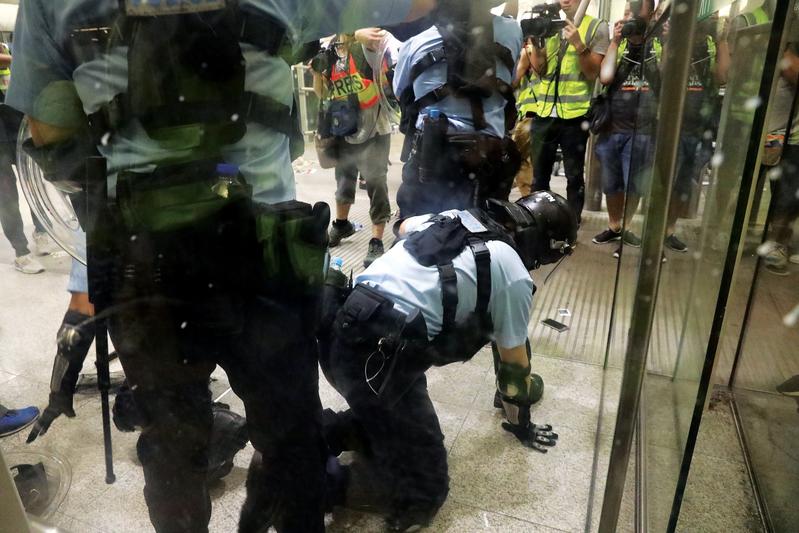 Police officers drop to their knees after being attacked by protesters inside the Hong Kong International Airport. (PHOTO / CHINA DAILY)

HONG KONG - A spokesperson for the Permanent Mission of the People’s Republic of China to the UN has expressed dissatisfaction and firm opposition to the wrongful remarks on the Hong Kong Special Administrative Region by a spokesperson for the UN High Commissioner for Human Rights (OHCHR).

In a statement issued on Tuesday, the Chinese spokesperson said remarks made by the OHCHR spokesperson had sent a wrong signal to the violent criminal offenders.

These (recent radical demonstrations) are not only serious crimes of violence, but showed a tendency of resorting to terrorism, according to the spokesperson for the Permanent Mission of the People’s Republic of China to the UN

The Chinese spokesperson said that demonstrations in Hong Kong have recently turned violent, including vandalization of the Legislative Council and the Liaison Office of the Central People's Government in the HKSAR, desecration of the national emblem and national flag, paralyzing of the airport, smashing of public facilities and attacking police officers with the use of lethal weapons like petrol bombs and large-caliber shooting devices.

These are not only serious crimes, but showed a tendency of resorting to terrorism, according to the spokesperson.

“Their violence tramples the rule of law and public order in Hong Kong, threatens the life and property of Hong Kong citizens, and challenges Hong Kong's prosperity and stability and the principle of ‘one country, two systems’. This is not tolerable for any responsible government and will only be met with a firm hand in accordance with the law,” the Chinese spokesperson said in the statement.

In the statement, the spokesperson also recognized Hong Kong police force as the “backbone of Hong Kong's public order and rule of law”, saying that “their professionalism, restraint, and contribution in the effort to stop violence and turmoil is saluted and acclaimed by all those who cherish a peaceful life, including the overwhelming majority of citizens in Hong Kong.”

The spokesperson said in the statement that the Chinese central government firmly supported Hong Kong Chief Executive Carrie Lam Cheng Yuet-ngor and the HKSAR government in discharging their duties in compliance with the law and supports the Hong Kong police force and judicial organs in enforcing the law.

The spokesperson said in the statement that Hong Kong’s issues are China's domestic affairs and urged the OHCHR to immediately stop interfering in Hong Kong.

Meanwhile, on Wednesday, a spokesperson for the Chinese Mission to the EU called on the EU to stop making irresponsible remarks on Hong Kong affairs.

The remarks by a spokesperson for the Chinese Mission to the EU came after the European External Action Service (EEAS) -- the European Union’s diplomatic service  -- issued a statement which underlined the importance of engaging in a political process of broad-based and inclusive dialogue.

In a statement issued on Wednesday, the spokesperson for the Chinese Mission to the EU said Hong Kong affairs are purely China’s internal affairs and it is gravely concerned about the EU side making irresponsible remarks on Hong Kong in disregard of China’s objection.

ALSO READ: Commissioner's office hits out at US officials for meddling in HK affairs

“I want to point out that what happens in Hong Kong is now evolving into extreme violence. Any attempt to lump together the rigorously lawful exercise of duties by Hong Kong police with the extreme and violent offenses by the radicals is absolutely misleading and incorrect, to which we are firmly opposed,” the spokesperson said in the statement.

The top priority now in Hong Kong is to stop violence and chaos, and restore law and order, said the spokesperson.