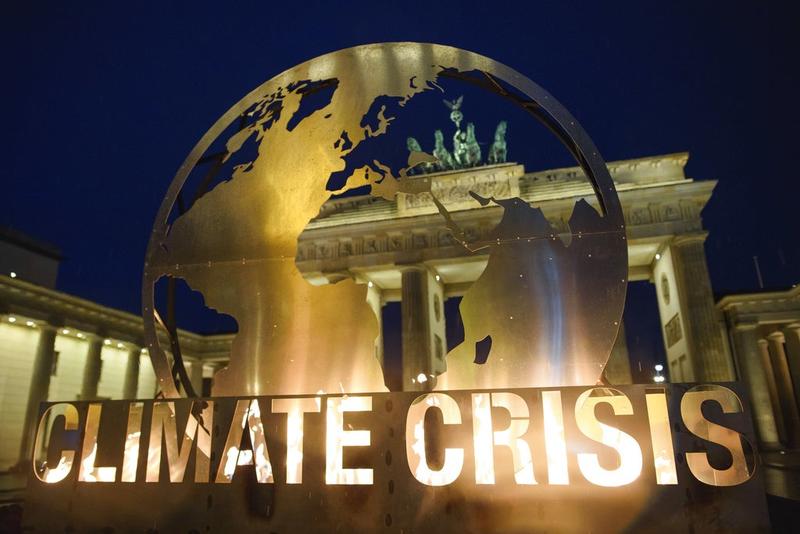 A metal sculpture sits in front of the Brandenburg Gate in Berlin Tuesday, Dec 11, 2018 as Greenpeace activists protest against Germany's strategy against global warming. (GREGOR FISCHER / DPA VIA AP)

KATOWICE, Poland — The world needs to "do more and faster" to prevent global warming on a scale that would cause irreversible environmental damage and hit poor societies hard, the head of the UN's top science panel on climate change said Tuesday.

Hoesung Lee, who chairs the Intergovernmental Panel on Climate Change, told diplomats at the UN climate summit in Poland that scientists had conducted an exhaustive review of data for their recent special report on keeping average global temperature increases to 1.5 degrees Celsius.

"The report shows that not just action, but urgent action is needed," Lee said.

His comments came as ministers and some national leaders gathered in Katowice for the final stretch of the two-week talks.

"Many issues still must be overcome. But I believe it's within our grasp to finish the job," said UN climate chief Patricia Espinosa.

Ministers are meant to bridge the remaining division between countries by Friday. One of the main aims of the meeting is for officials to finalize the rules of the 2015 Paris accord, including details such as how countries will record and report their emissions.

The talks are also meant to push countries to commit to more ambitious targets for reductions in greenhouse gas emissions.

While the pace of international negotiations on climate change has been slow, scientists say there is not much time left to ensure the 1.5 C threshold isn't crossed this century.

The IPCC report found that emissions of greenhouses gases such as carbon dioxide — produced through burning of fossil fuels — need to drop significantly by 2030 and reach near-zero by the middle of the century if the 2015 Paris accord's most ambitious goal is to be achieved.

"We are moving in the right direction in many areas, but we need to do more and faster," said Lee.

"Doing more now reduces reliance on unproven and risky techniques to remove carbon dioxide from the atmosphere," he said. "Doing less now would commit people today to the known risks of overshooting 1.5 C, with severe risks of irreversible loss of ecosystems and shocks to the basic needs of the most fragile human societies."

Ministers from dozens of countries took the floor Tuesday to speak in favor of more ambitious action. Protocol meant the United States isn't due to take the floor until later in the week, as it only sent a lower ranking official to the talks. The Trump administration has announced it's quitting the Paris accord but remains technically in until 2020.

American diplomats participated in a side event where countries exchanged their experiences of tackling climate change.

At the main meeting, the IPCC's chairman said scientists consider the building of new coal-fired plants to be an environmental and economic risk.

"Building coal and other fossil fuel power stations now commits governments to using that infrastructure for decades, running counter to our collective ambition," Lee said. "Or it risks wasting that investment by creating stranded assets."