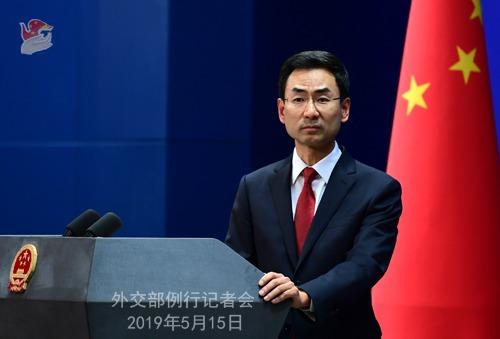 The Chinese economy is developing steadily and China is confident it can withstand any external risks and impacts, Beijing said on Wednesday, amid ongoing trade frictions with Washington.

The protectionist measures the United States takes will have a certain influence on China's economy, but they can totally be overcome

"The protectionist measures the United States takes will have a certain influence on China's economy, but they can totally be overcome," Foreign Ministry spokesman Geng Shuang said.

Geng made the remarks after US President Donald Trump claimed that China wants to reach a deal "badly" as it will lose investment due to the tariffs Washington has imposed.

READ MORE: Talks still possible but not on US terms

Such notions from the US are groundless and false, Geng said, adding that China's economy has been growing steadily and showing good momentum.

In the first four months of 2019, China's trade has expanded with partners such as the European Union, according to customs. During the period, China's imports and exports grew by 4.3 percent, and trade with the EU increased by more than 11 percent.

"China's trade partners are all over the world," Geng said. "If someone doesn't want to do business with China, naturally there will be others filling the vacancy."

Geng said China understands the concerns expressed by the international community over the latest round of tariffs from both sides. The escalated trade frictions are in no one's interests, he said, and will undermine the global economy.

The US "fired the first shot" of the tariff increase and has been "repeatedly applying maximum pressure", Geng said, while China has acted in self-defense.

ALSO READ: China responds by raising tariffs on US imports

Trade relations between China and the US, the two biggest economies, mean a great deal to the rest of the world, the spokesman said, adding that the US should have worked with China to promote the global economy, instead of choosing to unilaterally initiate a trade war.

"We hope the US will listen to the reasonable and just calls from the international community, understand clearly the situation and return to the right track as soon as possible, and work with China for a win-win deal based on mutual respect," Geng said. "This not only benefits the two countries, but also is a common aspiration of the international community," he said.