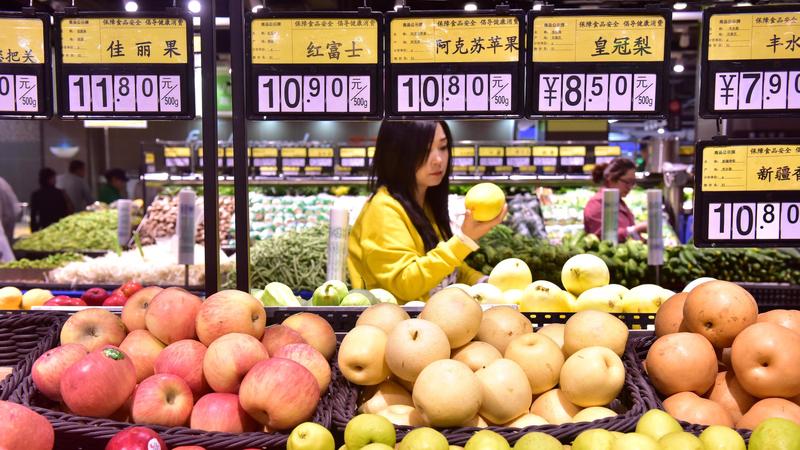 A customer chooses fruit at a supermarket in Shijiazhuang, Hebei province. The average price of seven common fruits from May 20 to 26 was 7.93 yuan (US$1.15) per kilogram, compared with 5.53 yuan during the same week last year. (JIA MINJIE / FOR CHINA DAILY)

In recent years, Chinese consumers have used the term "cherry freedom" to describe a person's ability to purchase expensive imported cherries without a second thought. Now, though, many are expressing concerns that they may be losing their total "fruit freedom" after sharp rises in the prices of many commonplace fruits, including apples, pears and peaches.

Many users of Weibo, a Twitterlike social media platform, said they were "shocked" by this year's "skyrocketing" fruit prices, and were worried that they would no longer be able to afford the commodity. Some said the rising cost had made them reluctant to peel fruit, as they didn't want to waste even the smallest part.

According to the Ministry of Agriculture and Rural Affairs, the average price of seven common fruits - Fuji apples, Kyoho grapes, pears, pineapples, bananas, watermelons and tangerines - from May 20 to 26 was 7.93 yuan (US$1.15) per kilogram, compared with 5.53 yuan during the same week last year.

The hot discussions about ‘fruit freedom’ reflect the fact that people are experiencing a consumption upgrade, which is also the fundamental factor driving the price surge

The data also show that the price has risen by about 38 percent from the first week of the year.

Zhou Yiran, from Nanjing, Jiangsu province, said she felt "angry" that grapes now cost about 20 yuan a box. "I buy grapes at least two to three times a week. They are a 'life necessity' for me, so I had never actually paid attention to the exact price before. But a small box of grapes used to cost about 12 yuan, now it's closer to 20 yuan," she said.

Han Xu from Beijing said: "I paid 16.80 yuan for two peaches. I really doubt they were made by fairies in heaven."

A member of staff at Guoxiang Siyi, a chain fruit store in Beijing, said the price surge has mainly affected year-round items.

"The price of seasonal fruit, such as cherries, hasn't changed much - it's mainly the year-round ones, especially apples. For example, we used to sell lower-end apples at 10 yuan per 1.5 kilograms, but this year we are selling them for 7 yuan per 500 grams," she said.

In the store, Fuji apples from Yantai, Shandong province, are priced at 14.80 yuan per 500 grams, while Xinjiang Aksu sweetheart apples are 16.80 yuan and peaches from Chengdu, Sichuan province, are 17.80 yuan respectively for the same amount.

"Every kind of fruit is expensive this year. There were bad frosts last year and the yield was badly affected," said Zhang Yuanhua, a grower who owns an orchard in Beijing's Pinggu district.

Song Qinghui, an economist with Qinghui, a think tank in Shenzhen, Guangdong province, said the sharp rise in the price of apples is mainly due to a cold spell that hit northern areas of China at the end of October and severely damaged crop yields.

"It led to unbalanced supply and demand for apples," he said, adding that apple production in the west of the country fell by nearly 50 percent, and some areas of Shaanxi province, the country's top apple-growing region, saw production fall by 80 percent.

According to Wu Jie, a fruit analyst with the Ministry of Agriculture and Rural Affairs, May and June are the months when inventories are at their lowest levels and seasonal fruit has yet to hit the market. Unsurprisingly, they are also the months when fruit prices are highest.

Wu said this year has seen the highest fruit prices since 2014. The number of apples and pears in storage has been low since late October, which meant supplies were sparse when May arrived. 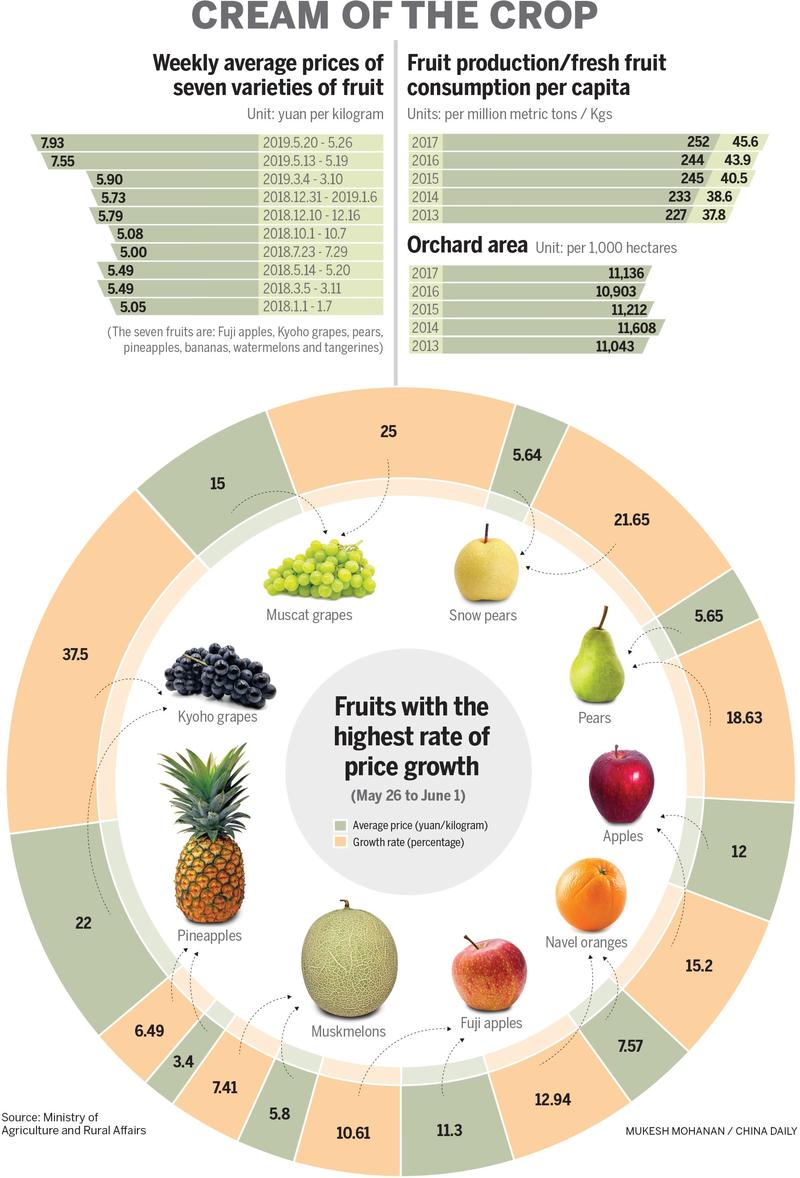 According to Wu's data, the inventory, or proportion of pears in storage, is less than 10 percent of the nation's annual production, while the figure for apples is less than 20 percent, compared with at least 30 percent in previous years. The proportion of good-quality fruit has also fallen this year, she added.

Although statistics show that prices have seen slight but steady growth over the past three years, the recent high prices have come as a surprise to consumers. That's partly because few people remember how much they paid in previous years, but they suddenly feel prices are much higher than usual.

To save money, many consumers have abandoned brick-and-mortar stores and turned to alternative suppliers.

Beijing resident Zhao Chenyi recently downloaded Pinduoduo - an e-commerce platform that allows users to join group-purchasing deals - so she can pay less for her fruit, while Wen Hong, also from Beijing, said he has stopped buying fruit at the market. He now buys it online, even though that means he cannot test the quality before purchasing.

Li Yi, from Xi'an, Shaanxi province, said she has started visiting an orchard in the countryside to pick cherries.

"The cost of the fruit plus the round trip is still cheaper than buying at the market," she said.

Wu said people's extreme reactions to the surge in fruit prices are partly due to the rise in demand as a result of China's rapidly developing economy.

"As incomes and living standards rise, fruit becomes a necessity for households. So, if the price rises, everyone's life may be directly affected," she said.

China is the world's biggest producer of fruit, and also a dynamic market for fresh produce. Imported goods, such as kiwifruit from New Zealand, cherries from Chile and durians from Southeast Asia, are earning an increasingly important spot on urban consumers' grocery lists.

In addition, global trends, such as the craze for "superfoods" - which are regarded as nutritionally dense and rich in antioxidants - have prompted consumers to buy more fresh organic fruit, and these special features are making the high prices of these fruit varieties acceptable.

Fruits that China leads the world in growing, such as apples, pears and watermelons, have a big price advantage in the global market, but their rising cost means the country is losing that advantage, which also explains the nationwide concern, Wu said.

However, Song, the think tank economist, believes the rising price of fruit is not necessarily a bad thing.

"The hot discussions about 'fruit freedom' reflect the fact that people are experiencing a consumption upgrade, which is also the fundamental factor driving the price surge. When people become more affluent, they demand finer, higher-quality fruit," he said.

He added that the good news for consumers is that prices are set to drop soon. For example, watermelons are coming into season, so the price is expected to fall sharply in August.

According to Wu, the overall price of fruit will fall slowly as more seasonal items hit the market, and it is certain that the inventory shortage will trigger a rise in production this year.

Song said, "In the future, as China undergoes a dramatic shift in consumption, the price of fruit will play a bigger and bigger role in overall commodity prices, and those changes will be more closely linked to the economic situation."