Ronaldo stuck on 99 goals but Portugal through to Euro 2020 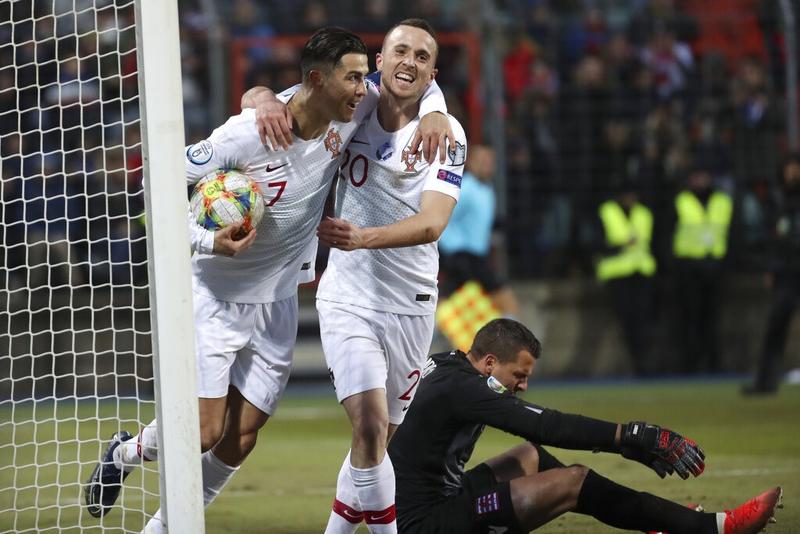 Portugal's Cristiano Ronaldo, left, celebrates with his teammate Diogo Jota after he scored his side's second goal during the Euro 2020 group B qualifying soccer match between Luxembourg and Portugal at the Josy Barthel stadium in Luxembourg, Nov 17, 2019. (FRANCISCO SECO / AP)

PARIS — Cristiano Ronaldo will have to wait a little longer for his 100th international goal, scoring only once as defending champion Portugal secured its place at next year’s European Championship with a 2-0 win at Luxembourg on Sunday.

The Juventus star needed two goals for a century, but could only bundle the ball in from inches out near the end of a closely-contested match on a bumpy and muddy field far removed from the pristine surfaces Ronaldo usually plays on.

The Juventus star needed two goals for a century, but could only bundle the ball in from inches out near the end of a closely-contested match on a bumpy and muddy field far removed from the pristine surfaces Ronaldo usually plays on

It moved Ronaldo 10 goals behind former Iran striker Ali Daei, who with 109 goals is the only player in world football to have outscored him on the international stage.

Portugal qualified automatically along with Group B winner Ukraine, which was already through and twice rallied to draw 2-2 at Serbia.

Serbia needed to win and hope Portugal failed to beat Luxembourg, but must now instead go through the playoffs to try and reach Euro 2020.

There was a century elsewhere, as France coach Didier Deschamps celebrated his 100th game in charge with a 2-0 win at Albania. It ensured France finished top of Group H ahead of Turkey, which won 2-0 at Andorra.

Group A winner England had already sealed its place and took its whopping goal tally to 37 in eight games with a 4-0 win at Kosovo thanks to a late flurry of goals after Harry Winks’ first-half opener.

ALSO READ: Ronaldo angry at coach Sarri after another substitution

The prolific Harry Kane got England’s second goal on the night to move atop the Euro 2020 qualifying scoring charts with 12 goals, one more than both Ronaldo and Israel’s Eran Zahavi.

It was Winks who put England ahead in Pristina after 32 minutes with a neat finish. Kane then made it 2-0 in the 79th before Manchester United forward Marcus Rashford and Chelsea midfielder Mason Mount added late goals.

Kane was still comfortably the oldest of the goal-getters — and he’s only 26 years old — with Winks 23, Rashford 22 and Mount just 20. 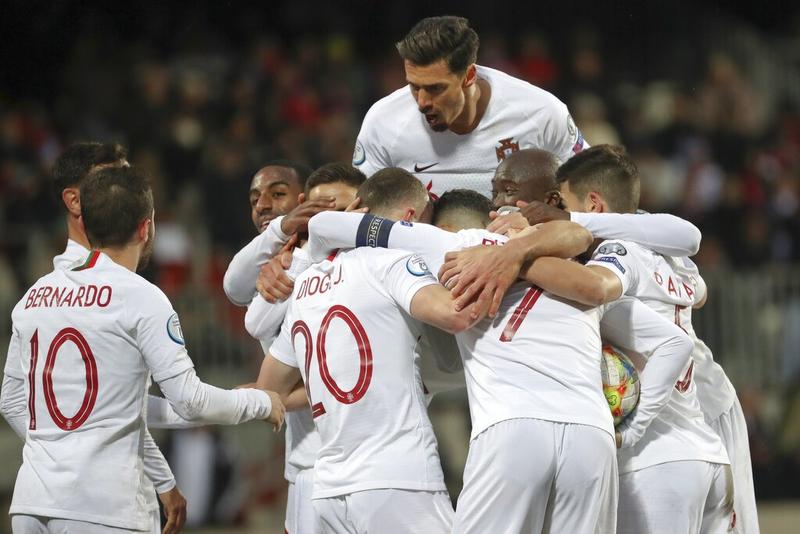 Portugal players celebrate after their teammate Cristiano Ronaldo scored their side's second goal during the Euro 2020 group B qualifying soccer match between Luxembourg and Portugal at the Josy Barthel stadium in Luxembourg, Nov 17, 2019. (FRANCISCO SECO / AP)

In the other Group A game, Bulgaria beat Czech Republic 1-0 in Sofia thanks to a second-half goal from defender Vasil Bozhikov.

Although the Czechs lost to Bulgaria for the first time, they had already qualified for next year’s tournament in second place.

Furious at being substituted in recent games by Juventus coach Maurizio Sarri, this time Ronaldo played the whole match — including four minutes of injury time — but he was largely quiet and ineffective. 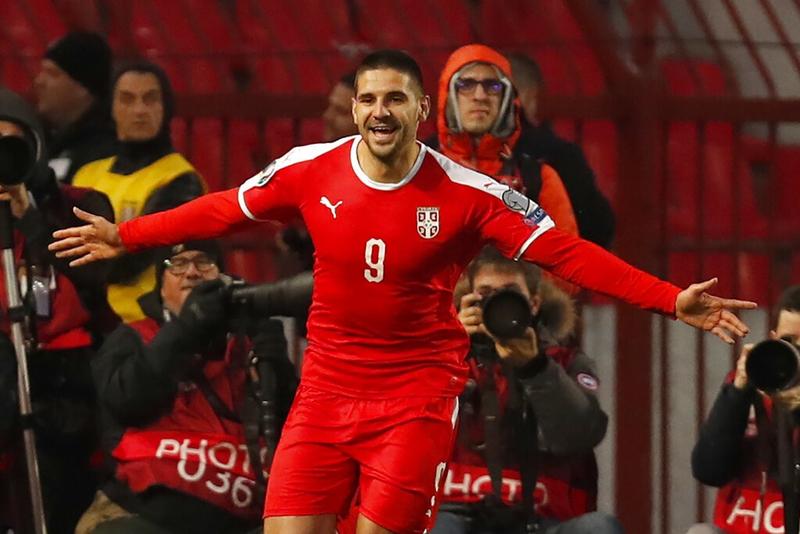 He stabbed teammate Diogo Jota’s scuffed effort over the line from inches out, when the ball might have rolled in anyway.

The goal was arguably the easiest he’s ever scored but came in the 86th minute, leaving him little time to reach 100. In his desperation Ronaldo cynically fouled a Luxembourg defender when trying to latch onto a hopeful long ball.

Serbia had to win and Ajax forward Dušan Tadić stroked home a ninth-minute penalty to give the home fans hope in Belgrade.

But Ukraine is unbeaten in qualifying for a reason, and showed its steel as center forward Roman Yaremchuk equalized in the 32nd. 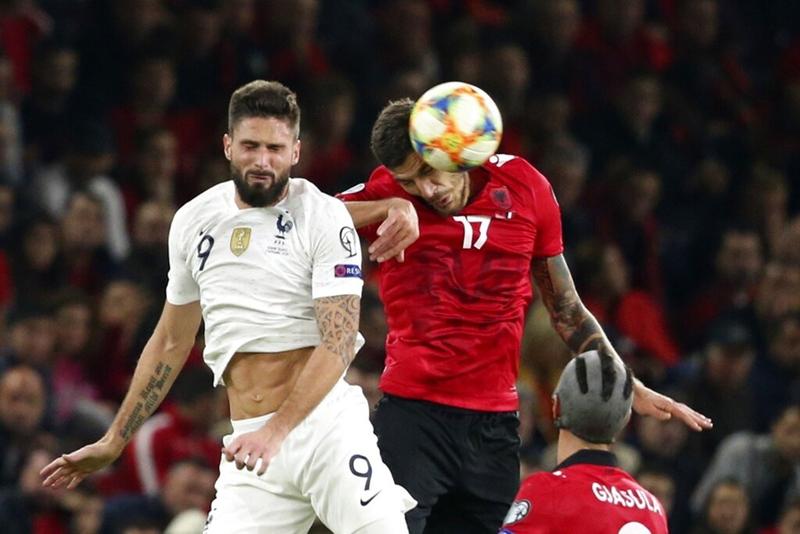 While Deschamps crowned his 100th game at the helm with a 65th win, there was also cause to celebrate Corentin Tolisso’s first international goal.

The Bayern Munich midfielder headed France ahead in Tirana after nine minutes, before Barcelona forward Antoine Griezmann ended a lean spell for Les Bleus with his 30th international goal in the 30th.

With France assuming control of the game, center forward Olivier Giroud went close to his 40th goal for his country but he was denied from close range early in the second half by goalkeeper Etrit Berisha’s stunning one-handed stop.

Giroud athletically surged forward into the penalty area, and then hit a powerful shot from about 10 meters which Berisha palmed away despite being off balance as he fell backward.

France finished two points ahead of Turkey and six clear of third-place Iceland, which won 2-1 at Moldova in the group’s other game and could yet secure a playoff spot.

Midfielder Gylfi Sigurdsson scored Iceland’s winner midway through the second half, and soon after had a penalty saved at Stadionul Zimbru in Chisinau.