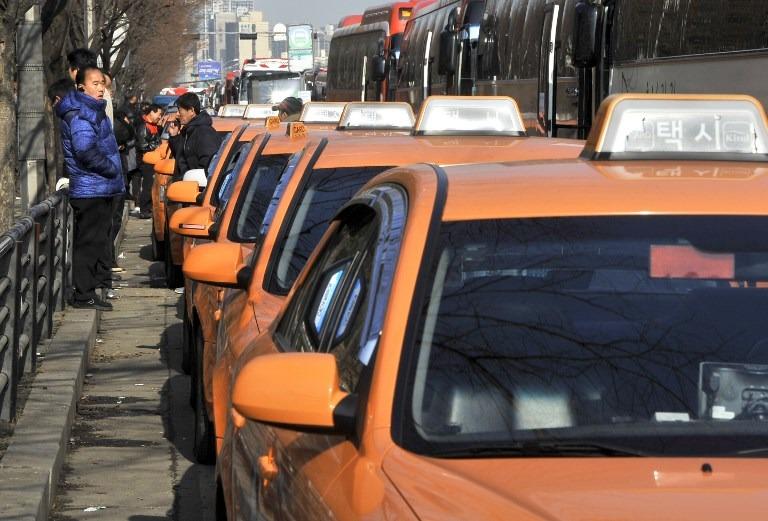 South Korean drivers stand beside taxis taking part in a one-day strike near the National Assembly in Seoul on Feb 20, 2013. (JUNG YEON-JE / AFP)

SEOUL — Tens of thousands of South Korean taxi drivers walked off the job and held a rally on Thursday to protest against a carpooling service that they say would destroy their jobs and threaten their livelihoods.

Opposition from taxi drivers and regulations in S. Korea have hampered the introduction of new transport services such as those offered by US-based Uber Technologies

The demonstration came days after the suicide of a taxi driver who set himself on a fire to protest against plans to introduce car-pooling service Kakao Mobility, a unit of mobile messenger operator Kakao Corp.

"If the service is implemented, my income will shrink by half. I'll fall into poverty," said driver Yoon Woo-seok, 62, at the rally in front of the National Assembly in the capital, Seoul.

Kakao postponed the official launch of its service after the suicide.

"We will have continued consultations with the industry, parliament and the government," the company said on Thursday.

"My entire family is scraping a living on my tiny income," said another protesting driver, Lee Nam-soo, 67.

"There's no way I can survive if Kakao operates."

The ruling party has created a task force to resolve the dispute, but it has not been able to agree on a compromise plan with the drivers.