In this July 17, 2014 file photo, a man walks amongst the debris at the crash site of a passenger plane near the village of Hrabove, Ukraine. An international team of investigators building a criminal case against those responsible in the downing of Malaysia Airlines Flight 17 is set to announce progress in the probe on June 19, 2019, nearly five years after the plane was blown out of the sky above conflict-torn eastern Ukraine. (DMITRY LOVETSKY / AP)

NIEUWEGEIN, Netherlands/KEIV— The international investigation team into the 2014 downing of Malaysia Airlines Flight 17 charged three Russians and a Ukrainian separatist with the murder of 298 people on board the plane that was shot down over Ukraine.

The team said that even if the four may not have pushed the button itself to launch a Buk missile that downed the plane, they were implicated in the preparations of the launch, making it sufficient to charge them.

The announcement of the prosecution team further pointed fingers at the Russian authorities and they called on further cooperation from the government.

They said that they did not ask for the extradition of the four since the Russian Constitution prohibits it.

Still, prosecutor Fred Westerbeke said "in the short term we will ask Russia to hand the summons to the suspects." He added that we will "ask for Russia to cooperate again with legal help."

Ukrainian President Volodymyr Zelenskiy said on Wednesday he welcomed murder charges brought against four suspects and said he hoped they would stand trial.

"Ukraine welcomes the conclusions of the Joint Investigation Team on MH17. The President of Ukraine hopes that ... those who are guilty of this brazen murder of innocent children, woman and men, will be put in the dock," Zelenskiy said in a statement. 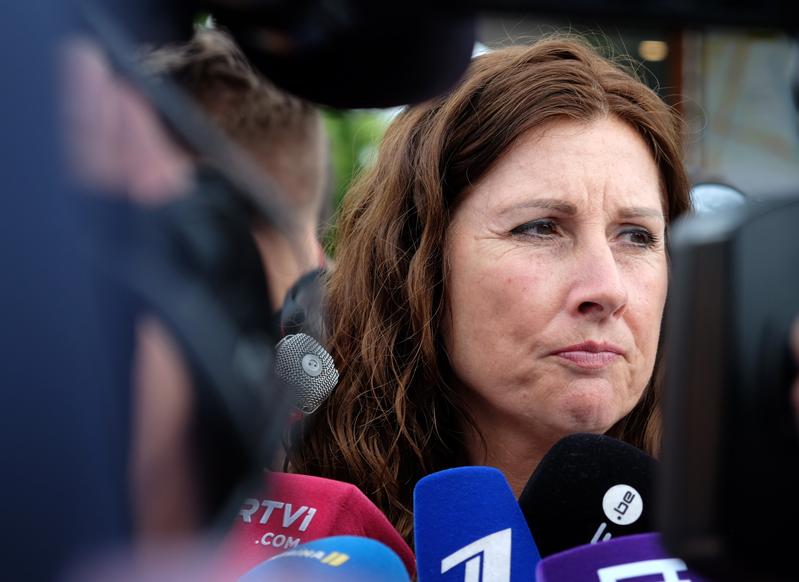 Silene Fredriksz-Hoogzand speaks to the media in Nieuwegein, Netherlands, June 19, 2019, after being informed by international prosecutors that four suspects have been identified in the international criminal investigation into the downing of Malaysia Airlines Flight 17. (MIKE CORDER / AP)

Silene Fredriksz-Hoogzand, whose son Bryce was among the dead, expressed relief that five years after the plane was blown out of the sky above conflict-torn eastern Ukraine, a trial could finally start next year.

"This is what we hoped for," Fredriksz-Hoogzand said. "This is a start of it. It is a good start."

She added that she did not expect any of them to appear for the trial, due to begin on March 9.

All 298 passengers and crew on board the flight from Amsterdam to Kuala Lumpur were killed on July 17, 2014, when a missile shattered the Boeing 777 in midair, sending debris and bodies raining down onto farms and fields of sunflowers.

The families of those killed were informed of the trial date early Wednesday at a closed-doors meeting ahead of a news conference by investigators.

The investigation team, made up of detectives and prosecutors from the Netherlands, Malaysia, Australia, Belgium and Ukraine, last year said that it was convinced that the Buk missile system used to shoot down flight MH17 came from the Russian army's 53rd Anti-Aircraft Missile brigade, based in the Russian city of Kursk.

Russia has always denied responsibility for shooting down the flight and claimed last year that the Buk missile came from Ukrainian army arsenals. The Netherlands and Australia have said they hold Moscow responsible for providing the Buk missile system used in the downing.

Progress in the criminal investigation has been slow. The Joint Investigation Team, or JIT, appealed in September 2016 for witnesses to provide evidence that could help identify two men heard speaking on intercepted communications discussing movements of a convoy in the days before the attack.

At the time, the JIT said "there is no evidence that these calls are directly related to the shooting down of MH17."

The appeal said one man had the first name and patronymic Andrei Ivanovich and used the call sign "Orion" while communicating. The other communicated as "Delfin" and had the names Nikolai Fyodorovich. 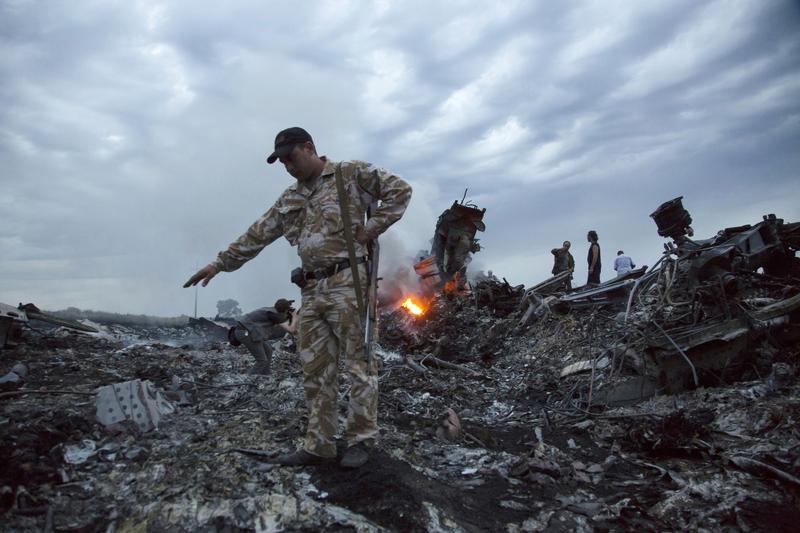 In this July 17, 2014 photo, people walk amongst the debris at the crash site of a passenger plane near the village of Grabovo, Ukraine. (DMITRY LOVETSKY / AP)

Online journalism platform Bellingcat said last year it had identified "Orion" as a Russian, Oleg Vladimirovich Ivannikov, and said it had determined with "very high certainty" that at the time of the downing of flight MH17 he was an officer of the main directorate of the general staff of the Russian Ministry of Defense, known as GRU, and that he served as a military adviser to pro-Russian separatists in eastern Ukraine at the time the jet was shot down and supervised "procurement and transport of weapons across the Russia Ukraine border."

In December 2017, Bellingcat said that, based on its investigations, it had established "to a high degree of certainty" that the man known as "Delfin" is Russian Col Gen Nikolai Fyodorovich Tkachev. He denied having been in Ukraine in 2014.

Bellingcat said in a tweet Tuesday that before the JIT press conference it will publish a report "identifying more individuals involved in the downing of MH17."

If Russian suspects are charged in the Netherlands, it remains to be seen if they ever appear for trial.

The Russian Constitution bars extradition of Russian nationals for trials abroad and says that for crimes committed abroad Russians can only be tried in Russia.

With input from Reuters