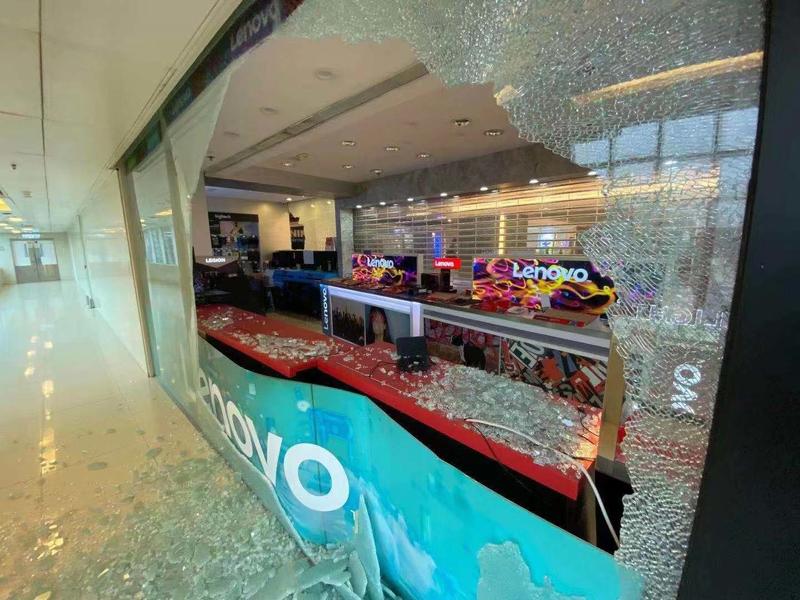 The glass window of a Lenovo store at Sha Tin's New Town Plaza is smashed by rioters on Sunday. (PHOTO / CHINA DAILY)

Rioters went on another wild rampage across Hong Kong on Sunday, seriously wounding a police officer and beating up two others on the 19th consecutive weekend of indiscriminate violence, which saw government offices and MTR stations again attacked and vandalized along with banks, shops, enterprises and offices with Chinese mainland connections.

In what’s seen as one of the most brutal attacks on a law enforcer, a police officer was slashed in the neck with a box cutter by masked protesters in Kwun Tong. He was bleeding profusely and was taken to United Christian Hospital. Two suspects were arrested on the spot.

In separate incidents, the police said two plainclothes officers were also set upon by mobs of rioters in Tseung Kwan O on Sunday evening, causing both to suffer head injuries.

In a statement, the police condemned what it called the rioters’ brutal attacks, reiterating it will take stern action and launch a thorough investigation into all violent acts.

The escalating violence by anti-government rioters flies in the face of remarks by US politician Ted Cruz, who’s on a brief visit to Hong Kong.

The Republican senator claimed on Saturday he had never heard of, or seen evidence of rioting, vandalism or mob attacks in Hong Kong which has been wracked by more than four months of civil unrest.

A spokesman for the Chief Executive’s Office decried the senator’s comments, saying it’s baffling for Cruz to say he has not seen the violence used by radicals since the protests erupted in early June.

Masked rioters have been seen attacking and vandalizing public facilities and shops, committing arson, hurling gasoline bombs, and attacking police and people with opposing views in various districts in the prolonged protests. In the first two months alone, about 200 police officers had been injured after being attacked by rioters.

The HKSAR government on Sunday strongly condemned the rampant violence, saying it has put public safety in great danger.

In view of the continued spread of violent acts by radicals, the government warned that the administration and police will deal with the situation resolutely in accordance with the law.

The Democratic Alliance for the Betterment and Progress of Hong Kong — the city’s largest political party — called the rioters’ behavior “frenzied”.

A group made up of cross-sector dignitaries that promoted the now-enacted anti-mask law condemned the worsening violence, saying it has created panic among residents and seriously affected people’s normal lives.

It urged the SAR government to immediately curb the violence with strong law enforcement and prevent the “broken windows theory” spreading in the city.

In Sunday’s rampage, rioters again targeted restaurants, stores and banks with Chinese mainland links across the city, set fires and erected barricades on streets at multiple locations across Hong Kong, Kowloon and the New Territories, and vandalized metro stations, forcing MTR Corporation to shut down train services at scores of stations.

Masked, black-clad rioters had responded to an online appeal to target shopping malls and assembled in different districts, including Sha Tin, Tseung Kwan O, Tsuen Wan and Mong Kok, to attack public and private properties by smashing glass windows, doors and machines and scrawling offensive graffiti on them. Some customers were trapped in restaurants during the attacks.

The rail operator suspended services on all metro lines, except the Airport Express Line, at 10 pm. The company warned that rail services may be halted indefinitely as facilities that have been severely damaged need to be repaired.