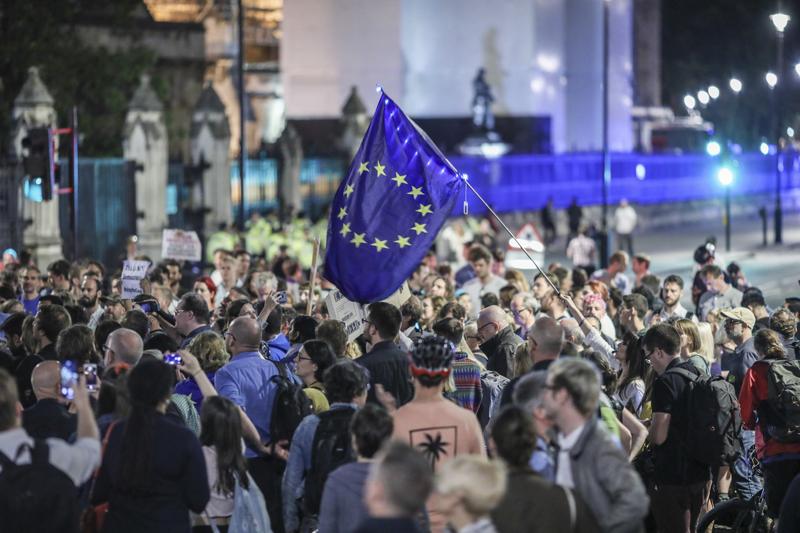 Anti-Brexit supporters continue to participate in a late evening protest in front of the Houses of Parliament in central London, Aug 28, 2019. (VUDI XHYMSHITI / AP)

LONDON — Thousands of people gathered in city squares across Britain Wednesday night to protest against Prime Minister Boris Johnson's announcement he is to suspend the House of Commons.

Opponents of Johnson claimed his decision, sanctioned by Queen Elizabeth, is a move deliberately aimed at curtailing the ability of MPs to stop him from taking Britain out of the European Union on Oct 31 without a deal.

The suspension of parliament, known as prorogation will start just days after MPs return Tuesday to Parliament after their summer recess. The new parliamentary session will begin on Oct 14.

A number of opposition MPs have written to the Palace to ask for an audience with the Queen to plead for the suspension plan to be overturned, according to social media messages Wednesday night.

As a public petition to parliament headed towards a million names, people gathered in London and in major provincial cities to protest at the move.

In Manchester's Albert Square, hundreds of protestors chanted "stop the coup" in one of the many quickly arranged protests.

The decision to suspend the British Parliament means the seat of government will essentially shut its doors until Oct 14 when the British monarch will deliver the Queen's speech to kick-start a new session of parliament.

Although there will only be two weeks until Brexit day, Johnson insisted in Downing Street Wednesday that politicians will have enough time to debate Britain's future in the EU.

Jacob Rees-Mogg, one of the senior MPs who held a meeting with Queen Elizabeth at Balmoral, her retreat in Scotland, defended the process.

He said: "It's the normal functioning of our constitution. The Government is working very hard to get a deal, as the Prime Minister has said."

Former Conservative prime minister John Major said he is seeking legal advice on whether he can challenge Johnson's decision to prorogue parliament.

In a statement Major said: "I have no doubt that the prime minister's motive in seeking prorogation is to bypass a sovereign parliament that opposes his policy. As events unfold I will continue to seek advice on the legality of this, and other matters, but will be making no further comment."

The campaign group, Another Europe is possible, organised a protest against the prorogation of parliament on College Green outside the Houses of Parliament. Some protestors marched along Whitehall to Downing Street.

The Metropolitan Police dispatched teams of riot cops to Westminster to ensure public order was kept.

As well as Manchester, anti-prorogation rallies took place in Leeds, Edinburgh and other towns and cities.

John Bercow, Speaker of the House of Commons, accused Johnson of committing a constitutional outrage by asking the Queen to suspend Parliament weeks before the Brexit deadline.

"However it is dressed up it is blindingly obvious that the purpose of prorogation now would be to stop Parliament debating Brexit and performing its duty," he said.

In Cardiff the Welsh Assembly's First Minister Mark Drakeford recalled assembly from its summer recess to discuss the suspension of the Westminster parliament.

Drakeford said the suspension of parliament was undemocratic and that Assembly Members in Wales should be able to speak for their constituents on the issue.

"What is clear from this action is that Johnson knows he doesn't have the support in Parliament," added Gethins.