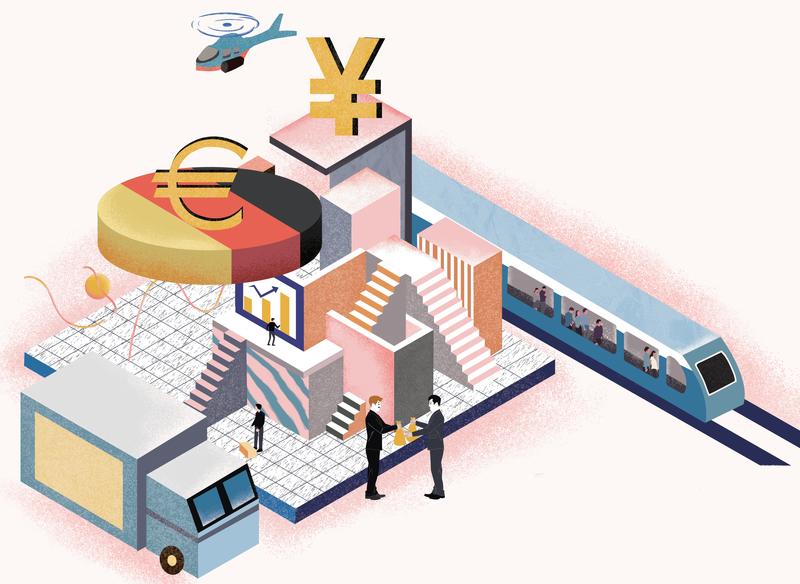 Last year witnessed robust economic and trade cooperation between China and Germany, as indicated in the frequent mutual high-level visits as well as the increasing interactions between the two nations’ enterprises.

Top-level visits and exchanges are key to the political mutual trust between the two countries. On May 24-25, German Chancellor Angela Merkel visited China for the 11th time since she first took office.

During the visit, both sides agreed on various issues such as expanding trade and investment, and promoting cultural exchanges. In Shenzhen, a city firmly associated with China’s opening-up, Merkel spoke on forging a closer partnership to nurture innovation in the digital age, so that China and Germany are better prepared for the future.

From July 8 to 10, Chinese Premier Li Keqiang led a delegation to Germany to host the fifth round of China-Germany Inter-Governmental Consultation, and also made an official visit to the country.

During his trip, China and Germany signed a raft of agreements worth some US$30 billion, covering a number of fields. Li and Merkel issued a joint declaration entitled Responsible Partners for a Better World, demonstrating both sides’ goodwill and resolve to further strengthen economic ties.

From Nov 25 to 28, Vice-Premier Liu He visited Germany and met with Merkel. On behalf of their respective governments, they exchanged insights on strengthening cooperation on finance, trade and investment.

The strengthened understanding between the Chinese and German governments has injected vitality into the cooperation at the local level and in the business sector.

The city of Liuzhou in the Guangxi Zhuang autonomous region hosted the 2018 China-Germany Intelligent Industry Development Forum in June. At the forum, a memorandum on industrial technology innovation alliance and cooperation was signed, and the Chinese-German Liuzhou Industrial Park was launched.

On Sept 25, the China-EU (China-Germany) Forum for Economic and Trade Cooperation was held in Beijing to discuss best practices to strengthen bilateral cooperation mechanisms in the context of the Belt and Road Initiative, to seize the opportunities offered by aligning Chinese reform and opening-up with the Industry 4.0 strategy of Germany.

At the forum, the establishment of both the China Office of the German Federal Economic Committee and the Sino-German Economic Cooperation Development Promotion Committee was also announced.

In 2018, the cooperation between companies, especially automobile manufacturers, continued to increase. To better tune in to the Chinese market, on July 9, Germany’s BMW Group and China’s Brilliance Group signed a strategic framework agreement on the long-term development of BMW Brilliance.

Both agreed to the investment plans for BMW Brilliance, and the research and development and manufacturing strategy for new energy cars.

The next day, BMW Group and Great Wall Motor established a joint-venture Spotlight which will introduce the production line for BMW Mini electric cars to China, a move to gain a share of the booming Chinese market for new energy vehicles.

Cross-industry cooperation between Chinese and German companies has also increased. Huawei and Audi signed a memorandum of understanding in July on in-depth cooperation in autonomous driving, digital service development and the intelligent internet of vehicles.

New energy technology company Ningde Times signed an investment agreement with the state government of Thuringian in July to establish a battery production base and an R&D center for intelligent manufacturing technology in Erfurt.

The second China-Germany Automobile Conference was hosted in Nanjing, Jiangsu province, on Nov 29. Participants held constructive discussions about potential cooperation and exchanges regarding the intelligent electric automotive industry and the optimization of conventional auto parts, with a raft of agreements signed.

Data from Chinese Customs show that from January to November 2018, the volume of China-Germany bilateral trade reached US$168.98 billion, accounting for nearly 4 percent of China’s total imports and exports.

Specifically, China’s exports to Germany were US$70.457 billion, accounting for 3.1 percent of China’s total exports and 28.99 percent of Germany’s total imports.

The pace of bilateral trade growth slackened in the first 11 months of 2018 compared with the corresponding period of 2017. Bilateral trade volume between China and Germany increased by 13.7 percent year-on-year in 2017, while the growth rate for the same period the following year was only 8.1 percent.

China’s exports to Germany increased by 11.9 percent year-on-year in 2017, while the figure in 2018 was only 6.7 percent. However, the momentum is steady, without any significant fluctuations, which shows great potential and broad prospects for economic and trade cooperation between China and Germany.

To sum up, 2018 saw a continuation of the stronger trading cooperation and closer economic ties between the two nations. The diversified, multilevel and multidimensional cooperation will pave the way for both countries to maintain the positive momentum in their relationship.

It is projected that China and Germany will come even closer economically in 2019. On the one hand, cooperation in high-end manufacturing such as automobile and machinery industries will become tighter; while on the other, cooperation in 5G and new energy applications will be gradually pursued. Thus the prospects for cooperation will become even brighter.

The author is a researcher of the German Studies Center and associate professor of the School of Economics & Management, Tongji University. The author contributed this article to China Watch, a think tank powered by China Daily. The views do not necessarily reflect those of China Daily.