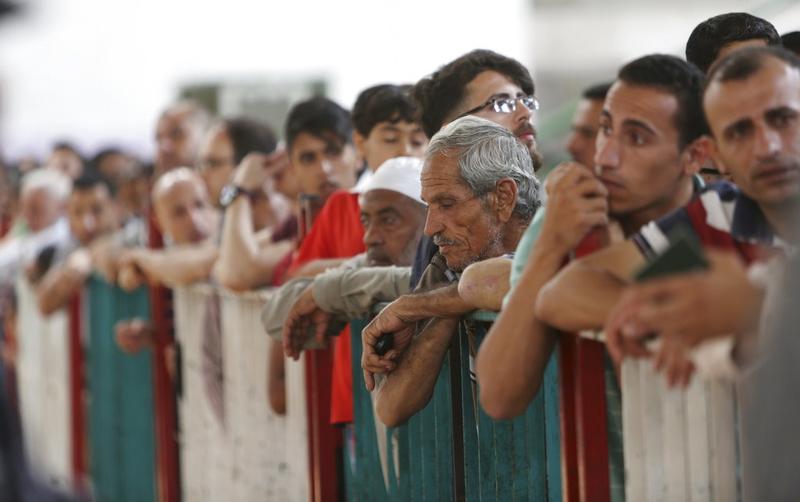 This May 22, 2018 file photo shows Palestinians waiting to cross the border to the Egyptian side of Rafah crossing with Egypt, in Khan Younis, in the Gaza Strip. (ADEL HANA / AP)

UNITED NATIONS — The United Nations implored member countries on Monday to fill a critical funding gap that the Trump administration created by sharply cutting the US contribution to a program that helps Palestinian refugees across the Middle East.

The UN held a conference to raise money for basic services — from food assistance and medical care to sanitation — for 5 million refugees in the Gaza Strip, the West Bank, Jordan, Lebanon and Syria.

After the session, the United Nations was still tallying how much was pledged by which countries against this year's shortfall of US$250 million facing the UN Relief and Works Agency for Palestinian Refugees, which leads the relief efforts.

READ MORE: As aid dries up, Gaza families get pushed deeper into poverty

UN officials said the United States, the program's top donor, gave US$364 million to the agency last year but only US$60 million this year. Pierre Krahenbuhl, the agency's director, said the cut is endangering basic services such as food assistance in Gaza and medical clinics spread among the five areas, while about 500,000 children may not be able to start the school year.

"The situation of Palestinians is defined by great anxiety and uncertainty, first because Palestinian refugees do not see a solution to their plight on the horizon," he said at a briefing before the conference.

In Gaza, nearly 2 million men, women and children already are experiencing extreme shortages of water and electricity amid tensions that have worsened between the Palestinians and Israel since President Donald Trump opened a US Embassy in Jerusalem.

READ MORE: For Palestinians, US Embassy move a show of pro-Israel bias

His administration announced in January that it was withholding US$65 million of a planned US$125 million funding installment for the relief agency.

At the time, Trump tweeted that he saw no reason to spend so much American money in return for what he called "no appreciation or respect" from Palestinians.

Agency spokesman Christopher Gunness has said the actual cut was around US$300 million because the US had led the agency to believe it would provide US$365 million in 2018. The US government released US$60 million in January so UNRWA could pay teachers and health workers and keep schools and medical services open in Gaza and the West Bank, but made clear that US donations would be contingent on major reforms.

State Department spokeswoman Heather Nauert said last week that the agency needs to "determine a way to better manage its budgeting and its finances."

The agency was created after the war that followed the birth of Israel in 1948, with about 700,000 Palestinians living there either fleeing or being forced from their homes. The UNRWA now faces its worst crisis in nearly seven decades, Krahenbuhl said.

In a report to the Security Council earlier this month, UN Secretary-General Antonio Guterres said the desperate humanitarian situation in Gaza is compounded by the potential suspension of UN programs, which are "a lifeline for Palestinians."