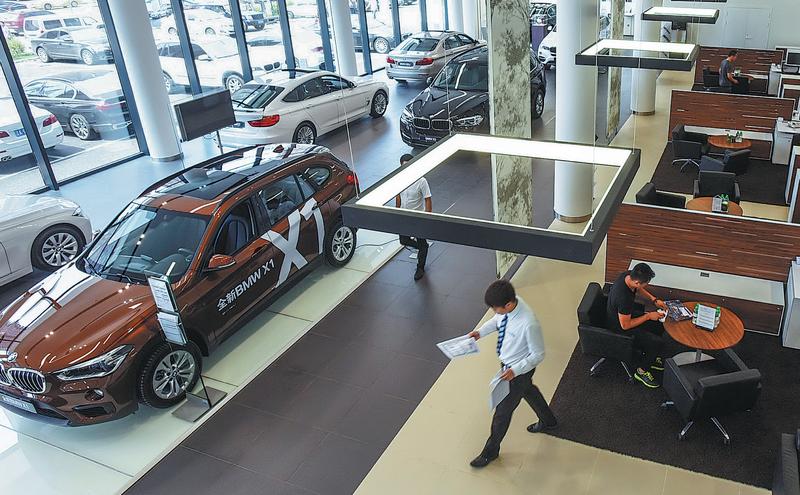 In this undated photo, cars await sale at a dealership in Shenyang, Liaoning province. (PHOTO PROVIDED TO CHINA DAILY)

With 2018 being the first year in almost three decades that negative growth has been recorded in China's auto industry, the country's car dealers are facing increased pressure to adjust their current business models, according to a top industry association.

A report released by the China Auto Dealers Chamber of Commerce last month showed that a total of 53.5 percent of dealers reported losses last year, with 27.1 percent of them recording consecutive yearly losses from 2016-18.

A report released by the China Auto Dealers Chamber of Commerce last month showed that a total of 53.5% of dealers reported losses last year, with 27.1% of them recording consecutive yearly losses from 2016-18

According to the report, 85 percent of dealers had not met carmakers' sales targets last year. Only dealers for Mercedes-Benz, GAC Toyota, BMW, Lexus, Chevrolet and Cadillac achieved their sales targets set by the car manufacturers.

The Vehicle Inventory Alert Index released by the of China Automobile Dealers Association showed that Chinese car inventories have hovered above the "alert level" for 15 months in a row, which means the depressed market has not shown an upward turn.

According to statistics from the China Association of Automobile Manufacturers, vehicle sales have fallen for nine months in a row since last July.

In March, sales were 2.52 million units, falling 5.18 percent on the same period year-on-year. Vehicle sales in first quarter stood at 6.37 million units with a decrease of 11.32 percent compared with last year.

In spite of the declining auto sales, the number of authorized 4S auto centers, covering sales, spare parts, service and surveys, increased 3.9 percent year-on-year to 29,664 by the end of 2018, according to CADA.

In the meantime, with China announcing it is to reduce the value-added tax in the manufacturing sector from April and automakers offering discounts in China's vast rural areas, passenger vehicle prices keep falling, which lowers dealer profit margins.

It is also reflected by the China Passenger Vehicle Market Price Index released in March by CAAM, which showed a downward turn in vehicle prices last year and in January this year.

Dealers of Chinese independent brands are under greater pressure.

Mei Songlin, an industry analyst, was quoted by the Economic Observer that most Chinese brands are positioned in the low-end market with a narrow profit margin, which makes them more susceptible to profit loss in a depressed market.

Dealers of BAIC Huansu said that they have to sell vehicles at half or even less than half of the market price.

Under such circumstances, car manufacturers are making efforts to help dealers lift their businesses. One of those ways is assisting dealers in providing more versatile and diversified services for consumers.

Dealers can consider the new energy vehicle and pickup truck market in some regions. Mergers and acquisitions of dealers in the same region can also assist in saving costs and increasing customer retention.

The enterprise sold 42,300 used vehicles, with a year-on-year increase of more than 20 percent. The gross profit of the financial insurance business of the company increased 23.4 percent to 1.35 billion yuan (US$200 million).

Auto dealer Zhongsheng Group expanded its revenue by 2.4 billion yuan in 2018 by providing insurance, financing and used car sales, going against the greater trend for dealers in the auto industry.

However, some industry insiders are not optimistic about these new business directions.

Taking the sharing vehicle business as an example, dealers have to invest lots of money on equipment and human resources, which cannot create profits in the short term.

Mei was quoted by the Economic Observer as saying: "Dealers can consider the new energy vehicle and pickup truck market in some regions. Mergers and acquisitions of dealers in the same region can also assist in saving costs and increasing customer retention."

Lang Xuehong, deputy secretary-general of CADA, said last month that dealers should control their stock with more caution, adding that dealers had stressed to her that they would suspend purchases once hitting inventory alert lines.