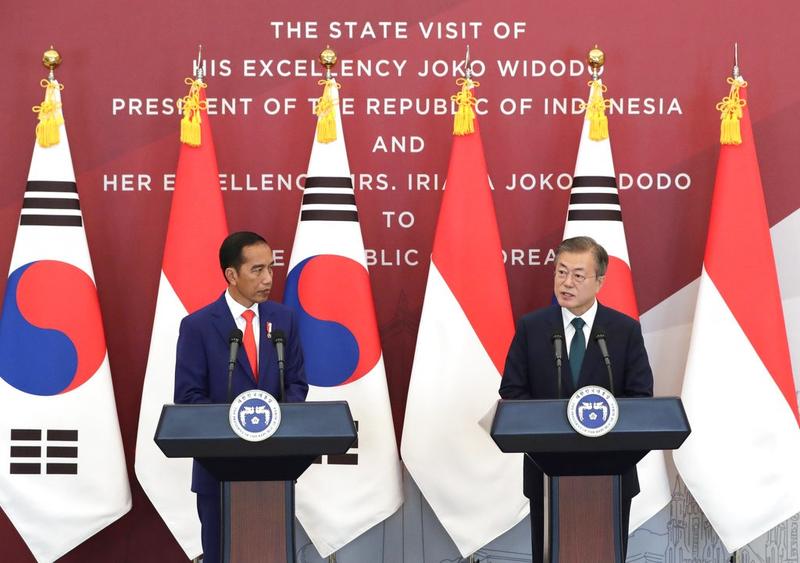 SEOUL - The Republic of Korea (ROK)'s President Moon Jae-in has asked his Indonesian counterpart to support efforts to achieve denuclearization of the Korean Peninsula.

Moon's office said he met with visiting Indonesian President Joko "Jokowi" Widodo on Monday and thanked him for assisting inter-Korean cooperation during the recent Asian Games in Indonesia.

Moon's chief of staff said the presidential Blue House sincerely asked National Assembly Speaker Moon Hee-sang and vice-speakers, as well as the heads of all five political parties, to accompany President Moon to the Pyongyang summit

On the same day, ROK's government invited key parliamentary leaders to the upcoming summit in Pyongyang between Moon Jae-in and Kim, which will be held for three days from Sept 18.

Im Jong-seok, Moon's chief of staff, told a press briefing that the presidential Blue House sincerely asked National Assembly Speaker Moon Hee-sang and vice-speakers, as well as the heads of all five political parties, to accompany President Moon to the Pyongyang summit.

Im said the government had led the inter-Korean exchange and cooperation in the past, but he noted that it would be more stabilized when the parliament joins the efforts.

After the first summit in April at the border village of Panmunjom, Moon and Kim signed the Panmunjom Declaration to completely denuclearize the Korean Peninsula, stop all hostile acts and increase inter-Korean exchange.

Moon's government asked the National Assembly to ratify the Panmunjom Declaration in order to implement it regardless of political situations here, but it failed to be passed through the unicameral assembly due mainly to the opposition from the Liberty Korea Party.

The Liberty Korea Party chief reportedly said earlier in the day that he would not accompany Moon to the Pyongyang summit.