Gold market moves to the East

By Lin Ting in Xiamen, Fujian

Led by China, the global gold market has moved from the West to the East, the CEO of the World Gold Council, Aram Shishmanian, told an industry forum on April 19.

And building on that position, China is assuming leadership in the world of gold, he said at the Global Gold Market Summit 2018 in Xiamen, East China’s Fujian province. “Your leadership, I have no doubt, will determine or help determine the structure and form of the evolving international gold market.”

The summit, the third of its kind, was organized by the Shanghai Gold Exchange (SGE) and the Xiamen Municipal People’s Government and gathered about 700 industry heavyweights and professionals from across the world.

Shishmanian noted that China was small in the gold industry 20 years ago but has gone through “spectacular transformation” — the result of a “very careful and deliberate strategy” supported by the People’s Bank of China (PBOC), the central bank.

At its heart, he said, is the formation of the SGE, combined with a series of liberalization policies and steps that created the conditions necessary for what we see today. Unlike any other country in the world, the Chinese industry covers all aspects of the gold market.

Over the years, China has been markedly improving its well-coordinated and orderly market operations, with its modes of operations more diversified, market access expanded, liquidity improved and pricing capability enhanced.

China has been the world’s largest gold producer, consumer, importer and processor, according to Song Xin, president of the China Gold Association.

“No matter whether in the production, processing and consumption of gold, or in related investment and transaction, we have the responsibility and capability in leading the healthy and harmonious development of the global gold market through international cooperation,” Song told the summit.

China saw its gold output decline 6 percent year-on-year in 2017 and drop nearly 3 percent in the first quarter of this year but still managed to keep its No 1 ranking in the world. Its consumption of gold, around 1,089 tons in 2017, was up by 9 percent.

Shishmanian pointed out that apart from investment, mining and the exchange, China has been the world’s leader in patents using gold technology, “the single largest country by many multiples”. Song said Chinese mining enterprises have been exploring new technology to pursue sustainable development.

Yet global challenges abound, especially when China is at the crossroads, including fragmented mechanisms, impact on investment by narrow interest groups, and infrastructure too domestically focused. Shishmanian raised three fundamental questions to be answered: How can China’s domestic gold market be further strengthened; how can China’s trade links prepare and participate in the global integration; and how can the gold market support the globalization of the yuan. 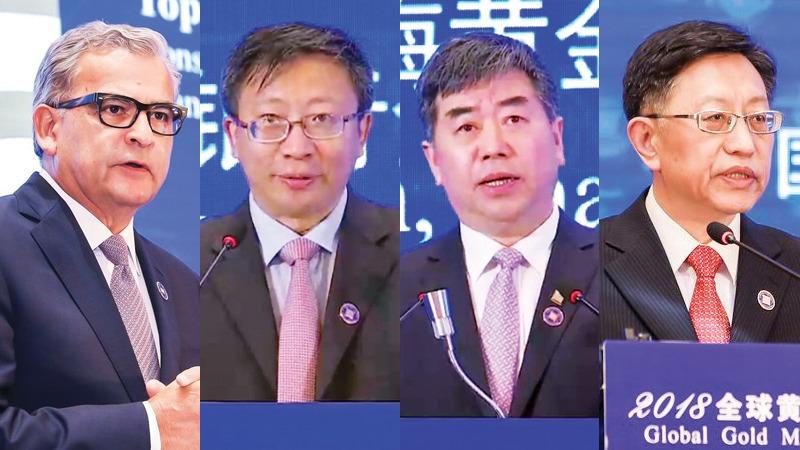 Song also acknowledged that China’s efforts toward maintaining a healthy market have been met with increasing uncertainties in global trade disputes and geopolitical crises.

He said China has to help build up global market mechanisms in order for the gold market to develop healthily and harmoniously. While encouraging the regional market to go global, he said standardization of basic criteria and even some regulations for the industry should be enhanced and promoted for wider acceptance so that the whole industry can adapt to new changes.

Moreover, there should be deeper cooperation among market players around the world, as all participants will be expanding links and integration to tap their own potential and achieve mutual benefits.

In his welcoming remarks in the morning, Jiao Jinpu, the SGE chairman, said the Shanghai Gold pricing has proven conducive to market health and the exchange is seeking further cooperation with global partners. It also inked a deal for strategic partnership with Moscow’s exchange on April 19.

The two-way opening-up of the gold market, flagged by the SGE, has drawn participants from outside the Chinese mainland while extending its role in the global mechanism, its pricing engaging more of the world’s businesses.

“Facing today’s complex situation, only constant reform and innovation can conform with the trend of the times,” Jiao said.

“An open path of internationalization should be followed,” he said. The SGE will stick to inclusive and balanced market operations, tap the potential of the international board and broaden international cooperation, especially with those in Dubai, Budapest, Malaysia and Myanmar, thus “bringing the gold market to a new era of openness”.

Jiao said the SGE will persist also in a path of marketization. Though there are still gaps with some Western exchanges, the Shanghai exchange will shift toward high quality development and be a pioneer in reforming its operations and services. It would expand yuan applications of Shanghai Gold and upgrade other precious metal trading.

Moreover, Jiao said the SGE will follow a regularized and sustainable path of development. To help prevent financial risks, the SGE will improve its membership structure, engage in efforts to fight against corruption, money laundering and tax evasion, and bring market standardization in line with sustainable mining businesses.

Orderly promotion of opening to the outside world will provide new and strong impetus to the country’s gold market, Ji Zhihong, director-general of the PBOC’s financial market department, told the forum.

In line with general guidelines on China’s opening-up, “we will continue to emphasize exchange and cooperation with markets from outside, further promote the opening of the gold market in a coordinated and orderly manner, tap more of the market vitality, and raise the quality of gold market operations”, Ji said.

“I believe the country’s gold market anticipates new space for development” due to China’s deepening of supply-side reforms, implementation of the Belt and Road Initiative and expansion of foreign exchanges, Ji told hundreds of guests from over 20 economies.

The deepening reform of market operations also requires updated and efficient monitoring and self-discipline of market players, so that normal and healthy market order can be guaranteed, Ji noted.

China’s rising demand has been in contrast to declines in Europe and North America, he said, and China’s engagement can better help the globalization of the gold market.

Executive Vice-Mayor of Xiamen Huang Qiang, while sharing the city’s opening-up experiences with guests at the forum, said Xiamen will contribute more to the new pattern of gold market development.

Also speaking at the summit were Les Male, CEO of the Dubai Gold & Commodities Exchange, the largest and most diversified derivatives exchange in the Middle East; Ruth Crowell, CEO of the London Bullion Market Association; a senior official from Russia’s central bank; and top executives of China Industrial Bank Co, Zijin Mining Group Co, Xiamen Gold Investment Co and Bank of Communications of China, among others.

On April 18, more than 100 people attended the 2018 International Members Conference of Shanghai Gold Exchange in Xiamen. Also held in the city was the SGE International Advisors Meeting. CEO of the exchange, Wang Zhenying, said it will strive to play a bigger role in the global market based on insights and experiences of the advisers.