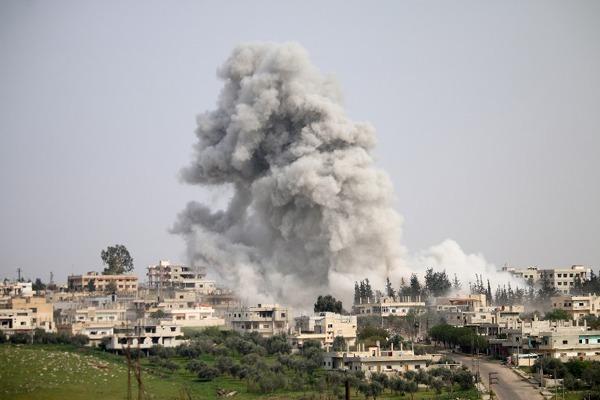 Smoke billows following a reported air strike on a rebel-held area in the southern Syrian city of Daraa, on April 8, 2017. (MOHAMAD ABAZEED / AFP)

BEIRUT - The Syrian army and its allies bombarded rebels in the southwestern Daraa region on Friday, killing at least six people, a war monitor said, in a region widely seen as a potential flashpoint for further escalation in the conflict.

The Syrian Observatory for Human Rights reported that the army had shelled the towns of Kafr Shams and al-Harah, near the border with the Israeli-occupied Golan Heights region.

The bombardment has led to the highest death toll from bombing since a "de-escalation zone" was agreed in southwest Syria last year by the government's ally Russia, along with Jordan and the US

It was the highest death toll from bombing since a "de-escalation zone" was agreed in southwest Syria last year by the government's ally Russia, along with Jordan and the United States.

President Bashar al-Assad has sworn to take back every inch of Syria and has been preparing an assault on rebels holding areas in the southwest bordering Israel and Jordan.

His military gains in the war have partly depended on support from Iran and allied Shi'ite militias including Lebanon's Hezbollah, which have provided ground forces.

Israel wants those forces removed from all of Syria, but is particularly sensitive to their presence near its frontier, and has carried out numerous air strikes against them. It regards Iran as its biggest external threat, and Hezbollah as the biggest threat on its borders.

The United States has also warned the government it would take "firm and appropriate measures" in response to any violations of the southwest de-escalation zone.

Any major battle in the area might risk a serious escalation in Syria's seven-year war, pitting Israel more directly against Iran and its allies.

On Wednesday, Assad said in an interview that his government was still pursing a political solution for the southwest, but would use military force if that failed.

A commander in the military coalition backing Assad also said this week that the preparations for an offensive in the area were complete, and that the government had installed new anti-aircraft defenses near the Golan Heights frontier.