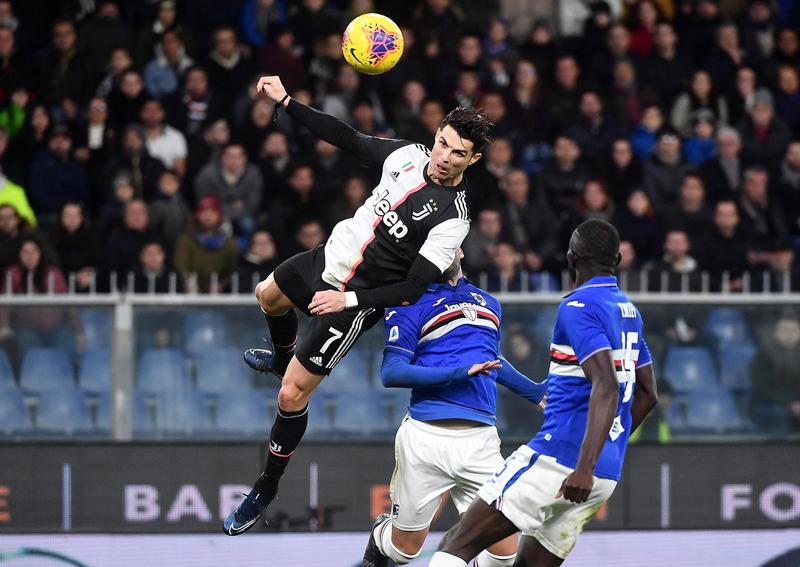 The Serie A title race could come down to which team has the best strike force.

Juventus has the superstar trident of Paulo Dybala, Gonzalo Higuain and Cristiano Ronaldo - the so-called Dygualdo. Inter Milan has Romelu Lukaku and Lautaro Martínez - aka LuLa.

Lazio is six points behind the top two but with a game in hand. But it is Lazio forward Ciro Immobile who is leading the goalscoring charts.

Immobile, who was top scorer in 2014 and 2018, currently has 17 goals in Serie A - five more than nearest challenger Lukaku.

Last Sunday's games were the final ones of 2019 and Serie A returns from its winter break on Jan 5, with the first of the round of 18 matches.

PLAYER OF THE SEASON SO FAR

Martínez has burst onto the scene this season after a quiet debut campaign for Inter.

Martínez scored nine goals in all competitions for Inter last season but has already found the back of the net 13 times in a formidable partnership with Lukaku under coach Antonio Conte.

Martínez and Lukaku’s partnership has been key to Inter reaching the top of the Serie A standings.

The 22-year-old Martínez has impressed so much that Barcelona is reportedly ready to activate the Inter forward’s 111 million euro (US$123 million) release clause.

Martínez signed a contract until 2023 when he joined Inter from Racing Club last year and there is already talk of improving that deal to keep the Argentina forward at the club.

SURPRISE OF THE SEASON

Unheralded Cagliari could be on its way to becoming this season's Atalanta in Serie A.

The Sardinian club has exceeded all expectations by joining the conversation for a spot in Europe, entering the break in sixth place despite losing its last two matches.

It’s among the team's best starts since Luigi Riva led the club to its only Italian league title in 1970.

The lucrative sale of prized midfielder Nicolò Barella to Inter Milan was a deal that could end up being worth nearly 50 million euros (US$56 million). It allowed Cagliari to spend a club record 18 million euros (US$20 million) to acquire midfielder Nahitan Nández from Boca Juniors, welcome back combative midfielder Radja Nainggolan in return from Inter in a loan deal and to sign striker Giovanni Simeone (from Fiorentina), midfielder Marko Rog (Napoli) and goalkeeper Robin Olsen (Roma) to loan deals.

GOAL OF THE SEASON

Ronaldo’s towering header might have made headlines around the world but there are several better contenders for goal of the season.

The best of the bunch at this stage is perhaps Goran Pandev’s stunning goal against Lecce for Genoa on Dec 8.

The Lecce goalkeeper’s attempted clearance came to the 36-year-old Pandev, who showed great instinct to control and immediately lob into an empty net from more than 40 yards out.

It was downhill from there for Pandev, however. His team let slip a 2-0 lead to draw 2-2 and the Macedonia forward was sent off for two yellow cards in quick succession.

Napoli has pushed Juventus all the way in recent years but this season it is Inter Milan which is threatening to wrest the title off the eight-time defending champion.

Conte’s arrival as Inter coach in the offseason has revitalized a team which has finished fourth the previous two campaigns.

Juventus and Inter headed into the winter break level on 42 points at the top of the table. Inter is top on goal difference although head-to-head is the first tiebreaker at the end of the season.

Whether Inter can stand the pace is an issue though, especially as a mid-season slump has become something of a tradition with the Nerazzurri.

Since 2013, Inter has only once managed to win more than one league match in January.

Conte has complained at several points this season of his squad’s lack of strength in depth and has said that was partly to blame for its exit from the Champions League.

Not having to compete in Europe’s premier club competition could aid Inter, although it will be involved in the Europa League.

Lazio is also not to be ignored, especially as it is the only team to have beaten Juventus this season - something it did in the league and the Italian Super Cup this month, and both by the same 3-1 score.

Lazio has won the Serie A title twice in its history, the last time in 2000.

While Juventus and Inter Milan look overwhelming favorites to get in the Champions League next season, the other two spots will likely be fought over by Lazio, Roma, Atalanta and Cagliari.

Lazio enters the break on an eight-match winning streak in the league and is in third place, one point ahead of Roma. Atalanta trails the Champions League places by four points in fifth while Cagliari is six points out in sixth.

Breccia is 18th in the 20-team league - trailing Sampdoria and Lecce by just one point - and will hope striker Mario Balotelli finds top form in the new year to lead it to safety.