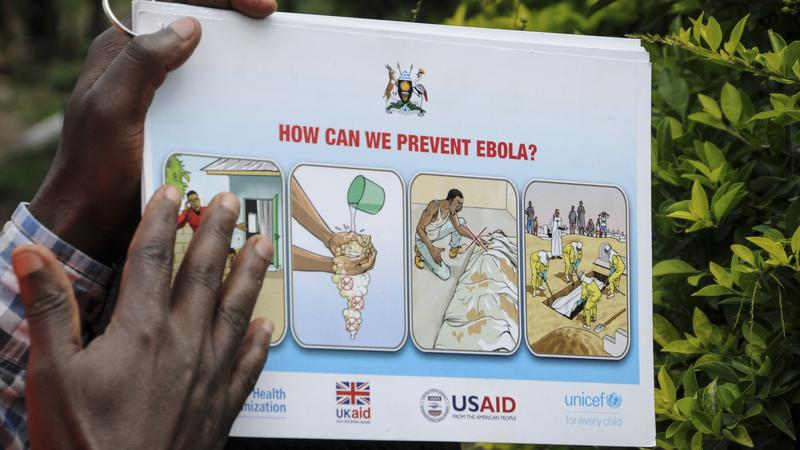 A health worker educates relatives of the 5-year-old boy who became Ebola's first cross-border victim, and other villagers, about Ebola symptoms and prevention, in the village of Kirembo, near the border with Congo, in western Uganda, June 15, 2019. (RONALD KABUUBI / AP)

China will send public health experts to Uganda and South Sudan at those countries' request to help prevent outbreaks of Ebola, director of the Chinese Center for Disease Control and Prevention said.

"They will start the trip very soon," said Gao Fu, without specifying the date.

The experts, including three to be sent to South Sudan, will work with local health professionals to bolster disease control and prevention at their borders with the Democratic Republic of the Congo

The experts, including three to be sent to South Sudan, will work with local health professionals to bolster disease control and prevention at their borders with the Democratic Republic of the Congo, including guiding them in the use of protective gowns and sterilization measures, he said in an exclusive interview with China Daily.

The World Health Organization declared the ongoing Ebola outbreak in the DRC a global public health emergency in July, following the death of an Ebola patient in Goma, a city of 2 million people on the border of the DRC, which raised concerns of the possible further spread of the virus to neighboring countries.

The DRC is grappling with the world's second-largest recorded Ebola epidemic. As of Saturday, more than 2,800 Ebola cases had been reported, including 1,888 deaths, since the outbreak was declared last August, according to the WHO. No confirmed cases of Ebola outside of the DRC have been reported in this outbreak.

"We have not received a request from the DRC, so we have not yet sent experts to that country," Gao said. "But we are making preparations and are very likely to send experts to fight Ebola at the forefront with local health workers in the DRC, after we receive a request."

"In addition to sending experts to the DRC, we are making plans to donate money and materials that will be used for Ebola control and prevention, including protective gowns and sterilization agents," he said.

The largest Ebola outbreak occurred in West Africa's Guinea, Liberia and Sierra Leone in 2014, causing more than 7,000 deaths by the end of that year, according to the WHO. China carried out its largest international medical assistance effort following the outbreak, providing money and materials worth $120 million and sending more than 1,200 public health and medical experts to those countries.

Cooperating with African countries in the fight against Ebola can also help prevent the disease from reaching China through reducing the chance of cross-border transmission, Gao said.

"Viruses, including Ebola, do not need a passport or visa to go to another country, and an international flight may cause transmission of the disease," Gao said.

"Although Ebola is acute and dangerous, it can be effectively treated at the early stages," he said. "It is important that high-risk groups, such as those who have returned from the affected countries in Africa, remain alert and go to hospitals for diagnosis and treatment if any possible symptoms occur."

Some Chinese hospitals specializing in infectious diseases started to make preparations for Ebola cases several years ago, and Gao said he is confident that Ebola outbreaks can be prevented in China in the event individual cases are reported.