Hand behind the Mao portrait 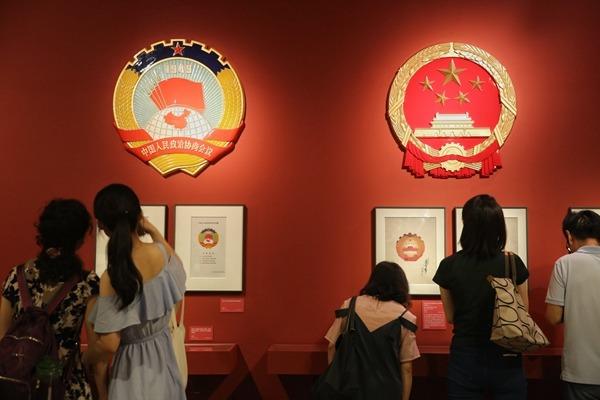 Visitors view emblems designed by Zhou Lingzhao and other artists at the ongoing show at the gallery of the Central Academy of Fine Arts in Beijing. (JIANG DONG / CHINA DAILY)

Zhou Lingzhao, who turned 100 earlier this year, is an artist whose contribution is legendry. His portrait of China's late chairman Mao Zedong hung on the outer wall of the Tian'anmen rostrum in Beijing during the founding ceremony of the People's Republic of China on Oct 1,1949.

"I will keep fit so that I can see more of the ever-changing world."

Some other prominent artists have been commissioned to create the artwork since then.

Zhou also served on the team that designed the national emblem. He worked as the art director of several parades held in the Tian'anmen Square area on such occasions as National Day and May Day. His paintings of historic events and mural designs adorn the interiors of many Beijing landmarks, including the National Museum of China.

Zhou was the chief designer of banknotes for the second, third and fourth series of the renminbi, the Chinese currency. And he designed postal stamps for the Year of the Dog in 1982 and again in 2018.

"He could have bragged about working on such major projects. But he didn't."

Despite his long and successful career, Zhou remains modest.

"People call me a painter, but I'm just a teacher," he once said. 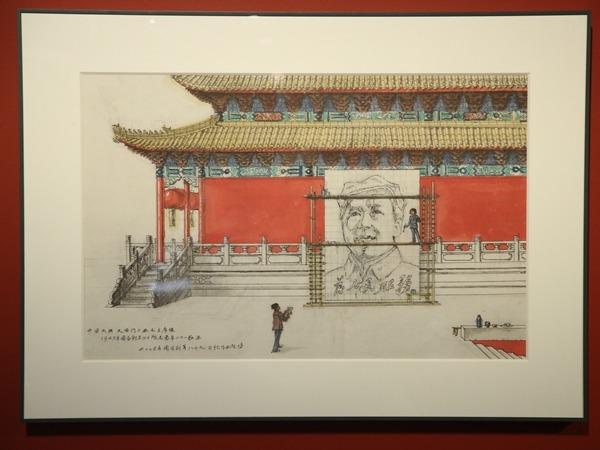 A watercolor painting by Zhou in 2008 re-creates the scene of him and his wife working on the Mao portrait. (JIANG DONG / CHINA DAILY)

Zhou joined the faculty of the Central Academy of Fine Arts in the late 1940s and worked there for several decades.

To celebrate this centenarian, the institute is holding the Art for a New China exhibition, which runs through Oct 7. This coincides with events marking the 70th anniversary of the founding of the PRC this year. Drawings, photos and texts about Zhou's participation in the design of New China's symbols are at the heart of the display.

Zhou inherited an interest in art from his mother, who was a painter. He began to receive formal art training at age 14. During the War of Resistance Against Japanese Aggression (1931-45), he joined a performance troupe that traveled in the country calling upon people to fight for national salvation. He designed stage art and performance posters at the time.

He was known to be quick in conceiving and executing paintings during his early days at the Central Academy of Fine Arts.

Zhou, then 30, was selected to paint Mao's portrait some 20 days before the founding ceremony. He recalls that, because the portrait was 6 meters high and 4.6 meters wide, Zhou, and his wife, Chen Ruoju, who's also an artist, worked with the help of a scaffold kept outside the rostrum's gate, and they climbed up and down and walked far away to monitor the work's progress.

The portrait was based on a well-known black-and-white photo taken by Zheng Jingkang that shows Mao smiling while wearing a hat, with his head slightly turned to one side.

Zhou recalls being asked to add the words wei renmin fuwu (serve the people) at the bottom of the portrait.

The couple completed the painting the day before the ceremony and returned home late. Zhou recalls that when they were about to go to bed, officials in charge of the ceremony visited and told them that, after seeing the portrait, then-premier Zhou Enlai and some other leaders suggested removing the words. 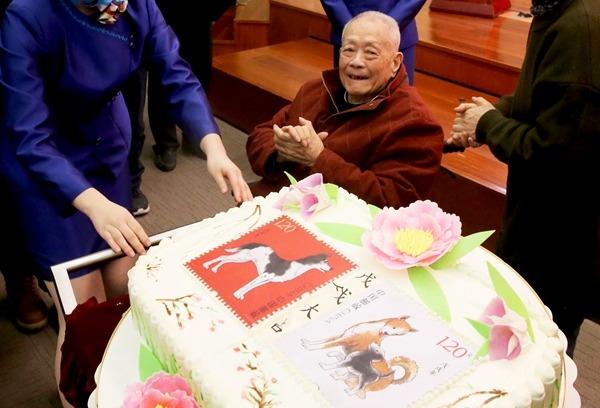 Zhou receives a cake in 2018, featuring two postal stamps he designed for the Year of the Dog. (JIANG DONG / CHINA DAILY)

"We rushed back to Tian'anmen Gate. With the help of spotlights, I climbed a long ladder, which was made of three separate parts, erased the characters and added new layers of paint to it. Then I came down," he recalls.

"We moved the ladder, and I climbed up to repeat the revision many times. I finished the corrections by dawn. It was only few hours before the ceremony."

Zhou was among the crowd of people who attended the founding ceremony.

"I saw the portrait from afar. It looked OK. Then I heard other people saying the painting was good. At that moment, I felt reassured and happy."

In 2008, he painted a watercolor that re-creates the scene of him and Chen working on the Mao portrait. The painting is part of the current exhibition.

Zhou Lingzhao recalls that in the factory's design room, they were provided with a catalog for reference that included a variety of patterns featured on many other countries' banknotes. But the team decided to use Chinese motifs on Chinese currency that reflect the country's artistic and cultural traditions.

"We went to the Forbidden City and Summer Palace to seek inspiration. We also traveled to the Yungang Grottoes in Shanxi province," he recalls.

"There, we painted copies of historical architecture, stone sculptures and statues, bronze ware and colorful floral patterns. And we researched styles of the Dunhuang murals."

The show features banknotes of which Zhou was the chief designer. (JIANG DONG / CHINA DAILY)

He says the patterned frames on 2 yuan and 3 yuan notes respectively were based on the mullioned windows of the Forbidden City and the ribbons on deities of the Dunhuang murals. He circled the denominations with patterns to resemble the shape of a traditional Chinese lamp.

In 2011, an exhibition dedicated to Zhou showed his paintings and designs of murals at the National Art Museum of China. A selection of these works are on display at the current exhibition. Some of the landscapes on show were done when he was in his 70s and 80s. He traveled in China and went abroad every year when he was in better health.

"I will keep fit so that I can see more of the ever-changing world," Zhou says. "If possible, I want to visit the Xiangjiang and Zijiang rivers that run through my native Hunan province and do some paintings of the landscapes there."

Among his many students is Han Meilin, an artist who was the chief designer of Fuwa, the mascots of the 2008 Olympic Games in Beijing.

"What I've learned from Zhou is that the only rule in the world of art is 'there are no rules'," Han says.