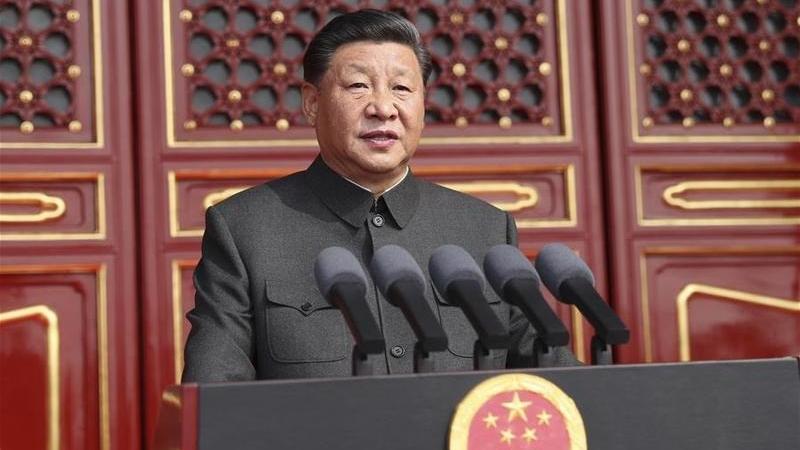 President Xi Jinping, also general secretary of the Communist Party of China (CPC) Central Committee and chairman of the Central Military Commission, delivers a speech at a grand rally to celebrate the 70th anniversary of the founding of the People's Republic of China at the Tian'anmen Square in Beijing, Oct 1, 2019. (PHOTO / XINHUA)

BEIJING — Chinese President Xi Jinping's speech on Tuesday's National Day celebrations has earned wide praise from overseas officials and scholars as he pledged that China will stay on the path of peaceful development, and pursue a mutually beneficial strategy of opening up.

"We will continue to work with people from all countries to push for jointly building a community with a shared future for humanity," Xi said in his speech.

"We will continue to work with people from all countries to push for jointly building a community with a shared future for humanity," Xi said

Echoing China's commitment to world peace and development, Dmitry Novikov, first deputy chairman of the Russian State Duma Committee on Foreign Affairs, said he is confident that the vision of a community with a shared future for humanity helps China create favorable conditions to ensure the successful realization of the Chinese Dream of national rejuvenation.

Jose Luis Robaina, a researcher at Cuba's Center for International Policy, a think tank, said that Xi's speech conveyed Beijing's visions of peaceful coexistence, win-win cooperation, and a community with a shared future for humanity to the world.

"China's foreign policy was oriented in building a peaceful world where cooperation is the driver of international relations," said Francesco Maringio, an Italian China expert.

The Belt and Road Initiative and other multilateral platforms launched and hosted by China in the past years, said Maringio, "give us the possibility to measure our ideas and proposals into a new dynamic and cooperative framework."

Anri Sharapov, associate professor of the Tashkent State Institute of Oriental Studies, said that China's development experience in the past 70 years "can be very useful" for Central Asian countries, including Uzbekistan.

China's vision of jointly building a community with a shared future for humanity is "of strategic importance in the further development of international and interstate relations," he said.

B R Deepak, a sinologist and professor at India's Jawaharlal Nehru University, said that Xi's pledge that China will stay committed to peaceful development indicates that "China will continue to work with other nations adhering to the policy of win-win cooperation, common prosperity and common security."