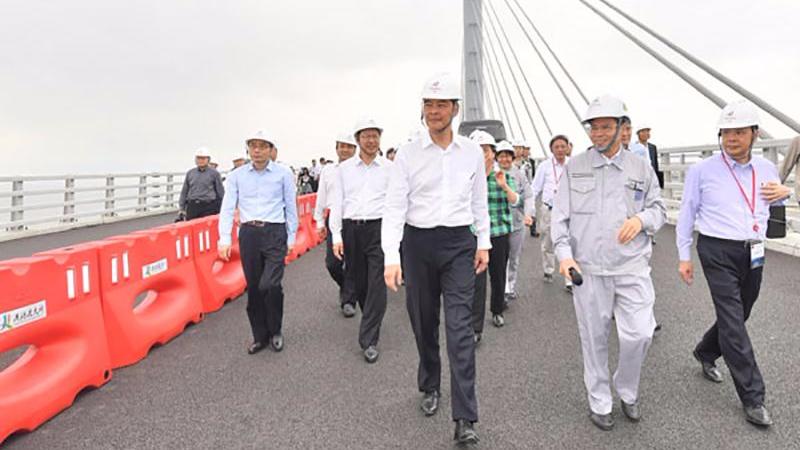 Chief Executive Leung Chun-ying (center) visits the west end of the Hong Kong-Zhuhai-Macao Bridge in Zhuhai on April 21, 2017 to learn about progress in the project as he leads a Hong Kong delegation visiting cities in the Guangdong-Hong Kong-Macao Greater Bay Area. (Information Services Department)

Speaking to the media before the weekly Executive Council meeting, Leung did not disclose the exact time and places of the visits and who will be participating the in the visits, saying that he would announce those later.

The Press Section of Chief Executive’s Office could not provide any further information at this stage.

In April, CE Leung led a delegation of senior officials and business leaders to visit six cities of the 11-city-cluster, most of which are on the west bank of the Pearl River Estuary. The cities are: Guangzhou, Foshan, Zhaoqing, Jiangmen, Zhongshan and Zhuhai.

Leung said after the visit, the society had shown great interests in the opportunities brought by the Bay Area to Hong Kong.

He noted that Hong Kong has played a significant role as a “super connector” since many foreign leaders and entrepreneurs based in Hong Kong have expressed their interests in the area, as well as obtain business opportunities through Hong Kong.

He called on the public to make personal visits to the area and witness the benefits brought by the Hong Kong-Zhuhai-Macao Bridge and the Guangzhou-Shenzhen-Hong Kong Express Rail Link to Hong Kong.

The state-level Greater Bay Area blueprint was put forward by Premier Li Keqiang when he delivered the Government Work Report to the National People’s Congress in March this year.