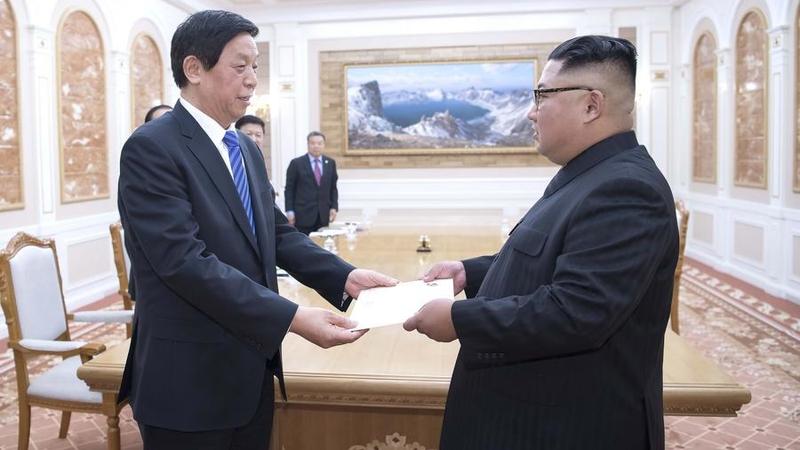 PYONGYANG - China's top legislator on Sunday presented a signed letter from General Secretary of the Communist Party of China (CPC) Central Committee and Chinese President Xi Jinping to Kim Jong-un, chairman of the Workers' Party of Korea (WPK) and chairman of the State Affairs Commission of the Democratic People's Republic of Korea (DPRK).

DPRK's socialist construction has taken on a new look in various fields as the country concentrates on the economic development and improvement of people's livelihood under the leadership of Kim Jong-un, Xi said

In the letter, Xi said the DPRK, under the successive leadership of Kim Il-sung, Kim Jong-il and Kim Jong-un, has made achievements on the course of the socialist construction in the past 70 years.

Currently, DPRK's socialist construction has taken on a new look in various fields as the country concentrates on the economic development and improvement of people's livelihood under the leadership of Kim Jong-un, Xi said.

It is an unswerving policy of the CPC and the Chinese government to safeguard, consolidate and develop China-DPRK relations, Xi said in the letter.

Xi said that he and Kim had reached important consensus during their three meetings this year, opening a new chapter in the development of China-DPRK relations.

Xi said he is willing to work with Kim to strengthen the China-DPRK relations, implement the important consensus reached by the two leaders and push for greater progress in bilateral ties.

Nothing that the 70th founding anniversary is a big event for the DPRK, Li said Xi attaches great importance to the event and dispatched a delegation to Pyongyang to send China's warm congratulations.

This year is of special historic significance for China-DPRK relations, said Li, adding that the three meetings between Xi and Kim had ushered in a new stage of bilateral ties.

China's firm commitment to the consolidation and development of bilateral ties will not change, nor will Chinese people's friendship towards their DPRK peers or China's support to DPRK's socialist course, Li said.

Li said his visit aims to implement the important consensus between Xi and Kim, enhance high-level strategic communication and have in-depth exchanges on further development of the relationship so as to strengthen China-DPRK ties.

On the Korean Peninsula issue, Li said that achieving lasting peace and denuclearization of the Peninsula accords with the trend of the times and the aspiration of the people.

China commits to the goal of the peninsula's denuclearization, safeguarding peace and stability of the region and solving problems through dialogue and consultation, said Li.

"We have high regards of the efforts the DPRK has made towards regional peace and stability," Li said, hoping that the DPRK and the US could implement the outcomes of their summit and work together to maintain peaceful talks.

Li said China is willing to work with relevant parties and play a role toward a political settlement of the Korean Peninsula issue.

Kim expressed his appreciation for Xi's letter and asked Li to convey greetings and best wishes to Xi.

Kim said Li's visit symbolized the deep friendship from the Chinese side and touched the WPK, the DPRK government and its people.

The traditional friendship created and nurtured by the the older generations of both countries' leaders have been the most valuable treasure, Kim said.

Recalling his three meetings with Xi, Kim said he felt in person the valuable and warm DPRK-China friendship, adding that the DPRK will firmly carry on and do its best to develop the friendship no matter how the international situation changes.

The DPRK is carrying out the new strategic line and focusing on the development of economy, said Kim, adding that his country expects to learn from China and further expand exchanges and cooperation in different fields so as to jointly promote the socialist course in both countries.

Kim said the DPRK adheres to the consensus reached during the DPRK-US summit and has taken measures in this regard while the US side should take corresponding actions to jointly promote the political settlement of the Korean Peninsula issue.

READ MORE: Xi calls on US, DPRK to start dialogue as soon as possible