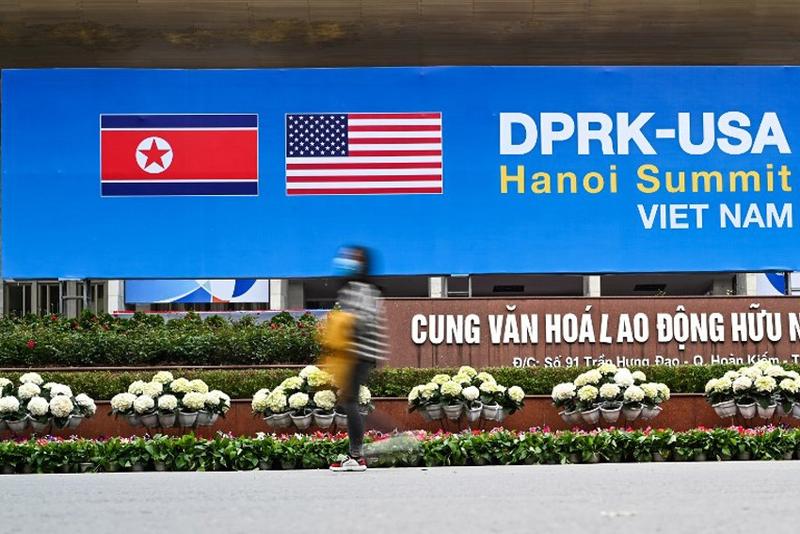 In this Feb 24, 2019 photo, a woman walks past a billboard for the upcoming second summit between US President Donald Trump and leader of the Democratic People's Republic of Korea Kim Jong-un, in Hanoi. (JEWEL SAMAD / AFP)

HANOI – The upcoming visit by Kim Jong-un, top leader of the Democratic People's Republic of Korea (DPRK), is the first by a DPRK top leader in 55 years to Vietnam, a top Vietnamese diplomat said Monday.

Le Hoai Trung, Vietnam’s Deputy Minister of Foreign Affairs, said at a press at the international media center that Kim, chairman of the Workers' Party of Korea and chairman of the State Affairs Commission of the DPRK, will pay an official friendly visit to Vietnam at the invitation of General Secretary of the Communist Party of Vietnam Central Committee and State President Nguyen Phu Trong.

US President Donald Trump announced on Feb 8 that his second meeting with Kim would take place in the Vietnamese capital, Hanoi, on Feb 27-28. His first meeting with Kim in June 2018 in Singapore resulted in improved US-DPRK relations.

So far, nearly 3,000 foreign reporters from more than 200 foreign media outlets in nearly 40 nations and regions have registered to cover the summit, Vietnamese Minister of Information and Communications Nguyen Manh Hung said at the press conference.

During the summit, Trump will also meet with Vietnamese senior leaders, Trung said.

Trump is scheduled to arrive at Noi Bai international airport on Tuesday, according to the ministry's Press and Information Department.

Trump's trip to Vietnam is not an official one, but he will have meetings with Vietnamese leaders to discuss important issues related to the bilateral relations between Vietnam and the US, Le Hoai Trung said during the press conference.