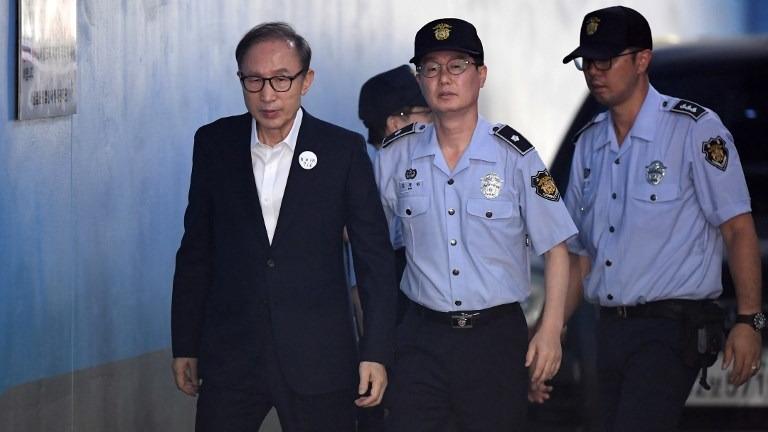 In this file photo taken on Sept 6, 2018, former South Korean president Lee Myung-bak (left) arrives at a court to attend his trial in Seoul. The Seoul Central District Court on Oct 5, 2018 sentenced Lee to 15 years in prison over a slew of corruption charges. (JUNG YEON-JE / AFP)

SEOUL - Former South Korean president Lee Myung-bak was sentenced Friday to 15 years in jail over a set of corruption charges, including bribery and embezzlement.

The Seoul Central District Court sentenced Lee, who served as the country's head of state for five years from early 2008, to 15 years in prison and fined him 13 billion won (US$11.5 million).

The sentencing session was broadcast live though the 76-year-old refused to appear at the courtroom.

Prosecutors had demanded a 20-year imprisonment, with the fine of 15 billion won (US$13.3 million).

The ruling said Lee concealed his ownership of DAS, a lucrative auto parts maker, under the borrowed names from relatives and embezzled about 24.6 billion (US$21.8 million) from the South Korean company.

Lee was convicted of collecting 5.9 billion won (US$5.2 million) in bribes from Samsung Group, the country's biggest family-controlled conglomerate.

The bribe was offered to pay lawyer fees for the auto parts company, which faced a legal case in the United States, in return for Lee's presidential pardon to Samsung Electronics Chairman Lee Kun-hee.

The former president was found guilty of receiving millions in US dollars from former intelligence agency chief, a former lawmaker and a businessman.

Lee was taken to a prison in March as he has long been dogged by allegations of corruptions.

The court said Lee had long embezzled tens of millions in US dollars from DAS, which he owns under the borrowed names, noting that the wrongdoings, disclosed in the course of finding the company's effective owner, disappointed and gave distrust to the entire society and the people who supported Lee.

It noted that he denied all of his wrongdoings despite objective evidences and credible witnesses while shifting the blame on others implicating the corruptions.

Lee became yet another former South Korean president to be convicted of corruptions.

Former president Park Geun-hye, Lee's successor, was sentenced in August to 25 years in jail in the second trial, an extension of the 24-year imprisonment handed down in the first trial in April.

Park became the first South Korean leader to be impeached by the National Assembly in December 2016. She was officially removed from office in March the following year by the constitutional court over a corruption scandal.

The Seoul High Court sentenced Shin to two and a half years in jail with the suspension of execution for four years over his offer of kickback to the impeached Park.