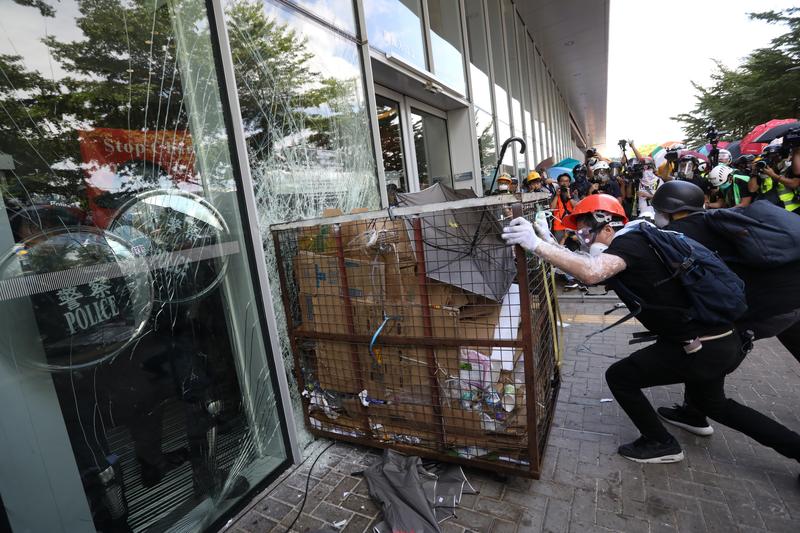 In this July 1, 2019 photo, protesters try ram a trolley laden with flattened cardboard boxes in an attempt to shatter the glass-fronted entrance to Hong Kong's Legislative Council complex in Admiralty. (PHOTO / CHINA DAILY)

HONG KONG - The Hong Kong Special Administrative Region's government, the city's Legislative Council (LegCo) president and lawmakers have strongly condemned the violence that some radical protesters resorted to when they tried to storm the LegCo complex on Monday afternoon.

A number of masked protestors were seen trying to shatter the glass-fronted entrace to the LegCo complex with iron poles and a metal cart laden with rubbish. Several glass doors took a battering and were seriously damaged.

In a press release issued at around 7 pm, a government spokesman said Hong Kong is a society that respects the rule of law, and has never tolerated violence. Protesters who resort to violence must stop their acts immediately.

The spokesman added the police will take appropriate enforcement action to protect public order and safety.

In a message relayed through his spokesperson earlier in the day, LegCo President Andrew Leung Kwan-yuen said he had sought police assistance to safeguard the complex. He iterated that demonstrators should express their opinions in a peaceful manner.

In a press release issued in the evening, 42 lawmakers from the pro-establishment camp jointly condemned the violent acts by extremely radical protesters.

They also thanked the police for their professionalism in maintaining public order and protecting the lives of Hong Kong residents.

Meeting the press amid the attempted storming of the LegCo, police too condemned violent behavior of the protesters, saying they had posed a serious threat to public safety and public order.

The LegCo has decided to cancel the meetings of the Joint Subcommittee on Issues Relating to the Regulation of Devices and Development of the Beauty Industry and LegCo Panel on Environmental Affairs scheduled at  2:30 pm and 4:30 pm Tuesday, respectively.

The government announced that owing to security reason, the Central Government Offices will be temporarily closed on Tuesday.

Staff working in the CGO should not go to the workplace and should work in accordance with the contingency plans of their respective bureaux or departments. All visits to the CGO will be postponed or canceled, according to a government press release issued at around 10 pm.