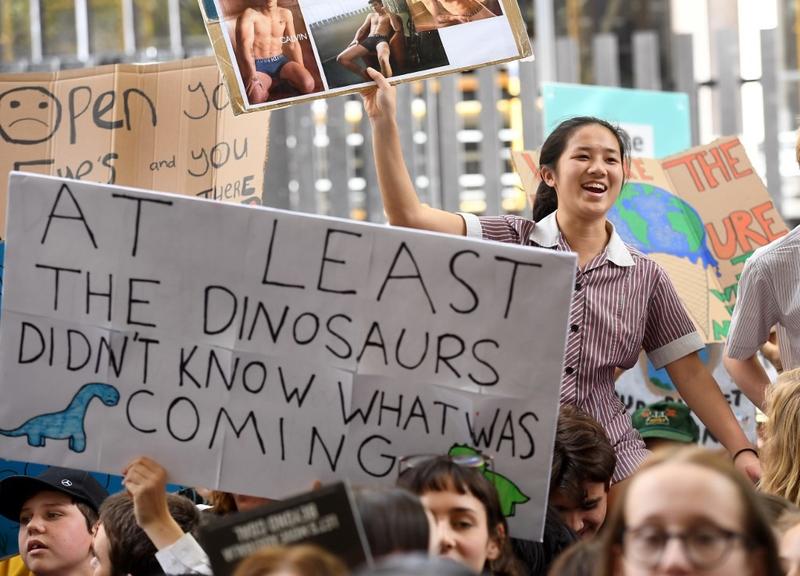 Schoolchildren hold up placards in a climate protest outside the ruling Liberal Party headquarters in Melbourne on May 3, 2019. (WILLIAM WEST / AFP)

MELBOURNE — A group of islanders off Australia's north coast filed a human rights complaint to the United Nations against the Australian government on Monday over inaction on climate change, which they say is threatening their homes, their lawyers said.

"We're currently seeing the effects of climate change on our islands daily, with rising seas, tidal surges, coastal erosion and inundation of our communities," said Kabay Tamu, one of the eight islanders bringing the case.

We're currently seeing the effects of climate change on our islands daily, with rising seas, tidal surges, coastal erosion and inundation of our communities

Kabay Tamu, one of the eight islanders bringing the case

Torres Strait Islanders are part of Australia's indigenous population, along with Aborigines, who live on small islands dotted between Australia and Papua New Guinea.

The Australian government is investing A$3 million in environmental management for the Torres Strait Islands and would invest a further A$3.5 billion to help cut Australia's carbon emissions if re-elected on May 18, Environment Minister Melissa Price’s spokesman said in emailed comments.

The claimants, backed by US environmental group 350.org, also launched a petition highlighting they want the Australian government to commit at least A$20 million (US$14 million) for measures such as seawalls to shield the islands from rising sea levels.

"Australia's continued failure to build infrastructure to protect the islands, and to take action to reduce greenhouse gas emissions, constitutes a clear violation of the islanders ‘rights to culture, family and life," Sophie Marjanac, the lead lawyer on the complaint, said in a statement.

The Torres Strait Islanders also want Australia to cut carbon emissions by at least 65 percent below 2005 levels by 2030, which would be far more ambitious than the targets set by the conservative government and the opposition Labor party.

At the same time the islanders want thermal coal to be phased out in domestic power generation and for export. Thermal coal is Australia's fourth-biggest resources export.

The complaint is the latest in a string of climate change cases worldwide targeting companies and governments, which lawyers expect will proliferate.

"I think that probably these types of actions will fail initially," said Andrew Korbel, a partner at law firm Corrs Chambers Westgarth.

"But over time the prospect of them succeeding is likely to increase, partly because the science linking climate change and specific climatic events to actions or failure to take action seems to be improving," he said.

The UN Human Rights Committee has previously raised concerns about Australia's record on issues such as its treatment of asylum seekers and indigenous people, but with little response.

The complaint comes just as United Nations Secretary-General António Guterresis on a Pacific tour focused on climate change, flagging that the world was "not on track" to limit global warming to 1.5 degrees Celsius.