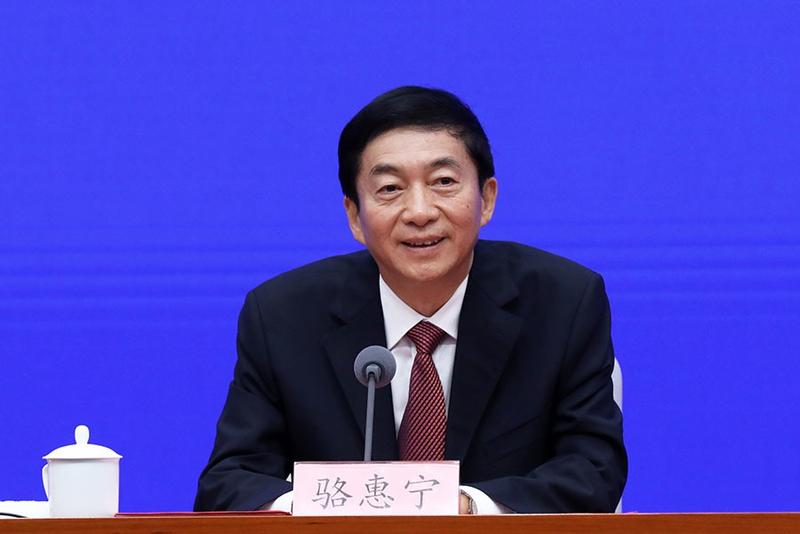 According to Xinhua News Agency, Wang has been relieved from the post of director of the Liaison Office of the Central People’s Government in the HKSAR. He has held the post since September 2017.

Luo is from Yiwu city, Zhejiang province. He was appointed governor of Qinghai province in 2010.

He has also served as secretary of the Qinghai and Shanxi provincial committees of the Communist Party of China.

On Dec 28, Luo was appointed vice-chairman of Financial and Economic Affairs Committee of the National People's Congress.

"Luo led a delegation to Hong Kong in his capacity as the Secretary of the CPC Shanxi Provincial Committee at the end of the year before last year. I had good exchanges with him on cooperation between Shanxi and Hong Kong and was impressed by his care for Hong Kong,” Lam said.

"I have no doubt that under the leadership of Luo, the liaison office will continue to work together with the HKSAR government to fully implement the Basic Law and ‘one country, two systems’ for Hong Kong's prosperity and stability, and promote the integration of Hong Kong into the overall development of the nation and the positive development of the relationship between the mainland and Hong Kong,” Lam said in the statement.

Lam also expressed gratitude to Wang for his contribution to Hong Kong.

“The HKSAR government and I are very grateful for the contribution by Wang Zhimin for upholding ‘one country, two systems’ and supporting the work of the HKSAR government in accordance with the law in the last two years or so. In particular during the unprecedented social unrest in Hong Kong in the past seven months, he led the liaison office in providing staunch support for the HKSAR government to curb violence and uphold the rule of law, giving us a lot of confidence and encouragement,” Lam said.

Lam, who has been collaborating with Wang on mainland-Hong Kong affairs since 2006, said she was deeply impressed by Wang’s love of Hong Kong, in particular his commitment in and support for work on youth development.