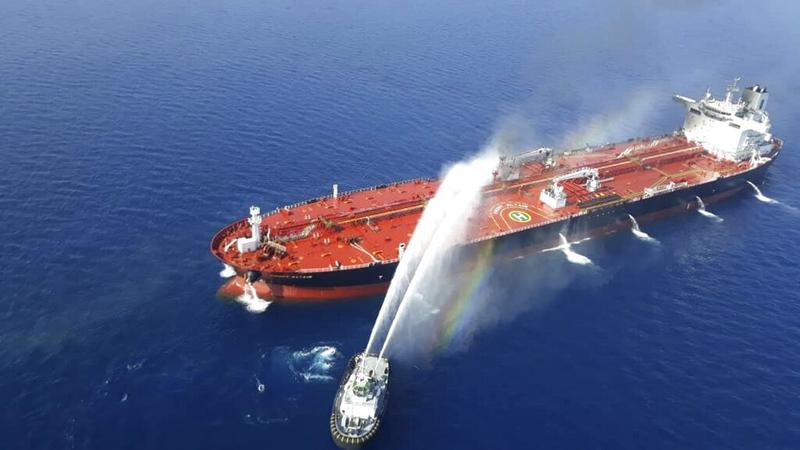 An Iranian navy boat sprays water to extinguish a fire on an oil tanker in the sea of Oman, June 13, 2019. Two oil tankers near the strategic Strait of Hormuz came under a suspected attack Thursday, setting one of them ablaze in the latest mysterious assault targeting vessels in a region crucial to global energy supplies amid heightened tension between Iran and the US. (PHOTO / AP)

All parties should work together to ease the Iran nuclear issue and tensions in the Gulf instead of letting the risk of conflict grow unchecked, State Councilor and Foreign Minister Wang Yi said in Beijing on Tuesday.

China calls for all parties to remain rational, practice self-restraint and avoid any moves that will further escalate tensions, Wang said

Wang made the remarks in a joint news conference with visiting Syrian Deputy Prime Minister and Foreign Minister Walid Muallem following their meeting.

Tensions in the Middle East rose after two oil tankers were attacked near the strategic Strait of Hormuz on Thursday.

The United States has said Iran was responsible for the attacks, and Iran has denied the accusation.

China calls for all parties to remain rational, practice self-restraint and avoid any moves that will further escalate tensions, Wang said.

"Don't open Pandora's box," he said. "Especially, the US should change its practice of maximum pressure. Unilateralism has no basis in international law. It will not help solve the issue, but will create a bigger crisis."

Wang suggested the political process in Syria should be accelerated to obtain a resolution that is in line with Syria's domestic circumstances and takes into account different parties' reasonable concerns.

Wang called for all parties involved to abandon perspectives based on geopolitical interests and to strengthen coordination in fighting terrorism in the region of Idlib, which has been a focus of conflict.

In addition, the international community should assist Syria in its reconstruction efforts, Wang added.

In his meeting with Muallem, Wang said new opportunities arose for China and Syria to develop bilateral relations as the momentum to resolve the Syrian issue politically is growing.

China will continue to firmly support Syria in maintaining sovereignty, independence and territorial integrity, as well as its efforts to combat terrorism and restore economic development, Wang said.

Muallem told Wang that Syria will firmly support China in safeguarding its sovereignty and territorial integrity, and that it hopes to join in the construction of the Belt and Road.

Syria welcomes China to take part in its reconstruction and looks forward to expanded investment by Chinese companies.