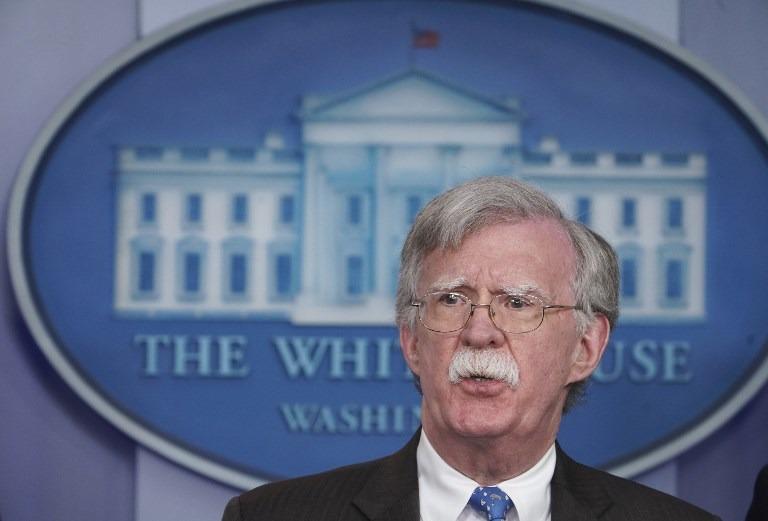 In this file photo taken on Jan 28, 2019 National Security Advisor John Bolton speaks during a briefing in the Brady Briefing Room of the White House in Washington, DC. (MANDEL NGAN / AFP)

WASHINGTON — US National Security Adviser John Bolton said on Sunday that the just-concluded meeting between the top leaders of the United States and Democratic People's Republic of Korea (DPRK) is not a "failed summit," adding US sanctions on the Asian nation would continue.

"I don't agree at all that it was a failed summit," he said during an interview with Fox News.

China hopes that the United States and the DPRK can remain determined and patient, meet each other halfway and stick to peace talks, to achieve new results and new progress

Yang Jiechi, member of the Political Bureau of the CPC Central Committee

He also made a similar statement in a separate interview with the CBC's "Face the Nation," saying that "I don't consider the summit a failure. I consider it a success defined as the president protecting and advancing American national interests."

"There was extensive preparation for this meeting. Extensive discussions between the president and Kim Jong-un," he explained. "So the president held firm to his view. He deepened his relationship with Kim Jong-un. I don't view it as a failure at all when American national interests are protected."

Saying that the DPRK has offered "a very limited concession" involving the Yongbyon complex in exchange of US "substantial relief from the sanctions," Bolton said that President Donald Trump thinks "he gave nothing away" in talks with the DPRK leader.

"That's - that's what matters, not my view," Bolton noted. "Unless you're prepared to say that it would be better to accept a bad deal than to walk away from no deal, to me that's a success."

He added that Trump is "fully prepared to keep talking" with the DPRK side.

"What President Trump was trying to do was look at what was possible for them overall," he said. "He remains optimistic this is possible. Kim Jong-un himself said in our last meeting, you know, we're going to go through many stations before we achieve this deal. The meeting in Hanoi was one such station. So the president is ready to keep talking."

However, he added that Washington's "program of maximum pressure will continue" on Pyongyang, which had "brought them to the table in the first place."

"We'll see what happens next," he added.

Trump and Kim ended their second summit in Hanoi last week without reaching an agreement. However, both sides have expressed willingness after the meeting for further engagement on key issues that have haunted the Peninsula and both sides for decades, such as the denuclearization of the Korean Peninsula, the establishment of lasting peace, and economic options related to the DPRK side.

In response to the US accusation that the DPRK had asked too much in terms of sanction lifting in the meeting, Ri Yong Ho, DPRK's foreign minister, said on March 1 that his nation had only proposed that the United States partially remove its sanctions impeding the livelihood of the DPRK people.

If the United States agrees to the proposal, the DPRK "will permanently and completely dismantle all the nuclear production facilities in Yongbyon area, including plutonium and uranium in the presence of US experts and by the joint work of technicians of both countries," Ri said. "This proposal was the biggest denuclearization measures we can take at the present stage in relation to the current level of confidence between the US and DPRK."

"However, during the meeting, the United States insisted we should take one more step besides the dismantlement of nuclear facilities in Yongbyon area. Therefore, it's crystal clear that the United States was not ready to accept our proposal," he said.

ROK's Blue House said that it seemed clear that Trump and Kim have made "more meaningful progress" than ever as they expanded the scope and depth of their understanding of each other's positions through the summit in Vietnam.

Also on March 1, Yang Jiechi, a member of the Political Bureau of the Communist Party of China (CPC) Central Committee, held a telephone conversation with US Secretary of State Mike Pompeo, saying that the Korean Peninsula-related issues are complex and cannot be resolved in one stroke.

China hopes that the United States and the DPRK can remain determined and patient, meet each other halfway and stick to peace talks, to achieve new results and new progress, said Yang, adding that China is willing to continue to play a constructive role on matters related to the Peninsula.

The US Pentagon said on Saturday that the United States and South Korea have decided to conclude the Key Resolve and Foal Eagle series of exercises, which the DPRK had denounced a dress rehearsal for northward invasion, and "very expensive" and "provocative" "war games" in Trump's view.