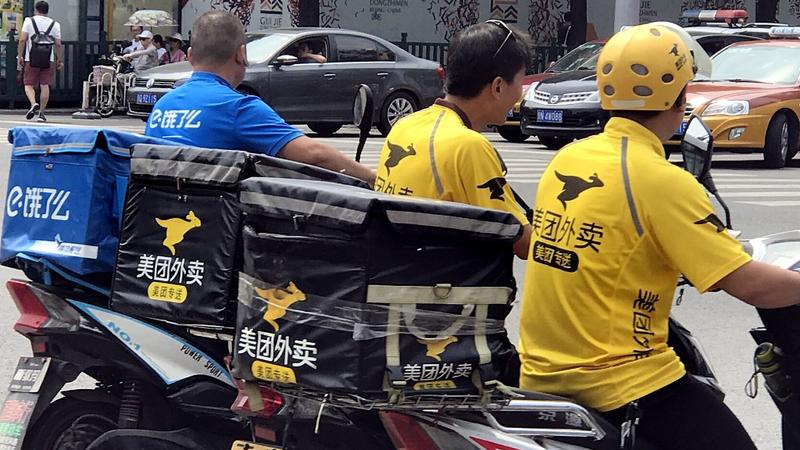 "Ten bubbles for bubble milk tea," "no skewers for grilled lamb," and "leave out the pepper for spicy dishes"...

Now in the third week since Shanghai's domestic waste management regulation implementation began, residents in the metropolis have developed a variety of new dining habits for online order-in food to reduce the hassle of trash sorting.

Eleme, the Alibaba-backed food delivery platform, reported receiving more than 4,100 orders from Shanghai with memos related to trash sorting since July 1, when the regulation came into effect.

Eleme, the Alibaba-backed food delivery platform, reported receiving more than 4,100 orders from Shanghai with memos related to trash sorting since July 1, when the regulation came into effect

About one-quarter of the orders asks for "less soup" for their order-in food, making up the largest share of that kind of request on the memo. Other customers noted their orders with "less rice", "fewer peppers" in spicy dishes, or "no skewers" for grilled meat.

All explained in the memo that it's about making trash sorting easier, according to receipts shared by the platform.

Meituan, another leading food delivery company in China, said the number of orders specifying "no utensils" during the first week of July has increased fourfold in Shanghai, compared with a month ago.

To discard a cup of unfinished bubble milk tea, for example, one needs to dump the milk tea in the sink, put the bubbles in kitchen waste and the cup into residual waste, or recyclables depending on what the cup is made from.

Straws - both plastic and paper ones - and disposable utensils have seen the most significant drop in demand, according to the two food delivery platforms and catering chains like Starbucks and Haidilao Hot Pot.

In a recent online survey initiated by Caijing.com, more than half of the 50,000 or so respondents said they would stop drinking bubble tea because of the complicated trash sorting procedure.

Those who ticked the box of "never giving up on bubble tea regardless of any difficulties" accounted for only 11 percent of the total.

On the other hand, the waste processing capacity at a treatment facility in Shanghai has greatly improved since July 1, thanks to the "higher quality" of waste received, according to Xinmin Evening News.

The Tianma domestic waste recycling and processing center takes in an average of 2,000 metric tons of waste every day. By taking advantage of the energy from the burning waste, it can generate 960,000 kilowatt-hours of electricity, sufficient for 160,000 households to use for one day.

Management of the center told the paper that as the waste is becoming "dryer", a result of less kitchen waste, more power can be produced.