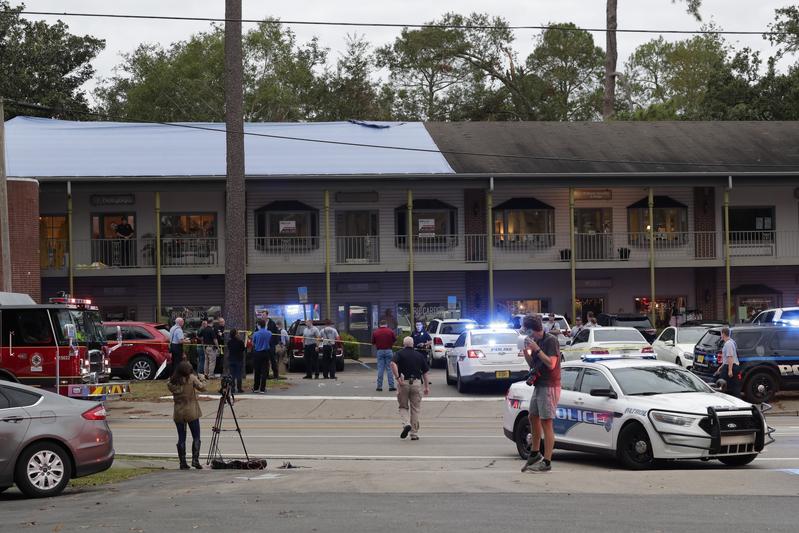 Police investigators work the scene of a shooting, Nov 2, 2018, in Tallahassee, Florida after a shooter opened fire at a yoga studio in Florida's capital before killing himself. (TORI SCHNEIDER/TALLAHASSEE DEMOCRAT VIA AP)

TALLAHASSEE, Florida — A gunman killed two people and wounded five others at a yoga studio in Florida's capital before killing himself Friday evening, officials said.

Tallahassee Police Chief Michael DeLeo told reporters Friday night that the man shot six people and pistol-whipped another after walking into the studio, which is part of a small Tallahassee shopping center.

The suspect then fatally shot himself, DeLeo said.

The department identified the two people who were killed as Dr. Nancy Van Vessem, 61, and Maura Binkley, 21, the Democrat reported.

"As CHP's longtime chief medical director, Nancy has been a guiding, visionary force in our daily work to serve the wellness and health care needs of thousands of families in this community. Her dedication, caring, leadership, humanity, and experience made her one of the most respected, inspiring, and accomplished medical professionals in the state and country. Our hearts are filled with sorrow and prayers for her family. We all have been so blessed to have Nancy in our lives," the company said. 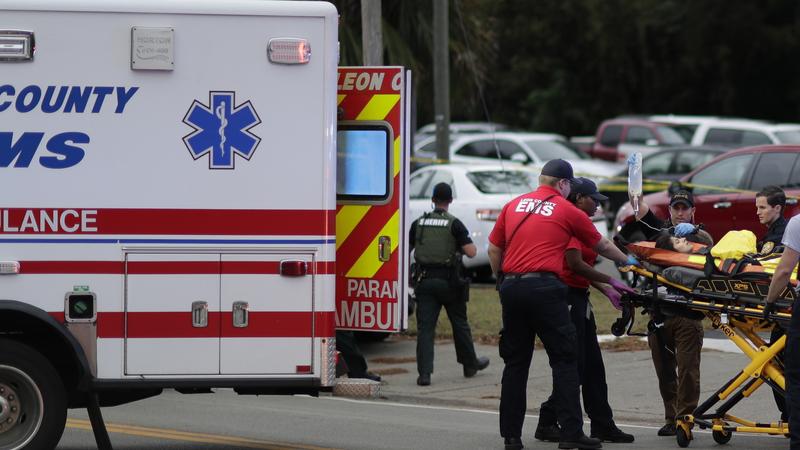 A person is transported from scene of a shooting, Nov 2, 2018, in Tallahassee, Florida after a gun man opened fire at a yoga studio in Florida's capital before killing himself Friday. (TORI SCHNEIDER/TALLAHASSEE DEMOCRAT VIA AP)

"To lose one of our students and one of our faculty members in this tragic and violent way is just devastating to the Florida State University family. We feel this loss profoundly and we send our deepest sympathies to Maura's and Nancy's loved ones while we pray for the recovery of those who were injured," Thrasher said in a statement.

DeLeo said police are asking for anyone who saw something unusual around the time of the shooting to contact police. He said the shooter acted alone and authorities are investigating possible motives. He declined to say what kind of gun the shooter had.

"We're all very saddened and shocked by the events that occurred, but it's important that people understand that there is no immediate threat outside of what has already occurred this evening," DeLeo said.

Melissa Hutchinson said she helped treat a "profusely" bleeding man who rushed into a bar after the incident. She said three people from the studio ran in, and they were told there was an active shooter. 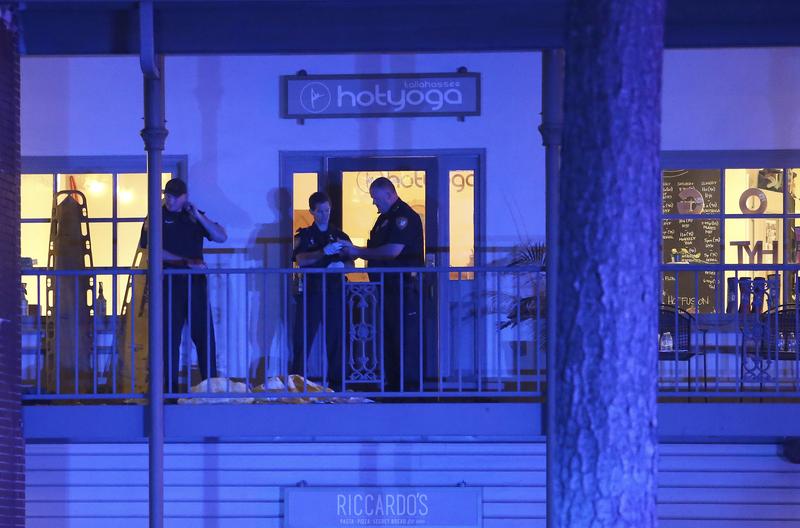 "It was a shocking moment something happened like this," Hutchinson said.

The people who came in were injured, including the bleeding man who was pistol-whipped while trying to stop the shooter. They told her the shooter kept coming in and out of the studio. When he loaded his gun, people started pounding the windows of the studio to warn people.

City Commissioner Scott Maddox was on the scene. He said on Facebook, "In my public service career I have had to be on some bad scenes. This is the worst. Please pray."

Elle Welling said she was leaving a liquor store across the street from the shopping center and saw at least three people loaded into ambulances.

"You don't think about this in Tallahassee and now you have to," said Welling, 26, who lives in the neighborhood.

The plaza is home to popular restaurants, a jewelry store, a framing shop, a hair salon and other businesses.

Erskin Wesson, 64, said he was eating dinner with his family at a restaurant located below the yoga studio when they heard the gunshots above them.

"We just heard 'pow, pow, pow, pow,'" Wesson said. "It sounded like a limb falling on a tin roof and rolling."

The restaurant's owner came by a short time later, asking if anyone was a doctor, Wesson said. His step-daughter is an emergency room nurse and helped paramedics for about an hour, he said.

Tallahassee Mayor Andrew Gillum, who is the Democratic nominee for governor, broke off the campaign trail to return to Tallahassee. He earlier appeared at a campaign event with former President Barack Obama.

Late Friday night, Gillum spoke to reporters near the scene of the shooting to say that he had visited in the hospital two people who were shot at the yoga studio. The mayor said they were in good spirits despite their injuries.

Gillum asked residents to pray for those who survived and those who were killed in the shooting.

"We all feel a sense of added vulnerability" because of the shooting, the mayor said.

Republican Gov. Rick Scott, who is challenging Democratic Sen. Bill Nelson, called DeLeo and the head of the Florida Department of Law Enforcement to get details of the shooting.

"I will remain in constant communication with law enforcement. We have offered state assistance," Scott tweeted.

Tallahassee's crime and murder rate has been an issue in the governor's race, with Gillum's opponent, Republican former US Rep. Ron DeSantis, calling the capital Florida's most crime-ridden city, a claim that is incorrect.