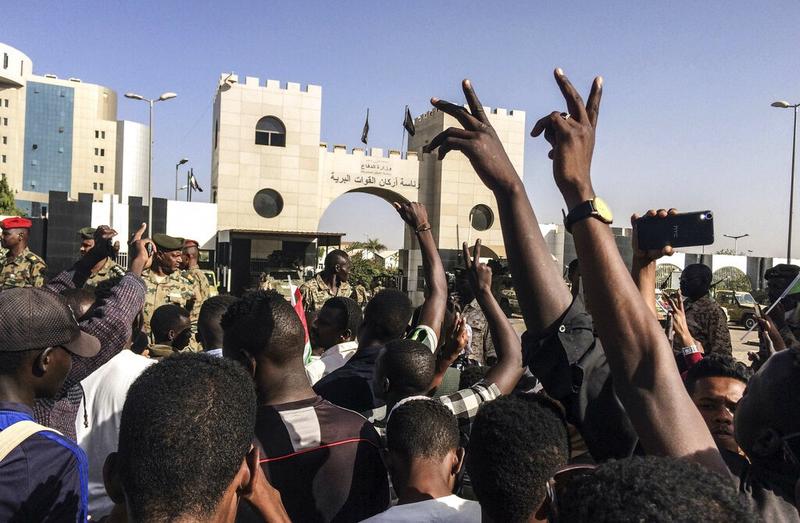 Sudanese demonstrators march with national flags as they gather during a rally demanding a civilian body to lead the transition to democracy, outside the army headquarters in the Sudanese capital Khartoum, April 13, 2019. (AP)

CAIRO/ KHARTOUM - Sudan's military council on Monday said it was restructuring the military command council as protesters moved to protect a sit-in in Khartoum.

Sudanese protesters moved to block an attempt on Monday to break up a sit-in outside the Defence Ministry, where demonstrators have been pushing for a quick transition to civilian rule after President Omar al-Bashir was ousted, a Reuters witness said.

Troops had gathered on three sides of the sit-in and tractors were preparing to remove stone and metal barricades, but protesters joined hands and formed rings around the sit-in area to prevent them.

The protesters, numbering about 5,000 with more arriving, chanted "Freedom, freedom" and "Revolution, revolution", and appealed to the army to protect them.

Earlier, Sudan's main protest group, the Sudanese Professionals Association (SPA), issued an urgent call for people to join the sit-in and foil any attempt to disperse it.

"We hope that everyone will head immediately to the areas of the sit-in to protect your revolution and your accomplishments," the SPA said.

The sit-in outside the compound, which also includes the intelligence headquarters and the presidential residence, began on April 6, after more than three months of protests triggered by a deepening economic crisis.

On Thursday, Sudan's army announced that it had removed and detained Bashir after three decades in power and was setting up a transitional military council to run the country.

Since then the head of the military council and of Sudan's powerful intelligence services have both been replaced, as protesters have continued to call for change.

The SPA has demanded the immediate handover of power to a civilian transitional government as well as the prosecution of former officials.