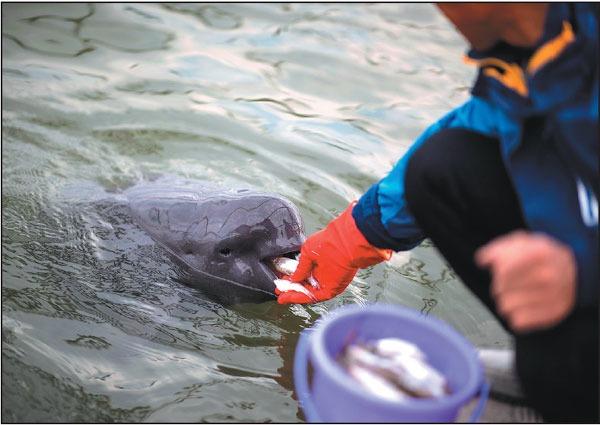 A river worker feeds a finless porpoise in the Yangtze River in Shishou, Hubei province. (PHOTO PROVIDED TO CHINA DAILY)

Yangtze River environment protection has been a hot topic among the country's political advisers, who have gathered in Beijing for the annual two sessions.

A program - released by the ministries of agriculture and rural affairs, finance, and human resources and social security in January - aims to provide subsidies, social security and skills training to help fishermen affected by the ban change jobs smoothly

Pan, also a member of the National Committee of the Chinese People's Political Consultative Conference, made the remarks on the sidelines of the ongoing session of the CPPCC which opened in Beijing on Sunday.

Fisherman Zhang Chuanxiong has played a role in those efforts. He became a fisherman in the early 1970s, working the stretch of the Yangtze River that runs through Hukou county in Jiangxi province. However, in 2017, he became a river guard, tasked with protecting the Yangtze porpoise.

"I was born into a fisherman's family, and spent more than half my life fishing; now I am paying back my debt to the river," the 65-year-old said, adding that many of his peers have joined him on the river guard team, cruising the waterway to help the local government eradicate illegal fishing.

Next year, though, all the fisherfolk on the Yangtze will have to put away their nets when a 10-year ban on fishing along the river and its major tributaries comes into force.

A program - released by the ministries of agriculture and rural affairs, finance, and human resources and social security in January - aims to provide subsidies, social security and skills training to help fishermen affected by the ban change jobs smoothly.

It is just one of many government measures to protect the ecosystem and cleanse the waters of China's "mother river" being introduced across the country.

Stretching more than 6,000 kilometers, the Yangtze feeds millions of people as it flows through 11 provinces and municipalities. Hailed as a major economic engine, the Yangtze River Economic Belt accounts for over 40 percent of the national population and GDP, according to the National Bureau of Statistics.

The river is essential for the people and the country, but excessive exploitation and pollution have depleted the river's aquatic resources and damaged the aquatic environment.

In recent years, the river's annual fish yield has been less than 100,000 metric tons, just 0.15 percent of the country's total, according to the Ministry of Agriculture and Rural Affairs, triggering a vicious cycle where fishermen use larger, denser nets but catch fewer, smaller fish.

The Yangtze River has been "seriously ill", said President Xi Jinping, when he addressed a symposium last year in Wuhan, Hubei province, through which the river's middle reaches flow.

Xi said that environmental protection and restoration will become a dominant focus, and authorities should "work together for major protection, instead of carrying out major development" along the river.

The 10-year fishing ban is a response to a guideline on the protection of the Yangtze's aquatic life that was issued by the State Council, China's Cabinet, in October.

When she learned about the ban, Cheng Lin, a senior program officer with the World Wildlife Fund, was in Los Angeles attending a conference on the conservation of biodiversity.

She was so excited that she shared the news with foreign experts at the conference. "I told them that today's China not only cares about economic growth, but also about the ecosystem and the environment," she said.

Cheng, who has been studying the Yangtze's aquatic ecology for the past seven years, has long been a firm advocate of the fishing ban and helping fishermen transition to new jobs.

"An existing ban, which covers parts of the river for four months a year, has been unable to stop the fish population from dwindling," she said, adding that investment in employment training for the fishermen and education for their children are the keys to restoring the river's aquatic life.

While Cheng's focus is firmly on the fish population, ornithologist Zhou Haiyan is concerned about the birds that migrate to the Yangtze River Valley every winter.

The Siberian white crane, listed as "critically endangered" by the International Union for Conservation of Nature, is the species she cares about most.

About 3,600 of the birds, accounting for 98 percent of the global population, fly from Russia to spend the winter in the river basin, especially in the wetland around Poyang Lake, a major body of water connected to the Yangtze.

Although more than 1,000 visited in 2017, she has seen very few cranes landing in her lotus field this winter.

She and a number of volunteers rented the 200,000-square-meter field, which borders the southern part of Poyang Lake near Nanchang, Jiangxi province, from a farmer, and adapted it to make a suitable conservation area for the cranes.

"The cranes hovered, but did not land this year," Zhou said, drawing attention to the noise and smog in the surrounding area, where a parking lot was under construction and farmers were using large machines to harvest crops.

Zhou had no funds to compensate the farmers for not harvesting their crops during the cranes' migration season, and she has no legal right to stop the construction. However, the situation may be different next winter because in January, Jiangxi extended its environmental compensation plan to cover more farmers with land around the lake.

She hopes to have the lotus field designated as a small conservation area, so no construction will be allowed in the immediate proximity.

Also in January, a country-level action plan for the protection and restoration of the Yangtze released by the Ministry of Ecology and Environment and the National Development and Reform Commission promised greater financial support for environmental compensation.

The plan pledges to strengthen the reward-and-punishment mechanism, linking government funding with effective environmental management in provinces and municipalities along the Yangtze.

On Wednesday, the ministry held a video conference with local officials to launch eight campaigns, including inspections of sewage outlets, measures to outlaw the dumping of solid waste in the river, the restoration of water classified below Grade V (the lowest level of national water quality) and the launch of satellite remote sensing to detect illegal development in nature reserves.

Lyu Zhongmei, deputy director of the social and legal committee of the Chinese People's Political Consultative Conference, said the country needs an over-arching law to coordinate protection along the Yangtze.

She noted that more than 30 regulations are related to water management along the river, in addition to about 76 tasks spread over 15 different ministerial bodies.

"The scattered nature of management does not help protection efforts, and also results in conflicting plans produced by different governmental bodies," said Lyu, who has been studying the feasibility of a law to protect the river since 1996.

During her time as a deputy to the National People's Congress from 2003 to 2017, she proposed river protection legislation three times. Finally, in September, the standing committee of the 13th NPC announced that the Yangtze River Protection Law had been listed in the first category for legislation, meaning a draft will be reviewed during NPC sessions until 2023.

"It is now urgent that legislators and legal scholars formulate a new legal design to deal with the many factors involved in protecting our mother river," she said.