Yuen Long residents struggle to get home amid new protest 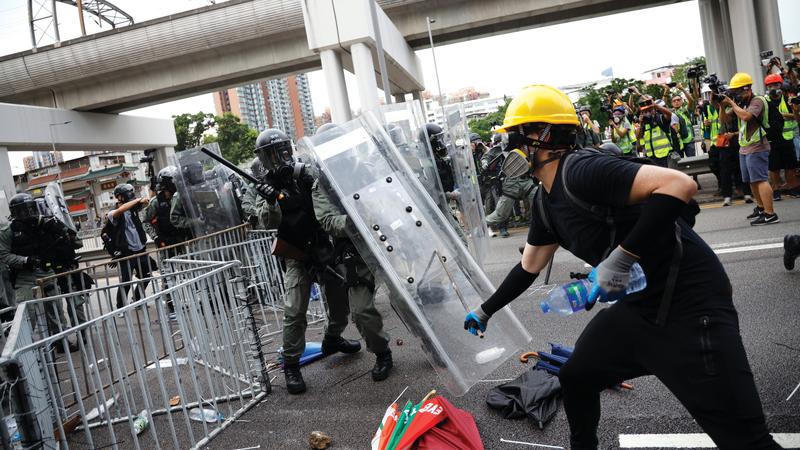 A protester attacks officers with an iron bar in a tense standoff with the police during the unauthorized rally in the New Territories district of Yuen Long on July 27. (CHINA DAILY)

Yuen Long residents had their trips home interrupted on Wednesday evening after chaos broke out again in and outside Yuen Long MTR station — paralyzing local traffic.

During the protest, two men were arrested for unlawful assembly outside the Yuen Long station, police announced on Thursday. The two were among over 1,000 protesters gathered near the station late on Wednesday night while a relatively peaceful rally took place inside.

The chaos has affected Yuen Long people’s daily lives... All shops along the street were closed, although most of them usually stay open until midnight. Train services at the Yuen Long station resumed on Thursday morning, but the damage can still be seen at the station

Both events were arranged to express protesters’ anger over a sudden attack on commuters at the station on July 21.

The protesters outside the station blocked roads with garbage cans, bus stop boards and barriers. They also aimed laser beams at police officers.

Police conducted a dispersal operation of the illegal assembly after their repeated warnings were ignored. The protesters then retreated into the station, where they confronted police.

MTR Corp — the city’s sole rail operator — expressed regret over the protesters’ illegal acts at the Yuen Long station. In a statement issued in the early hours of Thursday morning, it said the damage was unacceptable; the MTR Corp said it has filed a report with police in connection with the incident.

A resident surnamed Chen was on one of the last trains that stopped at Yuen Long station. The station was full of protesters around 10 pm.

The protesters put stickers on the gate machine to block the Octopus card readers so the commuters couldn’t use their cards to get out of the station, Chen said. He and other passengers left the station through a security exit when normal exits were blocked by protesters to resist police.

Another resident named Lilly Wang said she took the bus after hearing of the situation at Yuen Long station. But the bus was stopped near Long Ping station — 1.4 kilometers away from Yuen Long station — because the roads ahead were blocked. She spent another 20 minutes walking home.

All shops along the street were closed, although most of them usually stay open until midnight. Train services at the Yuen Long station resumed on Thursday morning, but the damage can still be seen at the station, Wang said.

Firefighting equipment such as fire hoses and fire extinguishers were discharged by the protesters. Newspaper boxes and trash cans were also pushed over. A broken elevator was suspended for repair. The graffiti on the walls were temporarily covered with whiteboards.

At least 45 people were injured when a mob in white shirts stormed the Yuen Long station on July 21. A total of 28 people have been arrested so far.

Among them, the two men charged with rioting for their alleged participation in the attack will appear at Fanling Magistrates’ Courts on Friday, police said.