JAKARTA — At least two people were injured and some churches and homes damaged after a powerful earthquake struck eastern Indonesia, although residents who had fled to high ground fearing a tsunami had started returning, the disaster agency said on Friday.

The quake in the Moluccas struck late on Thursday and had a magnitude of 7.1 with its epicentre in the sea 139 km northwest of the city of Ternate

The quake in the Moluccas struck late on Thursday and had a magnitude of 7.1 with its epicentre in the sea 139 km northwest of the city of Ternate, according to the US Geological Survey.

A tsunami alert was lifted after almost two hours, although there have been more than 90 aftershocks since the initial quake.

“The local disaster mitigation agency in Ternate has also said that the people who were staying away from beaches started returning to their homes this morning,” he said in a statement, adding that calm had returned to the city of Bitung on Sulawesi island and in the Halmahera district in the Moluccas.

The quake had earlier caused panic among many residents, prompting them to flee to higher ground. 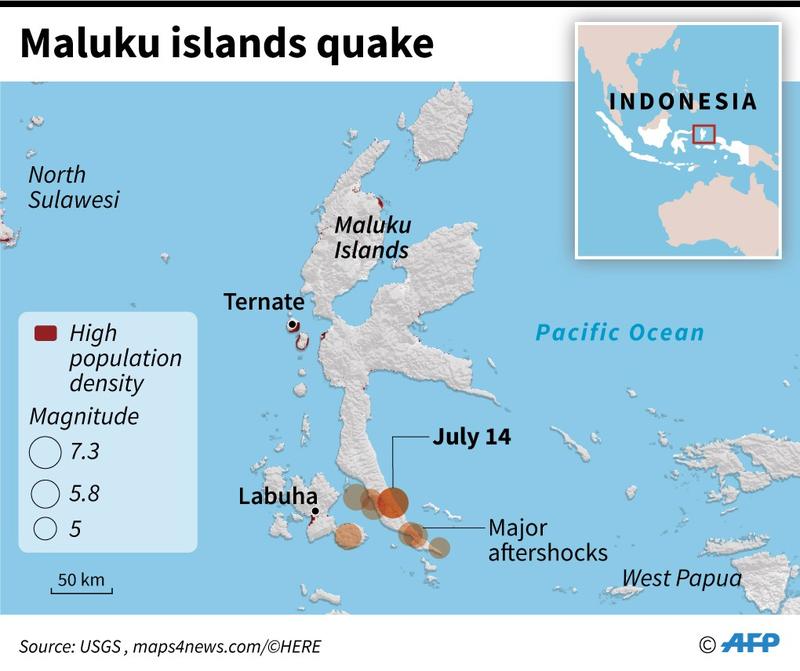 Map of Indonesia's Maluku islands, which was hit by a 7.3-magnitude quake and aftershocks in July, 2019. ( MAP / AFP)

Indonesia is situated on the so-called Pacific Ring of Fire, which frequently has earthquakes and sometimes accompanying tsunamis.

A magnitude 7.3 earthquake had struck the Moluccas in July, killing at least four people. The most devastating earthquake in recent Indonesian history was on Dec 26, 2004 when a magnitude 9.5 quake triggered a massive tsunami that killed around 226,000 people along the shorelines of the Indian Ocean, including more than 126,000 in Indonesia.