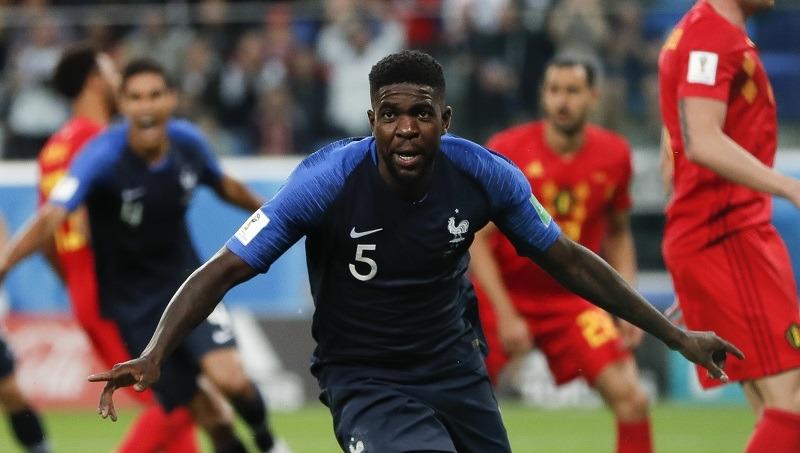 France's Samuel Umtiti celebrates after scoring his sides 1st goal of the game during the semifinal match between France and Belgium at the 2018 soccer World Cup in the St. Petersburg Stadium in, St. Petersburg, Russia, July 10, 2018. (NATACHA PISARENKO / AP PHOTO)

ST. PETERSBURG, Russia - They're young, they're brash and they're collectively worth a billion dollars. The one thing missing for this French squad is an international title.

Kylian Mbappe, Paul Pogba and France are about to get that chance.

Les Bleus are headed to the World Cup final.

Samuel Umtiti clinched a 1-0 win over Belgium - and earned the approval of watching French President Emmanuel Macron in the VIP seats at St. Petersburg Stadium - by scoring on a header off a corner kick in the 51st minute on Tuesday.

Umtiti played his part in a strong defensive effort by the French, too, helping to shut out the highest-scoring team at the tournament and leaving Belgium's golden generation of Eden Hazard, Kevin De Bruyne and Romelu Lukaku to regret another missed opportunity at a major tournament.

"It's me that scored," Umtiti said, "but we all delivered a big game."

France's players danced on the field after the final whistle and their fans sang in the stands long past the end of the match, surrounded by yellow-clad security.

They certainly hope to keep the party going on Sunday in the final in Moscow. France - with an average age of 26 - will face either Croatia or England, who play Wednesday at the Luzhniki Stadium in the Russian capital, and has a shot at redemption after losing its last two major finals - at the 2006 World Cup when Zinedine Zidane was sent off for a nasty head-butt and the 2016 European Championship on home soil. 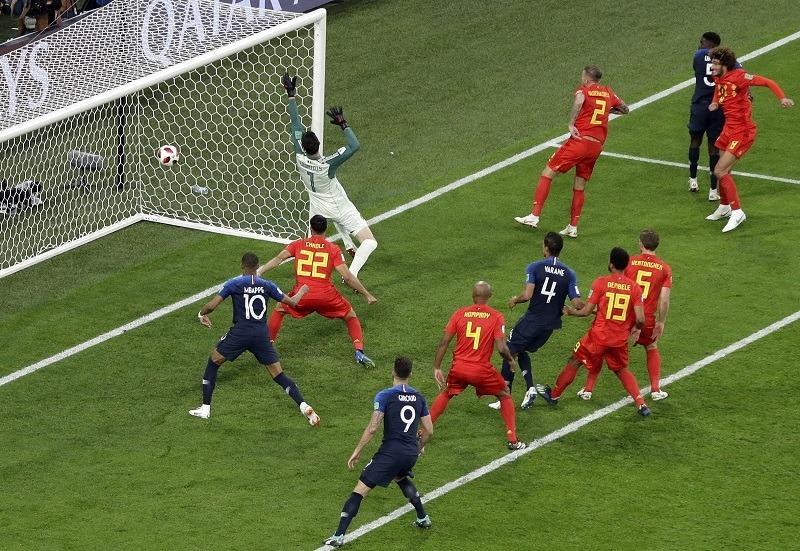 "We're immensely privileged to be in the World Cup final," France coach Didier Deschamps said. "It was so painful two years ago we have to savor it."

Deschamps now has the chance to become the third person to win the World Cup as a player and a coach, after German great Franz Beckenbauer and Brazil's Mario Zagallo. As France captain, Deschamps raised soccer's most prized trophy in 1998.

Deschamps has faced some criticism for being too pragmatic and functional despite having a squad of superstars, but his team was set up superbly against an opponent that was largely restricted to only minor chances and denied on two occasions in particular by France goalkeeper Hugo Lloris.

He dived to his right midway through the first half to claw away Toby Alderweireld's shot, then got in front of Lukaku to punch away one of the many crosses sent in by Belgium in the final stages.

In a tournament dominated by goals from set pieces, France's goal came off a corner when Griezmann curled in the ball from the right and Umtiti got in front of tall Belgium midfielder Marouane Fellaini to knock in his header at the near post.

Up in the corporate seats, president Macron reacted to the goal by shaking the hand of King Philippe of Belgium as FIFA president Gianni Infantino watched on between them.

"Unfortunately for us, the difference is just a dead-ball situation, a set play," Belgium coach Roberto Martinez said. "The game was, as you can imagine, very close, very tight, and it was going to be decided (on) maybe the one that could find that final touch in the box." 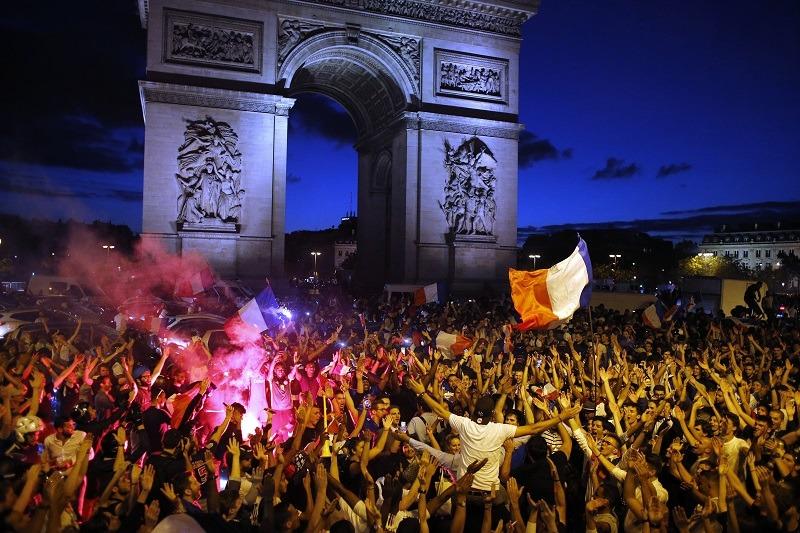 People celebrate on the Champs Elysees avenue, with the Arc de Triomphe in background, after the semifinal match between France and Belgium at the 2018 soccer World Cup, July 10, 2018 in Paris. (THIBAULT CAMUS / AP PHOTO)

After reaching the quarterfinals at both the 2014 World Cup and the European Championship in 2016, Belgium again missed the chance to get to an international final and has yet to fulfil its lofty expectations. Leading the scoring in this tournament with 14 goals, many thought this could be their year.

With Lionel Messi, Cristiano Ronaldo and Neymar no longer in Russia, Hazard and Mbappe have taken over as the stars of the World Cup and there was a buzz every time either got the ball.

Yet while Hazard - Belgium's captain - faded after a strong opening 30 minutes, Mbappe was a constant threat. His first touch was after 10 seconds and, after receiving the ball on the right wing, he sped past Jan Vertonghen and then Mousa Dembele on a thrilling run.

At 19, Mbappe wasn't even born when France won the World Cup for the first and only time with a squad that is just as diverse as the one Deschamps is leading 20 years later.

Umtiti was born in Cameroon. Mbappe has Algerian-Cameroonian roots.

"It's a pure pleasure to see these players grow," Deschamps said, "and never give up."

Instead of a trip to Moscow, Belgium will return to St. Petersburg on Saturday for the third-place match no team wants to play.

Along with the French and Gabonese presidents and the king and queen of Belgium, there was rock 'n' roll royalty watching the game.

Mick Jagger was one of the many famous faces in the stands at St. Petersburg Stadium. The Rolling Stones frontman is a big soccer fan, having attended the World Cup final in Brazil in 2014 as well as many England games.