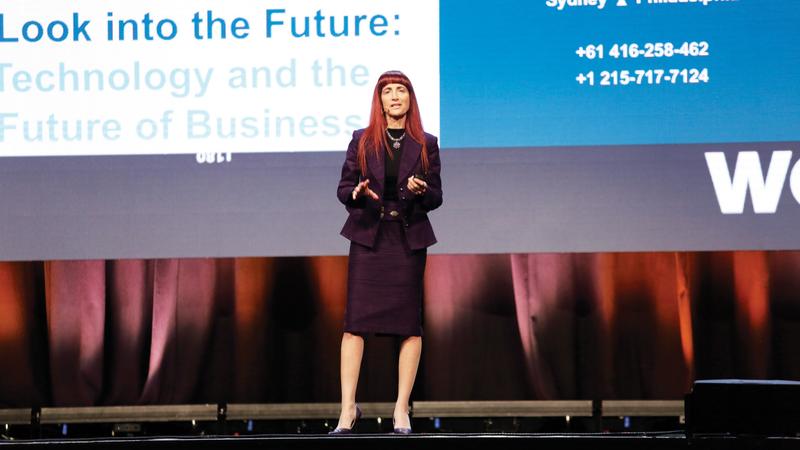 Shara Evans does not dwell on the present. She thinks about the future and the endless possibilities it brings.

Flying cars; robots that think like us; hyperloops linking cities and countries in a fraction of the time it takes traditional transport; and colonies on Mars.

These are just some of the things that may become a reality in just a few short years from now, she said.

Technology is not only changing the way we live and work but it is also redefining who we are as people. But, are we ready for the technology revolution?

“No,” said Evans, one of the world’s leading futurists.

Speaking to China Daily Asia Weekly during the recent World Business Forum (WBF), held in Sydney from May 30 to 31, Evans said there is a “big disconnect between the acceleration of technology, which is exponential, and the people who deal with it and have to adapt to it”.

“Many of those involved in technology have no idea just how far things like artificial intelligence (AI) and robotics have advanced,” she said.

With technology moving forward, however, comes important questions about data ownership, privacy and how we adapt technology to our society.

Evans embraces technology and believes that some areas in the realms of science fiction just a few years ago have now become science fact.

In her address to some 2,000 delegates at this year’s WBF, she said businesses should start to “think outside the box”. “We are living in a time of massive technological change. And that change is moving faster and faster all the time.

“The question that faces all of us is how to harness all these changes in our companies and preserve the future of humanity.”

As founder and CEO of Market Clarity, a Sydney-based telecommunications analyst firm, Evans brings together an engineering background and an intuitive understanding of how society is likely to respond to new technologies.

Her job takes her into the boardrooms of corporations around the world.

“No one epitomizes ‘thinking out of the box’ better than Elon Musk,” she told her audience.

“I read an article by (Australian entrepreneur, investor and author) Jack Delosa in which Musk said he probably read too many comic books when he was a kid and how the superheroes were always out saving the world.

“So from an early age Musk set about researching the key ways that he might influence the future of humanity and came up with five things — internet, sustainable energy, space travel, artificial intelligence and genetic engineering,” she said.

“Musk questioned the last two and wondered whether they would benefit humanity or harm humanity or both. So, he decided to base his life’s work on the first three.”

Evans said some of the biggest advances in technology have been in the auto sector where manufacturers are developing autonomous vehicles and electric cars.

“Toyota has even developed a semi-autonomous vehicle that can detect when a driver is tired and takes over the driving,” Evans said. “Manufacturers are expected to start rolling them (autonomous vehicles) out in 2020-21 and most will be electric or hybrid.”

Evans noted that this will have a massive impact, sending a ripple effect through the economy.

“What happens to revenue collection, for example, when the internet of things has sensors broadcasting the speed limit, what color the traffic light is, and when you should stop and go?”

Governments make a lot of money from fining drivers for jumping red lights, speeding and making numerous other infringements on the road. With smart cars, bad driving may be a thing of the past.

Another piece of futuristic technology gaining traction is the hyperloop — a concept Elon Musk first outlined in 2012.

This is a transportation system that would propel people or cargo-filled pods over long distances through steel tubes at speeds of between 800 and 1,200 km per hour. Magnetic levitation and vacuum pumps would do away with friction and air resistance.

While this was Musk’s idea, he was too tied up with Tesla and SpaceX — so he ‘open sourced’ the idea.

Evans believes the first operational hyperloop will connect Dubai with Abu Dhabi. A trip that takes one and a half hours by car will be cut down to just 12 minutes.

She said Musk is now looking at taking the hyperloop underground to criss-cross cities.

“He has already been given permission to do experimental work in Washington DC and Baltimore with hyperloop, so this may become a reality,” Evans said.

Then there is space travel. “Just think about it. Mining the moon and opening our solar system to space exploration.

“Already a number of private companies are looking into establishing colonies on Mars.”

Evans said private companies are eyeing a manned mission to Mars by 2030.

“Another cool idea is using rockets for travel on Earth. New York to Shanghai in 32 minutes. Of course, it will take four times as long to get through airport or rocket security. But the possibility is there.

“This is ‘out of the box’ thinking,” Evans said. “Where the impossible looks possible.”

She reiterated that what was once seen as science fiction has now become reality.

“What about flying cars? Uber is already talking about flying taxis in Los Angeles and Fort Worth, Texas, by 2020,” she said.

“Amazon and NASA have been working on an air traffic control system for drones, while New Zealand may have a flying taxi service up and running in a few years.

“The New Zealand regulator and a private company have spent a year and a half looking into the regulatory framework,” Evans said.

AI is another key area. Computers and mobile devices can be programmed for speech and facial recognition, and can now talk back to us.

We have reached a point where we can have a conversation with our devices rather than with a human, Evans said.

“We can tell our smartphones to do things for us, but the question we should be asking is: Who owns that data, and do you trust the company collecting that data?

“These are important issues.”

Evans said facial recognition is becoming so advanced that it can now process 1.6 million faces in a third of a second.

“It’s not perfect but it is getting there,” she said. “We have implants which can detect problems in our body and brain. But all this poses questions about ethics and privacy.”

How smart will AI get? Evans is not game to put an upper limit on it.

“I would say AI is at the two-year level in a child’s development. So, it still has a long way to go. Others believe AI will gain human intelligence by 2040 or 2050.

“There is so much going on,” Evans said. “Experiments on mice to reverse aging. What if the scientists find that secret? Imagine living 400 or 800 years!

“Why stop at age? What about the way we look! Forget plastic surgery.”

Could this be a new species or the next level of humanity?