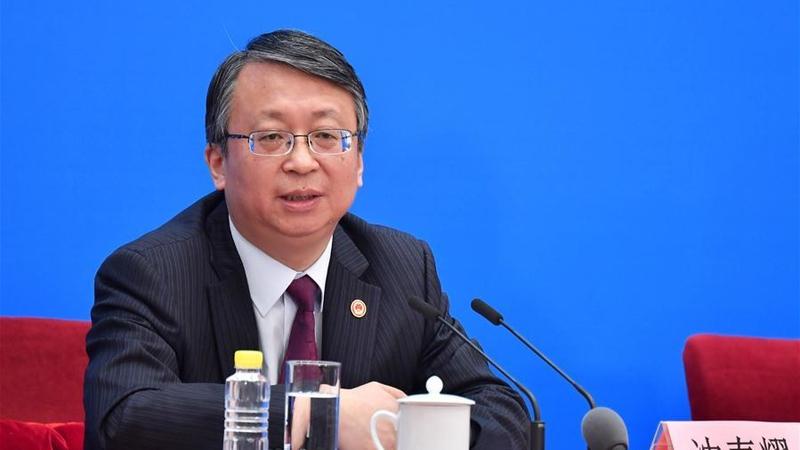 Shen Chunyao, director of the Legislative Affairs Commission of the NPC Standing Committee, answers questions at a press conference on an amendment to the country's Constitution in Beijing, capital of China, March 11, 2018. (LI XIN / XINHUA)

A key meeting of the central leadership has called for better legislation and enforcement mechanisms to safeguard national security in Hong Kong and Macao special administrative regions.

Governing Hong Kong and Macao based on the principle of "one country, two systems" is an important part of the country's comprehensive governance system, and its maintenance has been on the agenda at the just-concluded Fourth Plenary Session of the 19th Communist Party of China Central Committee, a senior legislator said on Friday.

"We must adhere to the principle that 'one country' is the premise and basis for the implementation of the 'two systems', and the 'two systems' is subordinated and derived from 'one country' and unified within it," said Shen Chunyao, director of the Legislative Affairs Commission of the Standing Committee of the National People's Congress, the country's top legislature.

"There's zero tolerance for any behaviors that challenge the bottom-line of the 'one country, two systems', or any actions that intend to divide the country or harm national security," said Shen, also director of the NPC Standing Committee's HKSAR Basic Law Committee and Macao SAR Basic Law Committee.

"We'll resolutely guard against and contain external forces' interference in Hong Kong and Macao affairs, and their secessionist, subversive or infiltrative activities," he said.

The session reviewed and adopted the CPC Central Committee's decision on some major issues concerning how to uphold and improve the system of socialism with Chinese characteristics and advance the modernization of China's system and capacity for governance.

A communique released after the session underscored that the country will uphold and improve the principle of "one country, two systems" and advance movements towards the peaceful reunification of China.

Shen said the decision, of which details have not yet been revealed, includes a section on how to adhere to, and improve, the "one country, two systems" mechanism.

According to Shen, some major requirements include: to uphold the constitutional order in the special administrative regions decided by the country's Constitution and basic laws of the HKSAR and Macao SAR; to improve the mechanism of appointing and removing chief executives and key officials of the SARs and intensify the NPC Standing Committee's explanation of the two basic laws; to set up and improve legislation and enforcement mechanisms in Hong Kong and Macao to safeguard national security and support the SARs to enhance their law enforcement capabilities; to better integrate the development of Hong Kong and Macao into the country's overall development; to support the two SARs to improve people's livelihood; to solve deep-rooted problems that may influence their social stability and future development.

The decision also underscores the significance of improving education for the people in Hong Kong and Macao, particularly civil servants and young people, about the country's Constitution, the basic laws and Chinese history and culture, to "improve their patriotism and sense of national identity," he said.