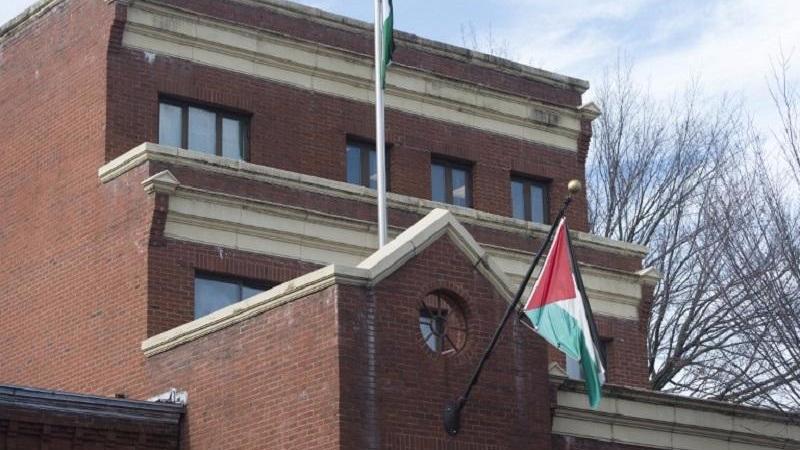 In this on Nov 21, 2017 photo, the Palestine Liberation Organization (PLO) Office is seen in Washington, DC. (SAUL LOEB / AFP)

WASHINGTON – The Trump administration's decision to close the Palestine Liberation Organization (PLO)'s office in Washington revealed Washington's siding with Israel, a stance that can further undermine the already derailed Middle East peace process, according to US experts.

In a statement released Monday noon, the US State Department announced the decision to shut down the mission, a new move to increase pressure on the Palestinians. The statement cited the Palestinians' lack of "steps to advance the start of direct and meaningful negotiations with Israel," and accusing the PLO leadership of refusing to engage in a US peace plan "they have not yet seen."

So it (the PLO) no longer views America as a neutral arbiter of Mideast peace talks. The American action is in retaliation against the PLO stance.

US experts on international relations see the Palestinians' rejection of US mediation as an outcome of distrust and disillusionment over the Trump administration's undisguised support for Israel.

The PLO believes these talks are completely one-sided and the US has tilted clearly in favor of Israel, Darrell West, a senior fellow at Brookings Institution, told Xinhua.

"So it (the PLO) no longer views America as a neutral arbiter of Mideast peace talks. The American action is in retaliation against the PLO stance," he added.

The Trump administration is "looking for ways to play hardball with the PLO," noted Dan Mahaffee, senior vice president and director of policy at the Center for the Study of the Presidency and Congress.

"But so much of the relationship between the US and the PLO is now clouded by the US decision to move the embassy to Jerusalem," the scholar told Xinhua.

The US recognized Jerusalem as Israel's capital in December last year, an unconventional step announced by Trump himself that sparked global outcry and inhibited the furious Palestinians from participating in talks mediated by Washington.

Earlier this year, the Trump administration launched a string of US funding cuts against the Palestinians to push them back to the negotiating table.

US media reported on Saturday that the Trump administration “will be redirecting” approximately US$25 million originally planned for the East Jerusalem Hospital Network. “Those funds will go to high-priority projects elsewhere."

In August, the US State Department announced a decision to "redirect" economic aid to the Palestinians worth more than US$200 million.

Later, it announced it would not provide assistance funding any more for the United Nations Relief and Works Agency for Palestine Refugees in the Near East (UNRWA).

The stalemate in talks and mission closure, along with the end of US support for West Bank development efforts, put pressure on the only negotiating partner that the US and Israel might find, as Hamas will hardly want to come to the negotiating table, noted Mahaffee.

For 40 years, it was "never seen any Administration simultaneously support Israel so uncritically and go after Palestinians so harshly both with logic, purpose or national security rationale," tweeted Aaron David Miller, a scholar from the Washington-based think tank Wilson Center.

"This isn't only about pressuring Palestinians; it's about changing US policy," added Miller, who also has worked on Arab-Israeli negotiations at the US State Department for more than two decades.