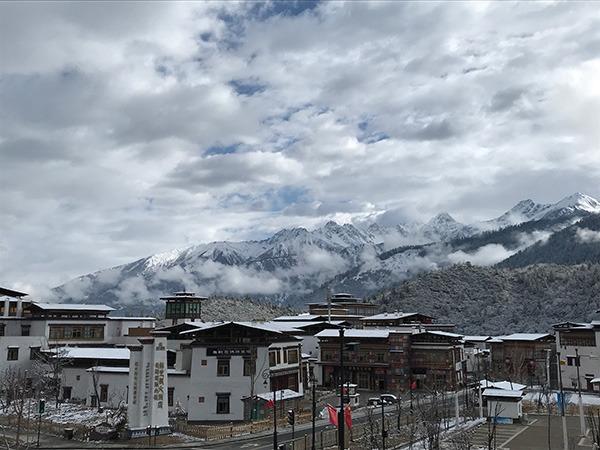 Lunang, which was transformed from a primitive pastoral village to an international tourism town,became the most popular destination within Nyingchi, according to its management committee. (PHOTO PROVIDED TO CHINA DAILY)

Lunang, which was transformed from a primitive pastoral village to an international tourism town, was a key poverty alleviation project that received an investment of about 3.8 billion yuan (US$566 million) from Guangdong province. It opened to the public in March 2017 and welcomed more than 1 million tourists last year. It became the most popular destination within Nyingchi, according to its management committee.

To help local people capitalize on the developing tourism industry, the committee organized regular training classes on how to provide better services and improve food quality

The tourism boom has brought local residents more business opportunities and benefits. Lhakpa Tsring, 41, moved into the town when construction was completed and opened a family hotel in July. Formerly, he ran a small restaurant nearby and earned an annual profit of about 200,000 yuan. Last year, his newly refurbished hotel brought in a profit of nearly 500,000 yuan.

Lhakpa Tsring has six siblings, five of whom are engaged in the same business. They all live a better life now with more tourists pouring into the town to take in its natural scenery.

To help local people capitalize on the developing tourism industry, the committee organized regular training classes on how to provide better services and improve food quality. Lhakpa Tsring, for example, had a chance to go to Lhasa, the regional capital, to learn cooking. The trip inspired him to innovate his menu after returning home.

"Summertime is usually the peak season when all the flowers are in full bloom, and my hotel is full every day," he said.

She said the rent for the land during the first three years was paid by an aid group from Guangdong. She is also exempted from paying water bills and receives a subsidy of 20,000 yuan from the committee during the off-peak season to help keep the restaurant running.

"Honestly, doing business in this place is very smooth thanks to the good policies," she said.

Wang settled in Lunang in 2000 and made a living with a small restaurant that could seat about 100 people. Because of the remote location and inconvenient transportation, Wang said she rarely received tourists in the beginning. Her guests were mainly truck drivers.

Lunang is an important part of Nyingchi's tourism industry. Since it was built, the project has created 1,000 jobs and improved the skills of local villagers, said Xie Binhui, deputy director of the committee.

"If the Potala Palace in Lhasa is the first-level landmark for tourism in Tibet, then we are committed to making Lunang international tourism town the second-most-visited destination by featuring ecotourism."