Defenders of the forests 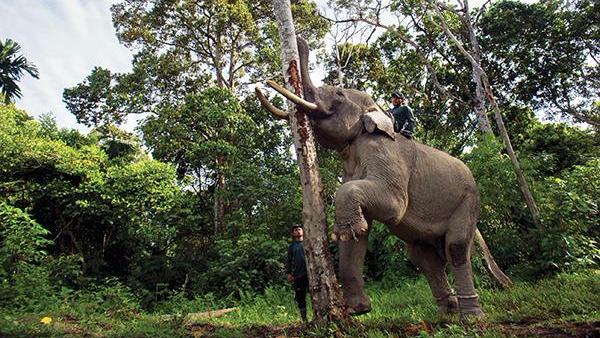 Indonesian mahouts train an elephant for patrol against illegal logging at the Leuser Ecosystem corridor in Sumatra on April 16, 2016.(AFP)

On the Indonesian island of Sumatra lies the ancient Leuser Ecosystem. At 2.6 million hectares, the UNESCO World Heritage site is a hotspot of biodiversity where elephants, rhinos, orangutans and tigers roam free.

But a wave of destructive industrial projects is posing a major threat to the future of the habitat, which is located in the provinces of Aceh and North Sumatra.

In March, a group of non-governmental organizations (NGOs) reached out to the UNESCO World Heritage Centre with an extensive report in a move to stop the construction of a geothermal power plant that could damage the ecosystem.

These NGOs include the Orangutan Information Center, the Sumatran Orangutan Conservation Program and the Forest, Nature and Environment of Aceh, known as HAkA.

The NGO report highlighted serious omissions and contradictions in the 2017 report submitted by Indonesia to UNESCO about the conservation of the Tropical Rainforest Heritage of Sumatra (TRHS) site — a large part of which lies within the Leuser Ecosystem.

The TRHS site has been on UNESCO’s List of World Heritage in Danger since 2011.

The Leuser Ecosystem is representative of the threats faced by natural heritage sites in Asia as a result of economic and demographic growth.

“We shouldn’t see nature as separate from us. The environment is what sustains us and we need to sustain nature for the good of humankind,” said Farwiza Farhan, chairperson of HAkA.

“Conservation is the antithesis of exploitation,” she said. “By saving the environment, whether they are UNESCO natural heritage sites or otherwise, we are stopping the exploitation of the natural world.”

However, throughout the region, not enough emphasis has been put on conservation.

A recent study published in the journal Biological Conservation found that as many as 91 percent of forested sites in Asia have suffered losses, including 20 sites that are damaged beyond repair.

Some of the worst affected are in Southeast Asia, including the Komodo National Park in Indonesia and Kinabalu Park in Malaysia. Both are UNESCO World Heritage sites.

Some governments are starting to recognize the importance of protecting such natural heritage sites, as well as their flora and fauna. Both Indonesia and Malaysia, for example, have made efforts to protect the rafflesia, the world’s largest flower.

But in few places in Asia is the destruction of rainforests as evident as in the Leuser Ecosystem.

Ian Singleton, director of the Sumatran Orangutan Conservation Program, pointed out that the Leuser Ecosystem is the “largest remaining contiguous rainforest ecosystem in the whole of Southeast Asia”.

“It’s also the last real hope for the survival of some of the world’s most iconic large mammal species, like the Sumatran tiger, elephant, rhino and orangutan, and many other rare and threatened species,” he said.

“Many like these are endemic to the region and found nowhere else on the planet.”

Hitay Panas Energi, a Turkish energy company, has been lobbying the Indonesian government to remove protections from a “core zone” of the Leuser Ecosystem to allow for the construction of a power plant.

The company had gained the support of the previous governor of Aceh province. However, the new governor-elect has stated he will cancel the Hitay project.

But Farhan of HAkA feels that the danger is far from over. “We are alarmed to know the company is still pushing to overrule this decision by Aceh’s incoming governor,” she said.

“Hitay is holding closed meetings with the Ministry of Environment and Forestry and its various departments in an attempt to manipulate Indonesia’s laws and enable the project to go ahead.”

Farhan said Hitay wants the space downgraded from a core zone to a utilization area.

“Having the UNESCO World Heritage site status is no guarantee that it will be safe from a downgrade,” she said.

“We will not sit by and watch as our forests are sold off to foreign-owned companies and (we) urge the Ministry of Environment and Forestry to reject any requests to destroy the legally protected Leuser Ecosystem.”

Hitay declined to offer any comment on the status of the project.

Feng Jing, chief of the Asia and Pacific unit at the UNESCO World Heritage Centre, has acknowledged the NGO report. “We have received and are considering the merits of the report. We will present it at the (annual) World Heritage Committee meeting in Poland this July,” he said.

The Hitay plan to build a power plant is not the only issue. A number of large hydroelectric dams have also been proposed in the area that could considerably undermine the integrity of the Leuser Ecosystem.

“They include several hydropower dams and geothermal energy plans being proposed in critical areas, a continuous lack of law enforcement throughout the region, and the devastating construction of new roads that carve up and fragment forests and wildlife populations, rendering them increasingly vulnerable to extinction.”

Mega power projects in and around the Leuser Ecosystem are not in the best interests of Aceh’s people either, he said.

“Not only do they lead to dependence on just a few large plants, they also devastate entire forested regions with all the roads and infrastructure they need, leading to more frequent and more intense environmental disasters — a problem from which the region already suffers disproportionately.”

“It’s ironic that such a precious and valuable ecosystem like Leuser, with all its biodiversity, could be obliterated in the name of renewable energy.”

Hadisiswoyo said that the current construction plans in Leuser mean that the threat has never been so severe for the last place on Earth “where so many endangered animals still live together in the wild”.

“We implore the World Heritage Committee to take urgent steps to prevent all these plans being implemented in Leuser,” he said.

“These projects would destroy critically important habitat areas of the Sumatran orangutan, which is listed by the International Union for Conservation of Nature as a critically endangered species on its Red List of Threatened Species.”

Singleton of the Sumatran Orangutan Conservation Program noted that the government’s move away from traditional nonrenewable sources and toward renewable energy is a step in the right direction.

However, “clearly not all renewable energy is sustainable if it means destroying a protected landscape and a UNESCO World Heritage site”, he added.