Game on for Chinese 5G firms 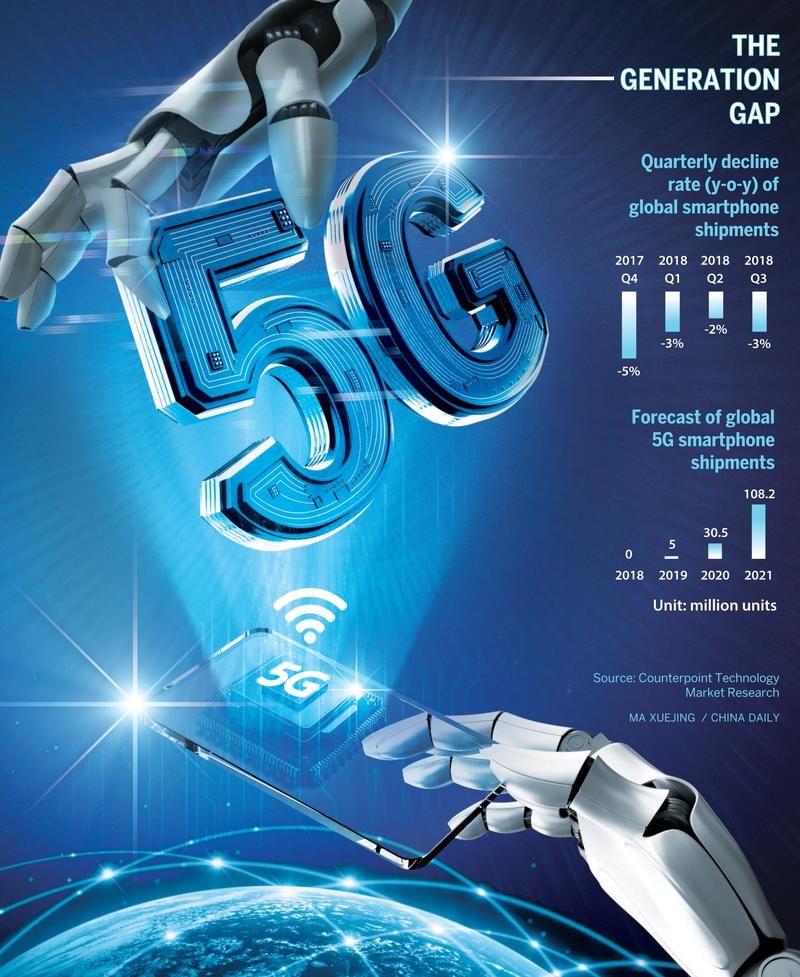 It's a high-stakes high-tech race.

Billions, maybe, trillions of dollars are up for grabs globally－and Chinese technology companies are vying to scoop up as much of the fifth-generation or 5G mobile telecommunication technology pie as possible, as the D-Day of commercial launch around 2020 nears.

In doing so, they are also seeking the honor of being remembered as the first off the block, in the process generating mirth at times.

On Nov 30, about 10 engineers employed with smartphone maker Oppo and based in China, Japan and the United States made what they claimed is the world's first 5G-enabled cross-continent video call.

Their call was through WeChat, the most popular messaging and social-media app in China. They used Oppo's 5G prototype smartphones to make the 17-minute call under the trial 5G network bandwidth of 100 megabits per second.

5G is a once-in-a-decade opportunity for smartphone makers

A day earlier, Chinese smartphone vendor Vivo demonstrated its 5G prototype handset to the public for trial use in Beijing. Arguably, Vivo's is the first such move in the industry. Using a Vivo device on a trial 5G network, consumers were able to surf the internet.

In the first week of December, Lin Bin, president of Xiaomi Corp, posted a message on Weibo, China's Twitter-like platform, and claimed it could well be "the first Weibo post enabled by 5G network". Lin, of course, used Xiaomi's 5G-ready smartphone.

Chinese smartphone makers' research and development of 5G smartphones is happening at a time when large-scale commercial deployment of 5G networks is one or two years away. Companies are working hard to bring 5G smartphones to the market as soon as possible, with some eyeing the first half of 2019 for the earliest launch.

"They are betting on the new-generation of mobile communication technology to cope with a year-long downward spiral in global smartphone shipments, and more importantly, to prepare for a promising future where 5G devices will enable a slate of new applications," said James Yan, research director at Counterpoint Technology Market Research."5G is a once-in-a-decade opportunity for smartphone makers."

The next-gen data tech will be at least 10 times faster than 4G and will support superfast movie downloads. Downloading an 8-gigabyte content might take no more than a few seconds, said experts.

5G also has the potential to radically alter how the world's best smartphones are used every day.

Though some of these initial applications are possible in 4G, "it is 5G that is going to be a significant jump forward for phones because only with the latter's higher bandwidth that these applications can be more sophisticated and adopted by most consumers, delivering real amazing impact," Peng said.

The mounting enthusiasm for 5G handsets came as the global smartphone industry has been on the decline for six straight quarters due to market saturation.

In the third quarter of 2018, worldwide smartphone shipments fell by 3 percent year-on-year to 386.9 million units, data from the Counterpoint Technology Market Research showed.

But the advent of 5G smartphones is expected to inject new vitality into the sector. According to a report by the Counterpoint, global 5G smartphone shipments are expected to reach 108.2 million units in 2021, up an estimated 255 percent year-onyear, partially offsetting the continued shrinking of 4G handset volumes.

To pounce on the promising opportunities. Chinese smartphone makers including Huawei Technologies Co Ltd, Xiaomi, Vivo, Oppo, Lenovo, OnePlus, and ZTE Corp are all aiming to launch 5G smartphones in 2019. They are accelerating relevant R&D efforts.

Walter Ji, president of Huawei's Western European Consumer Business Group, said in an interview with the telecom website T3 in July that the company will bring 5G smartphones into the market either in its P series models in March 2019 or in its Mate series in September 2019.

"Now, the size of the (5G) chipset is not small enough to be used, to be integrated in a smartphone," Ji said, adding (5G would feature) "if not in the P30, then for sure in the Mate series next September".

The world's second-largest smartphone vendor－only Samsung Electronics Co Ltd is ahead of Huawei－invested US$15 billion to US$20 billion in R&D this year. It first beat Apple Inc in terms of smartphone shipments in the second quarter of 2018 and maintained its lead in the third quarter.

Chen Mingyong, CEO of Oppo, said in November that "5G is a trend that we must catch. In addition to being among the first batch of players to unveil 5G smartphones, Oppo will step up the exploration of application scenarios of next-gen devices, which will ultimately play a role in deciding the true value of the superfast technology".

According to him, the company will up its R&D investment to 10 billion yuan (US$1.45 billion) next year from 4 billion yuan this year. As of September, Oppo filed about 22,712 patent applications, with artificial intelligence patents exceeding 300.

Despite heavy investments by smartphone vendors, 5G growth in the early commercial phase is expected to be low due to several factors, said some analysts.

"There are still forward-looking 5G standards that are unconfirmed, creating uncertainty around product and service opportunities. We also expect 5G chips to have a higher price point which will initially drive the cost of devices up. 5G capable devices will be premium only in the beginning," said Tom Kang, research director of Counterpoint, in an industry report.