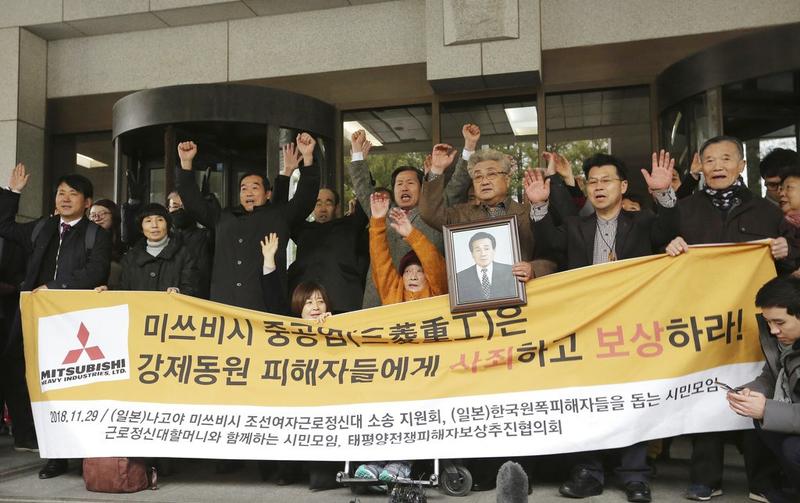 Korean victims of Japan's forced labor and their family members raise their hands in celebration after the Supreme Court's ruling ordering Japan's Mitsubishi Heavy Industries to compensate them in Seoul, in the Republic of Korea, Nov 29, 2018. (AHN YOUNG-JOON / AP)

SEOUL — The Republic of Korea's top court on Thursday ordered a Japanese company to compensate 10 Koreans for forced labor during Tokyo's 1910-45 colonial rule of the Korean Peninsula, in the second such ruling in a month that again drew quick, vehement protests from Japan.

The latest verdict on Mitsubishi Heavy Industries was widely expected after the Supreme Court ruled in late October that another Japanese company must compensate four Korean men for similar colonial-era forced labor. The Oct 30 ruling, which followed more than five years of deliberation at the court, was the first of its kind.

Japan’s Chief Cabinet Secretary demanded the ROK retract the decision immediately, warning that Tokyo could consider "all options" including taking the issue to the International Court of Justice

The back-to-back rulings in the ROK are threatening to undermine relations with Japan, which says all compensation issues were settled when Tokyo and Seoul signed a treaty in 1965 that restored diplomatic ties. The rulings are expected to affect similar lawsuits pending in South Korean courts.

"The ruling not only imposes unfair damages to Japanese companies but fundamentally overturns the legal foundation of friendly and cooperative relations that Japan and South Korea have built since the 1965 normalization," Kono said.

Japan made similar protests when the ROK court ruled last month that Japan's Nippon Steel & Sumitomo Metal Corp should provide compensation of 100 million won (US$87,680) to each of the four plaintiffs.

Seoul and Tokyo, both key US allies, are closely linked to each other economically and culturally. But their historical and territorial disputes stemming from Japan's colonial occupation have often complicated Washington's efforts to strengthen trilateral cooperation to deal with nuclear threat from the Democratic People’s Republic of Korea (DPRK). 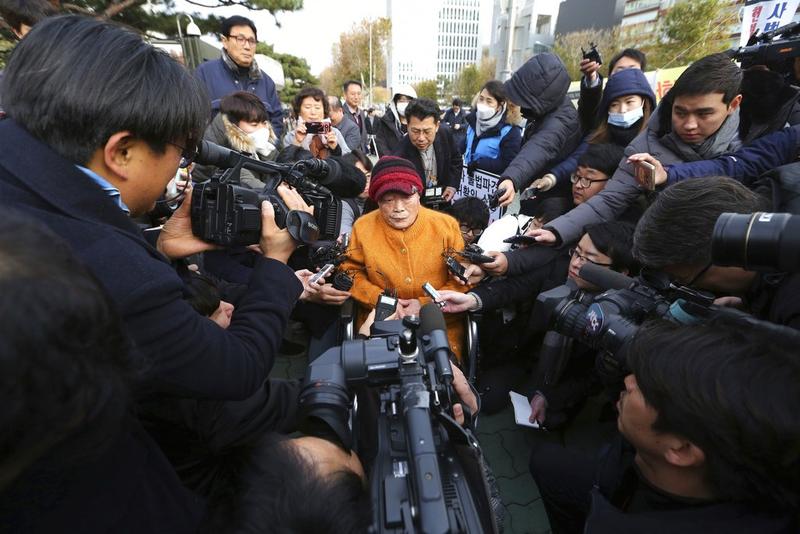 Kim Sung-joo, center, a victim of Japan's forced labor, speaks upon her arrival at the Supreme Court in Seoul, the Republic of Korea, Nov 29, 2018. (AHN YOUNG-JOON / AP)

In two separate verdicts involving 10 forced laborers or their bereaved family members, the Supreme Court said Thursday that Mitsubishi must provide 80 million to 150 million won (US$71,190-US$133,510) in compensation to each of the plaintiffs.

The court said that the 1965 treaty cannot prevent individual rights to seek compensations for forced labor because Japanese companies' use of such laborers were "acts of illegality against humanity" that were linked to Tokyo's "illegal" colonial rule and its war of aggression.

Outside the court, one of the aging plaintiffs, Kim Sung-joo, raised her hands with her family members and supporters in celebration of the ruling. But she also recounted what she described as a bitter memory of working at a Mitsubishi factory in Japan.

"One of my fingers was cut off (while working). I spilled my blood and cried a lot. I cried because I didn't know why I had that kind of hardship in Japan," Kim, sitting in a wheelchair, told reporters.

After its liberation from Japan, the Korean Peninsula was divided into US-allied ROK and Soviet-backed DPRK. Many in both Koreas still harbor strong resentment against the Japanese rule, during which hundreds of thousands of Koreans were forced to work as laborers for Japanese companies or sex slaves for Japanese soldiers in wartime brothels. When the ROK and Japan signed the 1965 treaty, Seoul received more than US$800 million in economic aid and loans from Tokyo and used the money to rebuild its infrastructure and economy devastated by the Korean War.

Last week, the ROK announced a plan to dissolve a Japan-funded foundation aimed at compensating former sex slaves in the country. The move, which would effectively kill a contentious 2015 deal to settle the impasse over the sexual slavery, was criticized by Japan.