Trump says 'Iran did do it,' US seeks support on tanker attacks 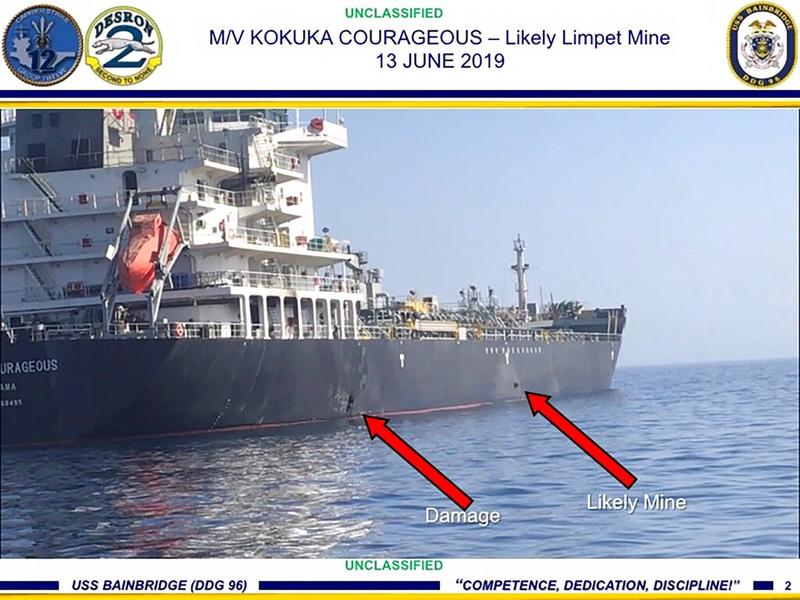 This June 13, 2019 image released by the US military's Central Command, shows damage and a suspected mine on the Kokuka Courageous in the Gulf of Oman near the coast of Iran. The US military on June 14, 2019 released a video it said shows Iran's Revolutionary Guard removing an unexploded limpet mine from one of the oil tankers targeted near the Strait of Hormuz. Iran rejects the US accusation against Tehran over the suspected attacks on two oil tankers. (US CENTRAL COMMAND VIA AP)

DUBAI/WASHINGTON – The United States on Friday blamed Iran for attacks on two oil tankers at the entrance to the Gulf and said it was seeking international consensus about the threat to shipping, despite Tehran denying involvement in the explosions at sea.

Thursday's attacks raised fears of a confrontation in the vital oil shipping route at a time of increased tension between Iran and the United States over US sanctions and military moves in the Middle East, Tehran's proxy groups in the region and its nuclear program.

"Iran did do it and you know they did it because you saw the boat," US President Donald Trump told Fox News.

He was referring to a video released on Thursday by the US military which said it showed Iran's Revolutionary Guards were behind the blasts that struck the Norwegian-owned Front Altair and the Japanese-owned Kokuka Courageous in the Gulf of Oman, at the mouth of the Gulf.

Iran said the video proved nothing and that it was being made into a scapegoat. "These accusations are alarming," Foreign Ministry spokesman Abbas Mousavi said.

Iran has dismissed earlier US charges that it was behind the attacks and has accused the US and its regional allies such as Saudi Arabia and the United Arab Emirates of "warmongering" by making accusations against it.

Last month, the US sharply tightened economic sanctions that are damaging the economy of Iran, which in response has threatened to step up its nuclear activity. Tehran has said it could block the Strait of Hormuz, the main route out for Middle Eastern oil, if its own exports were halted.

Trump, who last year pulled the US out of an agreement between world powers and Tehran to curb Iran's nuclear program in exchange for some sanctions relief, said any move to close the Strait of Hormuz would not last long but added that he was open to negotiations with Iran.

Iran has repeatedly said it will not re-enter talks with the US unless it reverses Trump's decision to withdraw from the 2015 nuclear deal.

Tehran and Washington have both said they have no interest in starting a war. But this has done little to assuage concerns that the two arch foes could stumble into a conflict.

A US official told Reuters on Friday a surface-to-air missile was fired from Iranian territory on Thursday morning at a US drone that was near Front Altair following the attack on the tanker. The missile did not hit the drone, the official said. 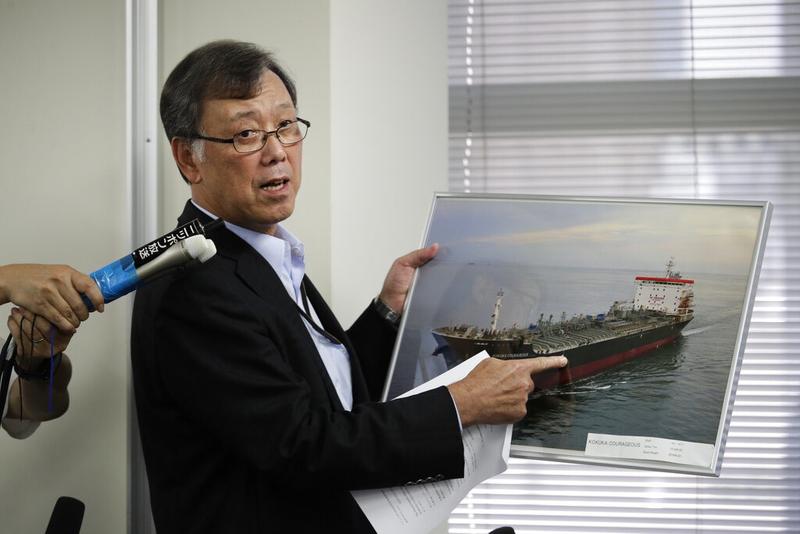 Yutaka Katada, president of Kokuka Sangyo Co, the Japanese company operating one of two oil tankers attacked near the Strait of Hormuz, shows a photo of the attacked oil tanker during a news conference June 14, 2019, in Tokyo. (JAE C HONG / AP)

"When you look at the situation, a Norwegian ship, a Japanese ship, the Kingdom of Saudi Arabia, the UAE, 15 percent of the world's oil flows through the Strait of Hormuz," he said.

"So we obviously need to make contingency plans should the situation deteriorate. We also need to broaden our support for this international situation.”

Oil prices rose about 1 percent on Friday, reflecting the jitters. Insurance costs for ships sailing through the Middle East have jumped by at least 10 percent after the attacks, ship insurers said.

UN Secretary-General Antonio Guterres called for an independent investigation of the attacks.

The tanker attacks took place while Prime Minister Shinzo Abe of Japan was visiting Tehran on a peacemaking mission, bringing a message from Trump.

Iran dismissed Trump's message, details of which were not made public.

"I do not see Trump as worthy of any message exchange, and I do not have any reply for him, now or in future," Iranian Supreme Leader Ali Khamenei said.

Washington has also blamed Iran or its proxies for attacks on May 12 that crippled four oil tankers in the same area, and has said Tehran was behind May 14 drone strikes on two Saudi oil-pumping stations. Tehran has denied all those charges.

The US military said black-and-white footage it filmed from a US aircraft showed Iran's Guards on a patrol boat drawing up to the Kokuka Courageous and removing an unexploded limpet mine from its hull.

The Japanese-owned tanker, abandoned by its crew, was being towed to a port in the United Arab Emirates on Friday, after a Dutch firm said it had been appointed to salvage the ships.

The second tanker, the Front Altair, which was set ablaze by a blast, was still languishing at sea, although the fire that had charred the hull had been put out.

China, the European Union and others have called for restraint from all sides. In a notable signal that close US allies are wary of Washington's position, Germany said the US video was not enough to apportion blame for Thursday's attack.

But British Foreign Secretary Jeremy Hunt differed, saying no other state or non-state actor could have been responsible.

There have been conflicting accounts of the cause of Thursday's blasts. An initial report that Kokuka Courageous was struck by a torpedo was dismissed by a source familiar with the issue. The owner of the tanker, which carried methanol, later said it was hit by two "flying objects".

Iranian TV showed 23 crew in Iran believed to be from Front Altair on Friday, and said its experts would assess whether they could return to the ship. The crew from Kokuka Courageous were picked up and handed to a US Navy ship on Thursday.