In Hunan, porcelain has place of honor

By Liu Xiangrui and Feng Zhiwei in Changsha 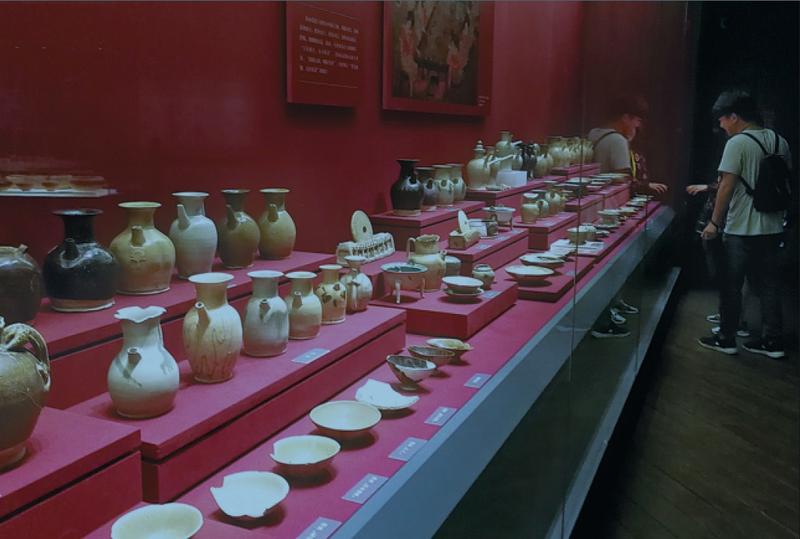 A collection displayed at the Museum of Tongguan Kiln Porcelains in Changsha, Hunan province, sheds light on the area's porcelain-making past. (LIU XIANGRUI / CHINA DAILY)

From bowls decorated with cultural elements from western Asia to kettles inscribed with Arabic words, a collection displayed at the Museum of Tongguan Kiln Porcelains in Changsha, Hunan province, sheds light on the area's glory as a porcelain base in ancient times.

Of the more than 1,700 pieces, 162 were part of a shipment of ninth-century porcelain that left China during the Tang Dynasty (618-907) aboard an Arab boat, which later sank in Indonesia's Java Sea.

In 1998, a German salvage company discovered the shipwreck of the Batu Hitam, one of the earliest shipwrecks to be found along the Maritime Silk Road.

More than 67,000 pieces of porcelain were found in the ship, 85 percent of which had been produced by Tongguan kilns.

According to Qu Wei, curator of the museum, Tongguan was the birthplace of China's multicolored porcelains and the Tongguan kilns can be regarded as export-oriented industrial clusters, with products sent to nearly 30 countries and regions, reaching as far as South Asia and northern Africa.

Cheaper prices, unique multicolored underglaze painting and foreign cultural elements integrated into the shapes and decorations made the Tongguan kilns' products a favorite for export in the middle and late Tang Dynasty, Qu said.

However, the Tongguan kilns began to decline after the Tang and were even forgotten after the Song Dynasty (960-1276).

"Because the kilns produced cheaper daily wares that were mostly used by ordinary people, historical records about them were rare," Qu said.

Tongguan kilns only became known to the public again in the 1950s, thanks to the archaeological founding of massive relic sites of ancient kilns in the region.

The archaeological site, which covers 300,000 square meters, has been protected as an important heritage by the province since 1983.

In recent years, the local government has sought to revive the region's long tradition of porcelain-making and boost local industry.

To create an industrial mode of "ceramics, plus cultural creation, plus tourism", the government has restored a 500-meter old street and turned it into a cultural district specializing in the development, sales and exhibition of ceramics and supplemented by tourist functions such as restaurants and hotels.

Peng Wangqiu, a resident who is an inheritor of the local porcelain-making craft as a cultural intangible heritage, was one of the earliest to locate his porcelain shop on the street.

He once operated a ceramic workshop in neighboring Guangdong province but was invited by the local government to open his shop in Tongguan a few years ago. He now owns a porcelain factory, which brings in more than 2 million yuan annually.

Peng has innovatively upgraded his porcelain products by integrating his sculpturing skills with the local tea culture, and he said the attempts have been successful.

"With the local government's supportive policies and growing respect for craftsmen, most of the craftsmen who left to seek livelihoods outside have returned," Peng said.