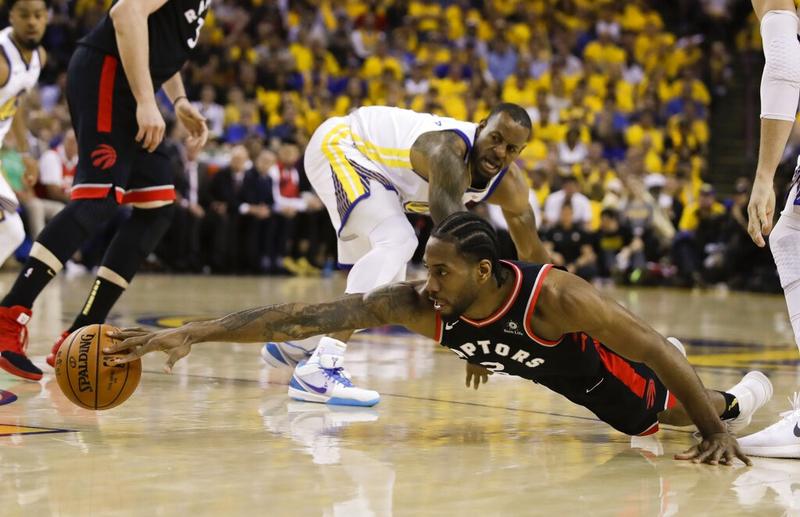 Toronto Raptors forward Kawhi Leonard, foreground, reaches for the ball in front of Golden State Warriors forward Andre Iguodala during the first half of Game 3 of the NBA Finals in Oakland, California, June 5, 2019. (BEN MARGOT / AP)

OAKLAND — For every amazing shot in a career night by Stephen Curry on his home court, Kawhi Leonard, Kyle Lowry and Danny Green kept finding dazzling answers of their own.

The Toronto Raptors decided to "let it rip," and now they have the momentum again in these back-and-forth NBA Finals.

Leonard scored 30 points on a night Curry went off for a playoff-best 47, and the Raptors beat the banged-up Golden State Warriors 123-109 on Wednesday for a 2-1 series lead.

Curry had eight rebounds and seven assists but couldn't do it all for the two-time defending champions, who were missing Kevin Durant, Klay Thompson and Kevon Looney

Curry also had eight rebounds and seven assists but couldn't do it all for the two-time defending champions, down starters Kevin Durant and Klay Thompson and key backup big man Kevon Looney because of injuries.

"They outplayed us. They deserved it," Warriors coach Steve Kerr said. "I'm very proud of our effort, and now we've just got to bounce back and hopefully get back in here Friday night and hopefully get a little healthier and get some guys back."

Splash Brother Thompson missed his first career playoff game after straining his left hamstring late in Game 2, while Looney is out the rest of the series after a cartilage fracture on his right side near the collarbone that also happened Sunday. Durant, a two-time reigning NBA Finals MVP, has been sidelined nearly a month because of a strained right calf.

Game 4 is Friday at Oracle Arena, where Warriors fans will be rooting for the returns of Durant and Thompson.

Before the game, one of the Raptors wrote "let it rip" on the locker room board. 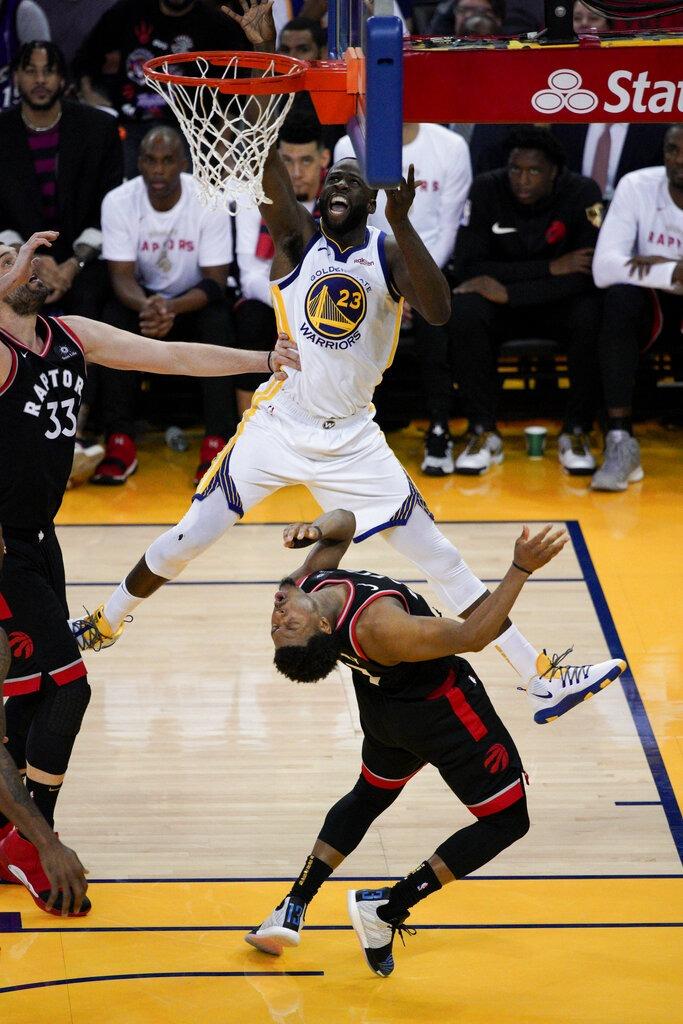 Lowry contributed 23 with five 3-pointers and Green had 18 points with six 3s after Pascal Siakam got the Raptors rolling early. Toronto shot 52.4% and made 17 from deep.

"I give our guys a lot of credit. I thought we answered a lot of runs," Raptors coach Nick Nurse said. "Each time they chipped, we kind of answered back. And that's kind of what you got to do if you're going to keep your lead."

The Warriors trailed 96-83 going into the final quarter. Curry's three free throws at 10:37 made it a seven-point game before back-to-back baskets by Serge Ibaka.

Siakam scored 18 points and established the momentum for Toronto from the tip, hitting his first three shots and setting a tone for a defensive effort that stayed solid without the foul problems that plagued the Raptors in Game 2.

"Every time we made a run or got the crowd into it they either made a tough 3 or there was a tough foul call and they slowed the tempo down or something went their way," Curry said. "You have to tip your cap to all the guys who made pivotal plays in the right times." 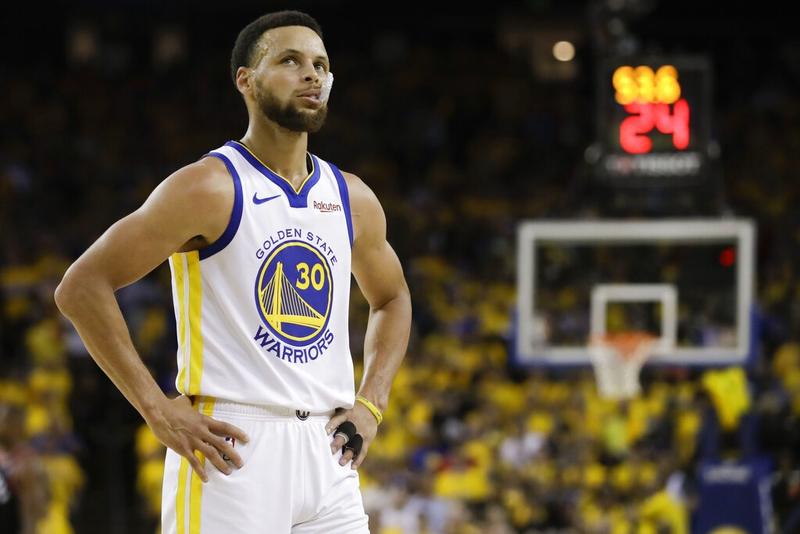 Golden State Warriors guard Stephen Curry looks on during the first half of Game 3 of the NBA Finals against the Toronto Raptors in Oakland, Califonia, June 5, 2019. (BEN MARGOT / AP)

Golden State greatly missed not only Thompson's touch from outside but also his stifling defense.

Nurse challenged his team to produce more defensive stops in order to get out in transition — "make them miss more," he said.

The Raptors re-watched the costly 18-0 run by Golden State in Game 2, then got six blocked shots from Ibaka.

"We know that they're going to make good runs and make shots but we watched that third quarter in Game 2 and we've just got to continue to play with pace," Lowry said. "That was the one thing about it, we played with pace, half-court, full-court, and that was a big thing for us."

Nurse pulled out a box-and-one to try to stymie Curry in Golden State's 109-104 Game 2 win, then the Raptors made Curry's short-handed supporting cast try to beat them this time — and it sure worked. 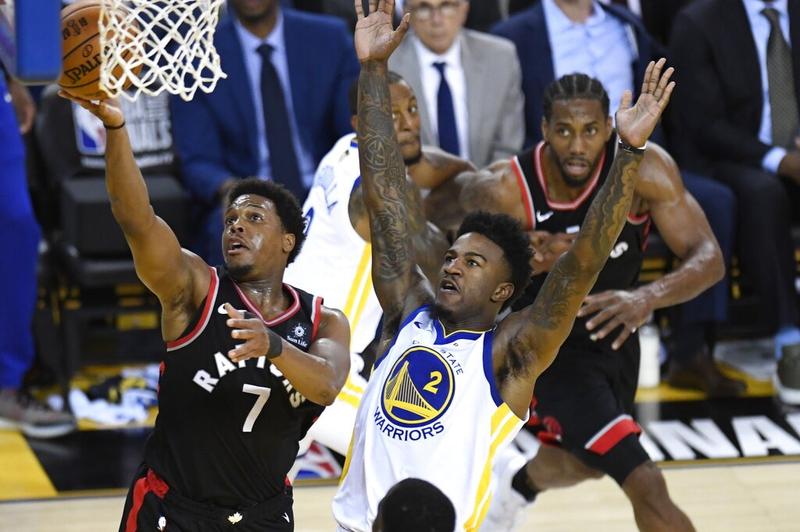 Raptors: All five Toronto starters scored in double digits and Fred VanVleet added 11 off the bench. ... The Raptors began 10 for 14 and scored 12 early points in the paint. .. Former Warriors G Patrick McCaw, who departed after last season in contract dispute, drew boos from the crowd when he checked into the game late in the first.

Warriors: Curry's 17 first-quarter points matched his most in the period for the postseason. He also did so on April 27, 2014, against the Clippers. ... In the first half, Curry was 4 of 8 from 3-point range the rest of the Warriors 1 for 11. ... Draymond Green's streak of double-doubles ended at a career-best six games after he had 17 points and seven rebounds. A 12th would match Denver's Nikola Jokic for most in the 2019 playoffs. ... Tim Hardaway from the Warriors' "Run TMC" era attended the game. 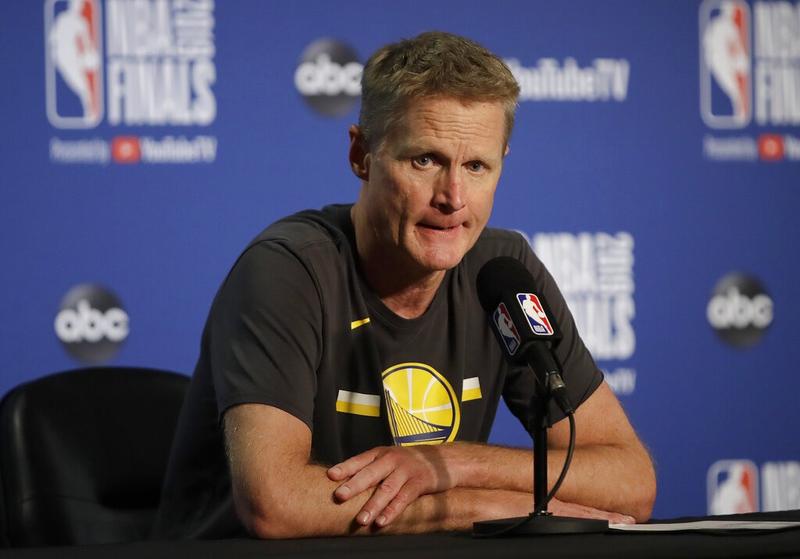 Golden State Warriors head coach Steve Kerr speaks at a news conference after Game 3 of the NBA Finals between the Warriors and the Toronto Raptors in Oakland, California, June 5, 2019. (BEN MARGOT / AP)

Durant went through extensive workouts both Tuesday and Wednesday at the practice facility with the hope he would do some scrimmaging Thursday. While the Warriors aren't scheduled for a regular practice, Kerr said some of the coaches and younger players might be called upon to give Durant the full-speed court work he still needs before being medically cleared to return.

He missed his eighth straight game since the injury May 8 in Game 5 of the Western Conference semifinals against the Rockets.

Thompson was hurt in Game 2 and was to be evaluated by the training staff before tipoff. He didn't end up warming up on the court.

DeMarcus Cousins went to the locker room late in the game to be checked but Kerr expects him to be fine.

The home fans waited 20 days between home playoff games after the Western Conference finals sweep of Portland before Golden State opened the finals in Toronto.

It had been since Game 2 against the Trail Blazers on May 16 that the Warriors hosted — the second-longest lapse between home games since the current 16-game, four-round format was established in 1983.

The Warriors hosted a Game 3 in the finals for the first time since winning the 1975 title, having begun at home in each of the previous four.