By Yang Han in Cikarang, Indonesia 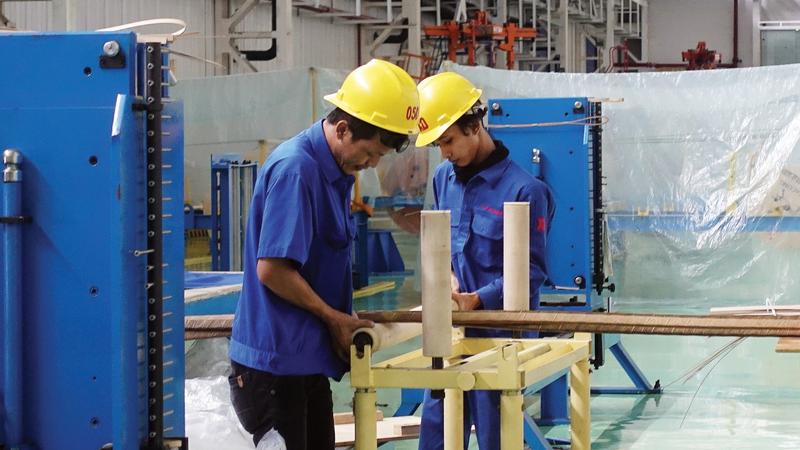 Local staff work in the winding workshop of XD Sakti at KITIC, the China-Indonesia Economic and Trade Cooperation Zone, in Bekasi Regency, Indonesia, on May 8. (YANG HAN / CHINA DAILY)

For Lusy Rustam, a third-generation Chinese Indonesian, the progress made by an Indonesian industrial park her company co-developed over a decade ago has exceeded even her most optimistic expectations.

Rustam is the management representative at Sentrabumi Palapa Indonesia, a local automobile assembly company. Back in 2008, her company, with a 5 percent share, jointly established the China-Indonesia Economic and Trade Cooperation Zone (KITIC) with Guangxi State Farms Group, a leading manufacturing enterprise in China.

KITIC is one of China’s first national-level economic and trade cooperation zones in Indonesia, and it is also the first of its kind established overseas by the Guangxi Zhuang autonomous region.

“The development of KITIC is completely beyond our expectations,” said Rustam, who is also deputy general manager of KITIC. “When we first invested, the whole area was nothing but a stretch of barren land. There were not many companies around and no one knew there would be a Belt and Road Initiative.”

But the family business still decided to form the partnership since Rustam’s father wanted to support it.

Located in the Greenland International Industrial Center in the industrial area of Cikarang, Bekasi Regency, KITIC is 60 kilometers from Jakarta’s Soekarno-Hatta International Airport and 50 km from Tanjung Priok Port, one of the country’s busiest ports.

Built completely from scratch, the zone has a total area of 455 hectares, with the first phase covering 205 hectares and the second covering 250 hectares. To attract investment and boost trade, it offers preferential tax rates, legal consultancy and other related services for businesses, in addition to a park-like environment and complete infrastructure.

Since its first investor came on board in 2011, KITIC is now home to 47 companies from China, Indonesia, Malaysia, Japan, New Zealand, Finland and the United States, with total investment exceeding US$1 billion.

About 30 companies have already gone into operation there, according to Chen Feixia, general manager and director of KITIC, who added that construction of the second phase will begin this year.

Chen said that investment only started to pour in after the BRI was announced.

“It was really difficult to attract investment in the first few years because not many Chinese companies were thinking about expanding overseas, and they were not so familiar with the business environment in Indonesia,” said Chen.

KITIC has created more than 3,000 jobs for the archipelago, while paying over US$90 million in taxes, according to Chen.

Zhang Xuefeng, chairman of XD Sakti Indonesia, a manufacturer of power equipment, said the reason the company chose KITIC is because “it is located in the heart of the Jakarta-Bandung economic corridor, (between) Indonesia’s capital and its third-largest city”.

“Indonesia can be our hub to (reach) the Southeast Asian market,” Zhang added.

The company is the Indonesian branch of China XD Group, one of the biggest power equipment manufacturing companies in China that focuses on researching, developing and manufacturing high and ultra-high AC/DC transmission and distribution equipment.

XD Sakti Indonesia is the largest transformer manufacturer in Indonesia as well as Southeast Asia, according to the company. At present, its main client is Indonesia’s state-owned power company Perusahaan Listrik Negara.

Chinese dairy giant Mengniu took less than a year to set up its factory in KITIC. With an investment of US$50 million, the plant is designed with an annual production value of US$160 million.

“The Indonesian factory is the smallest in size among all Mengniu factories worldwide, but it has the highest output rate per unit area,” said Bella Jia, executive manager of Mengniu Dairy Indonesia, adding that the factory serves the local market as well as neighboring countries and regions.

Mengniu, which started operation in KITIC in November, plans to increase the localization rate to over 85 percent.