Protesters storm Bahrain embassy in Iraq over US peace conference 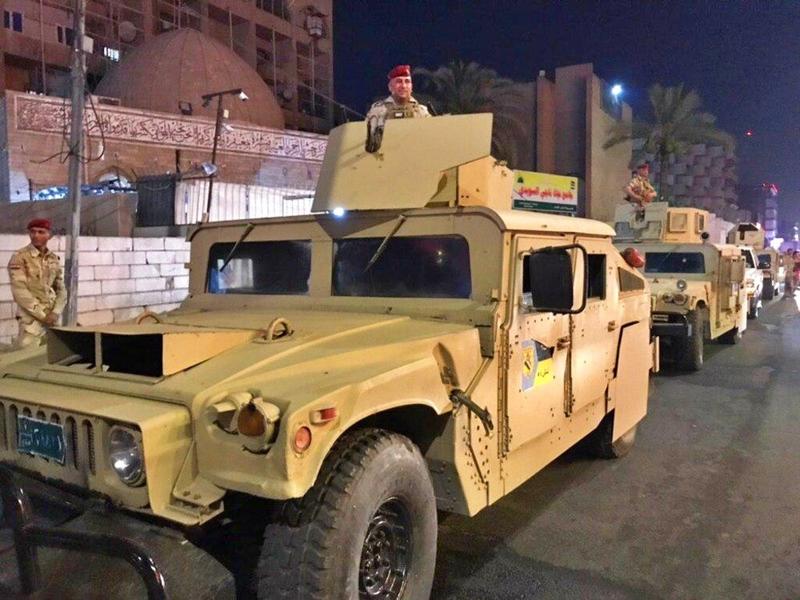 BAGHDAD — Protesters stormed the Bahraini embassy compound in Baghdad Thursday night, removing the flag from above the building and replacing it with a Palestinian banner in protest against a conference held in the gulf nation to promote peace between Arabs and Israelis.

Bahrain's Foreign Ministry condemned the attack saying the kingdom is calling back home its ambassador Salah Ali al-Maliki for discussions. It added that Iraqi authorities have a responsibility to protect the embassy in Baghdad.

The Iraqi government issued a statement expressing "deep regret" over the attack and vowing to "bring all saboteurs to justice."

The attack on the embassy could affect relations between Iraq and nearby gulf nations at a time when they have been improving in recent months since Iraqi Prime Minister Adel Abdul-Mahdi took office. It was believed to have been carried out by supporters of Iran-backed Iraqi militias.

The Iraqi government issued a statement expressing "deep regret" over the attack and vowing to "bring all saboteurs to justice." The statement said Iraqi security forces took firm measures to force the protesters out of the embassy.

READ MORE: US pushes peace plan in face of Palestinian disdain and doubts

Iraq's Foreign Ministry spokesman Ahmad al-Sahhaf told The Associated Press that Baghdad condemns the attack on the embassy adding that "Iraqi authorities will go after those who took part of the attack as well as the instigators."

No one was hurt in the standoff that lasted more than an hour and later in the night Iraqi security forces were in control of the area. Iraqi troops were deployed around the compound in the late hours of Thursday.

An Iraqi security official said the protesters forced their way in by breaking through the main gate but stayed in the garden without storming the offices inside the compound. The official, who spoke on condition of anonymity in line with regulations, said security forces opened fire in the air to disperse the protesters and reinforcements were sent to Bagdad's western neighborhood of Mansour where the embassy is.

ALSO READ: US to solicit funds for Mideast peace plan at Bahrain conference

Interior Ministry spokesman Maj Gen Saad Maan said protection of diplomatic missions is a "red line." He added that 54 people have been detained for taking part in the attack.

Iraq's newly named Interior Minister Yasssin al-Yassiri visited the compound around midnight and then held a meeting with the Bahrain ambassador in a safe place outside the embassy.

54 people have been detained for taking part in the attack

The Bahraini diplomats were evacuated earlier from the compound into the heavily fortified Green Zone that is home to the Iraqi government headquarters, after the mission received threats, the official said.

The two-day workshop in Bahrain that ended Wednesday was to promote the Trump administration's US$50 billion economic support plan for the Palestinians ahead of a Mideast peace plan, widely known as the Deal of the Century, to be announced later.

Several Arab countries boycotted the Bahrain conference including Lebanon and Iraq as well as the Palestinian authority.

Bahraini Foreign Minister Sheikh Khalid bin Ahmed Al Khalifa was criticized by some Arab and Iranian media outlets for giving an interview to an Israeli TV station in which he said that Palestinians made a mistake by boycotting the workshop.

Saudi minister for Gulf affairs Thamer al-Sabhan tweeted that "what is happening now at the Bahraini embassy in Baghdad is very regrettable."

Anwar Gargash, the United Arab Emirates minister of state for foreign affairs, tweeted that the attack on the embassy is "a major escalation on the legal and political levels." He called on the Iraqi embassy to protect diplomatic missions in Iraq.

The crisis gripping the Middle East stems from President Donald Trump's withdrawal of the United States a year ago from the nuclear deal between Iran and other world powers and then imposing crippling new sanctions on Tehran.