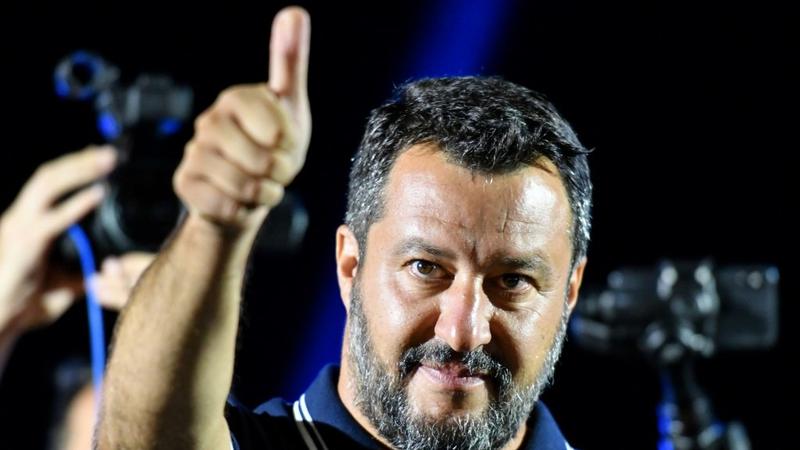 Deputy Prime Minister Matteo Salvini picked an immigration fight with his coalition partners as he looks to keep his signature issue center stage ahead of a showdown in the Italian Senate next week.

Salvini’s order to keep Spanish rescue ship Open Arms from docking has put him at odds with the courts and with Prime Minister Giuseppe Conte and his allies in the splintering coalition government. The vessel remained at sea Friday with more than 130 migrants aboard after 13 were allowed to disembark to receive medical attention, according to local media reports.

The standoff allows Salvini, also the interior minister, to play the anti-immigration champion as the League party leader starts a push for new elections that could see him heading the next government. Last week, he pulled his support for the fractious coalition with the anti-establishment Five Star Movement and a vote to dissolve the government could come as soon as Tuesday.

Conte, who does not belong to any party and who has become one of the main obstacles to Salvini’s ambitions, accused his deputy of disloyalty Thursday and said Salvini had misrepresented his comments regarding the migrants.

Salvini wasted no time responding. In a lengthy news conference on a public holiday in Italy he called Conte’s accusations unfair and said that his actions conform with the constitution.

The League leader’s attacks on immigration policy have been key to the party’s soaring popularity. Initially the junior partner in Conte’s government, the League is now backed by about 40% of Italians, polls show. That could set up an election win that would allow the party to govern without a coalition partner.

Conte will address the Senate in Rome on Tuesday, possibly leading to a confidence vote, though it may not take place the same day. If he loses, it would then be up to President Sergio Mattarella to either move toward a snap election or see if an alternative coalition can be formed.

Salvini’s defiance over the refugee ship has intensified the ongoing conflict with Five Star. Defense Minister Elisabetta Trenta refused to sign off on his request to reinstate the ban, after a regional court declared it illegal, and allowed navy ships to escort the vessel into Italian waters. Five Star leader Luigi Di Maio weighed in, saying Salvini is working to break up a government that had been handling the refugee issue effectively.

Trenta said that Salvini’s attempt to defy the court order may be a criminal act and that she refused to back his request for a new ban “in the name of humanity,” La Repubblica said.

Separately, the Spanish government said in a statement Thursday that it’s willing to participate in a “balanced sharing-out” of the migrants on Open Arms. France, Germany, Romania, Luxembourg and Portugal had also indicated that they are willing to take some of the refugees, Conte said.

Salvini has clashed with courts as well as multiple politicians in Italy and Europe over his repeated efforts to block refugee boats from landing at Italian ports. The public prosecutor in Agrigento has opened an abuse of office case against Salvini, according to La Repubblica.