In a world of no private vehicles

Turning Hong Kong into a smart city has long been on the government’s agenda. With smart mobility being the first hands-on experience for the public, experts told Wang Yuke that private cars are the first hurdle in this transformation.

We have come to the dying days of the private automobile, experts tell us, and Hong Kong is joining a global movement to stem the spread of what has become an urban nightmare.

Electronic road pricing (ERP) seems apt for a city experiencing excessive gas pedal and dyspepsia from a glut of urban traffic. It’s a system Hong Kong plans to implement next year. Its objective is to levy fees against motorized vehicles which insist on driving on the city’s most congested roads during peak commuting hours.

Introduction of ERP will reduce the reliance on private vehicles, says Charles So, chairman of Smart Mobility Committee of the Smart City Consortium. The feasibility of ERP has been under study since 1997. The Transport Department released its study of the proposal last year. The study recommended that charges be levied at peak traffic hours throughout the day, especially 8 am to 9 am and 5:30 pm to 7 pm. The study also recommended lower chargers during inter-peak hours and went on to predict that the reduced traffic would mean that travel times through the city’s torrid zones could be cut by up to 25 percent.

Singapore was the first city to introduce ERP in 1998. Wireless technology has been adapted to link an overhead system registering the passing traffic with wireless units inside vehicles on the road. The traffic levy is deducted from a smart card inside the in-vehicle-unit.

So envisioned in-vehicle units factoring into the Hong Kong ERP. He noted that apart from ERP charging, the in-vehicle-unit system will collect traffic data for analysis. 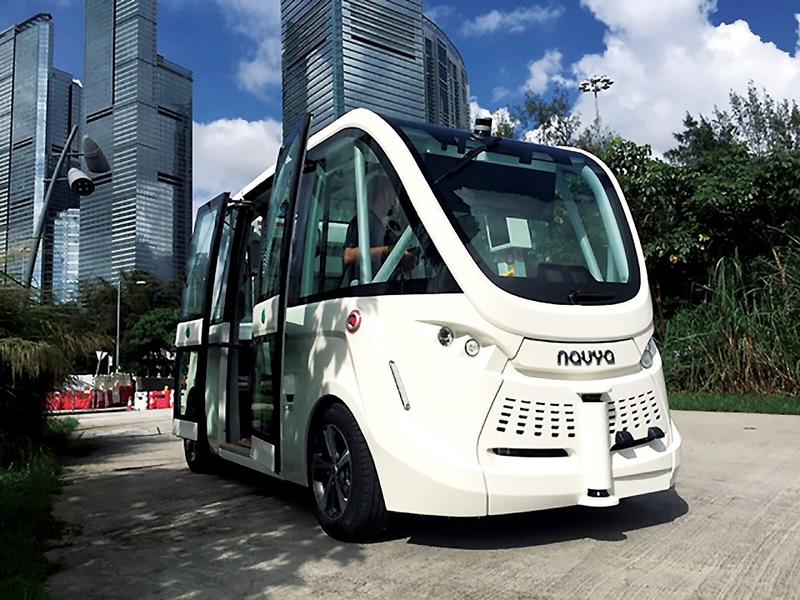 An autonomous vehicle is under trial in the city. (PHOTO PROVIDED TO CHINA DAILY)

There are roughly 600,000 private cars in Hong Kong. That’s not bad given the city’s 2.51 million households. What is alarming, however, is that the number of private cars grew by 48.7 percent between 2006 and 2016. That’s 3 to 4 percent a year. The population has grown only 0.4 percent annually over the past 15 years.

Private cars are huge contributors to the traffic problem in Hong Kong, said Evan Auyang, chairman of the independent public policy think tank Civic Exchange. He points out that the addition of traffic lanes cannot accommodate the excess traffic for the past 10 years. It’s predicted that the annual growth rate of road length would slow down to around 0.4 percent — lower than the annual increase in the growth rate of private vehicles. The findings came from a study, released in 2014, by the Transport Advisory Committee.

What does it all mean?

Regular commuters are faced almost daily with the congestion nightmare. Take Grace Mak, manager of the famous high jumper Cecilia Yeung Man-wai. Mak likes to be on time but that can be a challenge in Hong Kong. “I was late by half an hour for a scheduled shooting session with Cecilia. I felt very sorry about that,” recalled Mak. “The photo shoot was scheduled at around noon. I expected traffic would be heavy, so I left an hour and a half early. I ended up being trapped in a taxi in the Cross-Harbour Tunnel.” Mak’s frustration stems from the fact that celebrities are often on tight schedules. It’s Mak’s job to make sure they get to where they’re going on time. She lamented the fact that traffic is getting worse but there’re still no restrictions on the growing number of private cars. 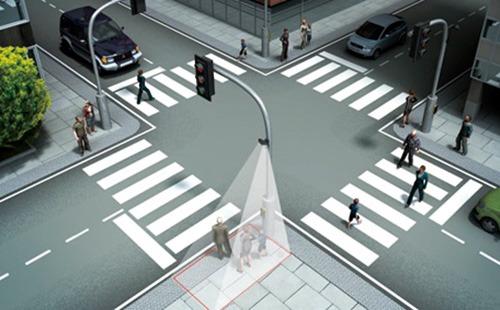 Future road users — pedestrians and vehicular users — and street furniture, such as signs, can communicate with each other. (PHOTO PROVIDED TO CHINA DAILY)

Future road users — pedestrians and vehicular users — and street furniture, such as signs, can communicate with each other. (PHOTO PROVIDED TO CHINA DAILY)

Private car, a thing of the past

The prevalence of shared transportation will likely lessen the demand for private cars and abate people’s desire for buying private cars.

Conventional wisdom holds that private car ownership will become obsolete, which is based on the idea that the next model of transport will be shared mobility, with fleets of cars on call for private users, says Civic Exchange Fellow Jain Alok.

Mobility as a Service (MaaS) will contribute to a decline in private cars, effectively making them obsolete, remarked Alok. People will commute by shared, autonomous cars, instead of driving their own cars. The new form of mobility service is based on a common platform through a single mobile app. The platform allows users to choose their preferred mode of transportation, including autonomous vehicle providers planning your journey and settling payment automatically in one go,” Alok explained.

John Zimmer, the president of Lyft, an on-demand transportation company based in San Francisco, made the bold statement two years ago that private automobile ownership will “all but end” in major US cities by 2025. It is a global trend, and true to Hong Kong as well, Alok considered.

The MaaS concept derived from Finland has been accepted and practiced in many cities phase by phase, such as Stockholm, London and Dubai. For example, UbiGo’s mobility app was launched in Stockholm in April. The app offers services for car-sharing and ride-riding, rental car services, taxis and shared bikes in one on-demand service. The system is scheduled for a full rollout by the end of this year. Another MaaS pioneer is Germany-based moovel Group, which has provided a MaaS platform since 2015 and attracted 5 million users. Everything connected with users’ journey may be managed directly from the platform. 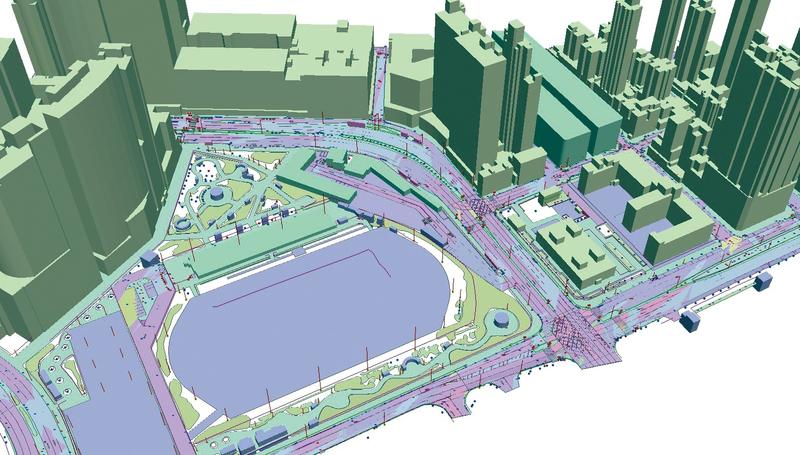 App developers in Hong Kong are working feverishly to improve autonomous driving. A mobile mapping system (MMS) developed by Ambit Geospatial Solution can capture road features data in great detail. Eric Yau, a senior manager from Ambit with rich experience in the geospatial discipline, said that “the more data you provide to the navigation system and the more elaborate the data are, the more accurate decisions will the system make”. Decisions involve, for example, navigating barriers on road surfaces, detecting lane markings and changing lanes, estimating the position and direction of a moving vehicle, decelerating in the presence of a gradient, and driving at the safest speed on a rainy or snowy day.

The MMS is configured to encompass lidar (light detection and ranging), cameras, sensors and GPS antenna to detect data of objects on the road. Mounted on a car’s roof, it cruises on roads to capture traffic data. Then the data are stored in the automatic navigation system so that the system can make more accurate descriptions. Traffic data is complex — a muddled flurry of cars, buses, trucks, pedestrians, lanes and all kinds of road features. Some are predictable and some are not. “With multiple sensors embedded, the MMS is getting more sophisticated and can generate data in finer detail.” The technology is crucial to improving the safety of self-driving vehicles, paving the way for self-driving vehicles used as a shared service.

An autonomous vehicle pilot was initiated jointly by Hong Kong Science and Technology Park and the Chinese University of Hong Kong. An autonomous car route between Science Park and University railway station is projected to go into operation within two to three years.

Before private cars disappear from the road, the city has to think hard about methods to keep congestions at bay. Smart technologies are innovated for drivers using heavily congested areas. Appus Technology Ltd, a startup founded in 2014 in Cyberport, specializes in developing smart phone applications for drivers, who can exchange real-time traffic information on the platform with other users within a radius of 500 meters to 5 kilometers, “so that they can change routes, if there are alternatives, in the event of traffic jam ahead of the road”. Their OmyCar is one of the most popular apps in the city, downloaded 150,000 times with 85 percent of users being private vehicle drivers.

From a traffic and transport perspective, private vehicles contribute to 50 percent of road traffic in some major roads, but cover only around 10 percent of commuter trips, and are thus considered inefficient passenger carriers, according to the 2030+ Transport Infrastructure and Traffic Review conducted by the Planning Department in 2016.

“Carry capacity” and “flexibility” are key components when it comes to determining whether a means of transport is reliable or not, said Tsang Wing-hang, president of the Chartered Institute of Logistics and Transport Railway. “The railway is the most reliable and efficient transportation system in the city, given that each train can carry up to 3,000 passengers and that trains run as frequently as every two minutes.” Besides, the railway network allows alternative lines when emergencies arise, so there’s great flexibility, Tsang said. He believes railways will remain the mainstay of the city’s transport. 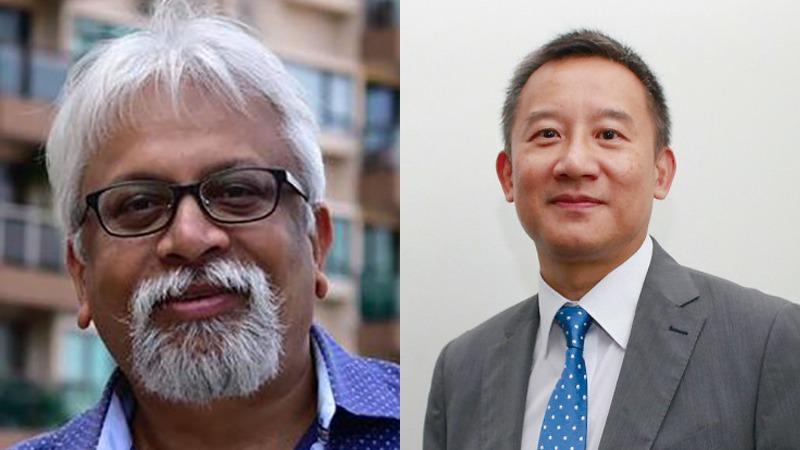 “With six railway lines due for completion by 2031, the railway network is expected to serve areas inhabited by 75 percent of the local population and about 85 percent of job opportunities within the 500 meters of a railway catchment,” said Tsang. Currently, 59 percent of the population lives in metropolitan areas, accounting for 76 percent of the total employment in the city, which suggests that many have to travel long distances to the New Territories to work. “The mismatch between residence and employment will be drastically reduced,” he anticipated.

Despite the rosy picture painted by the experts, there’re a few regulatory issues that need to be resolved before all private cars are replaced by autonomous vehicles used as shared services. Car-sharing and ride-hailing services are yet to be legalized in the city. The current system of transport requires every passenger-carrying commercial vehicle to carry a license. The vast majority of licenses are given to taxis. As car-sharing and ride-hailing services, such as Uber, come in as a form of “new supply”, it takes business away from existing operators and license holders.

Legalization itself is simple, reckoned Auyang of the Civic Exchange, because if the Transport Department really sees that high-quality on-demand private car hires are undersupplied, it may naturally introduce the service via a licensing system. Nevertheless, the issue is not about legalization, it is about managing conflicting interests of different parties, he argued. “It all depends on whether the Transport Department wants to focus on the interests of the traveling public or the interests of operators and owners.

“If new supply like Uber is introduced, there is no way existing stakeholders can be happy. But it’s a matter of engagement and consultation to inform them that public interests are at stake, and that they have carefully studied the issue,” said Auyang.