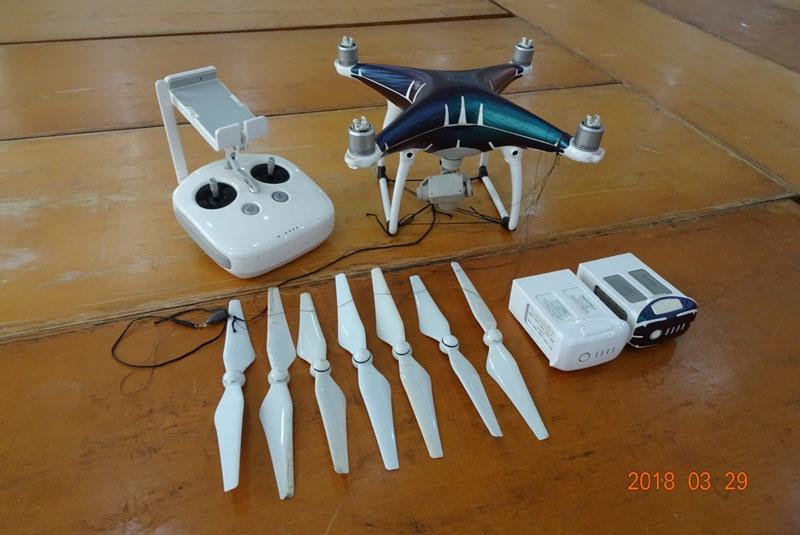 This photo dated March 29, 2018 shows drones and wires seized by the Shenzhen Customs in the crackdown of a cross-border syndicate that used drones to smuggle smartphones from the Hong Kong Special Administrative Region to Shenzhen. (ASKA CHEONG / CHINA DAILY)

A cross-border smuggling ring using high-tech equipment to ship smartphones across the Hong Kong-Shenzhen border has been busted, marking the first of such cases.

The 26 members of the cross-border smuggling ring was found to be shuttling bags of mobile phones worth some 500 million yuan (US$79.5 million)

The gadget-savvy criminals used drones to fly wires between buildings on the Hong Kong and mainland sides. Once secured, and using an electric winch and pulley system, the wires formed a high-level crossing to convey contraband from Hong Kong to Shenzhen.

The 26 members of the cross-border smuggling ring was found to be shuttling bags of mobile phones worth some 500 million yuan (US$79.5 million), mostly refurbished iPhones.

The crime ring and its ringleader, surnamed Wu, were detained after a joint operation between Hong Kong and Shenzhen law enforcement officers.

According to the Shenzhen Customs Office, the suspects temporarily attached wires using flying drones to carry the wires from two rented rooms on the 25th floor of a residential building in Luohu district, Shenzhen, to a home in Lin Ma Hang village on the Hong Kong side. Their accomplices in the special administrative region then threaded the wires through a pulley placed on the rooftop of the home.

Once a bag was attached to the wires in Hong Kong, the Shenzhen operatives would use an electric winch to retract the wires. They worked from midnight to the early hours to avoid suspicion, and the two rooms were covered with carpets to reduce the noise of the motor.

Chen Liang, spokesperson for Shenzhen Customs, said the ring's every move had been thought through carefully, as neighbors were apparently unaware of the illegal activity.

A total of 20 smartphones would be placed inside a small canvas bag and then sent from Hong Kong, ascending high above street level during their journey.

About 10,000 to 15,000 smartphones could be smuggled in one day using this delivery method. For each successfully smuggled smartphone, at least 20 to 30 yuan could be earned. Revenues could be as high as 100 yuan for each new phone. It was estimated that smugglers could make over 10 million yuan per month, despite only working for 15 days.

Acting on tips, law enforcement officers from both sides smashed the operation in February 2018 after months of investigation.

A total of 260 Shenzhen Customs officers raided the rented rooms and arrested several suspects who had just finished retracting the wires to get the bootlegged goods. Also confiscated at the two rented rooms in Shenzhen were 4,000 smartphones and tools used to smuggle them. These included several motors that were burned out from overloaded shipments and backup motors. Hong Kong Customs detained three people connected to the activity, and confiscated 900 smartphones and associated tools.

The gang, said to be operating since 2016, were comprised mostly of friends and relatives of Wu, the ringleader from Heyuan, Guangdong province.